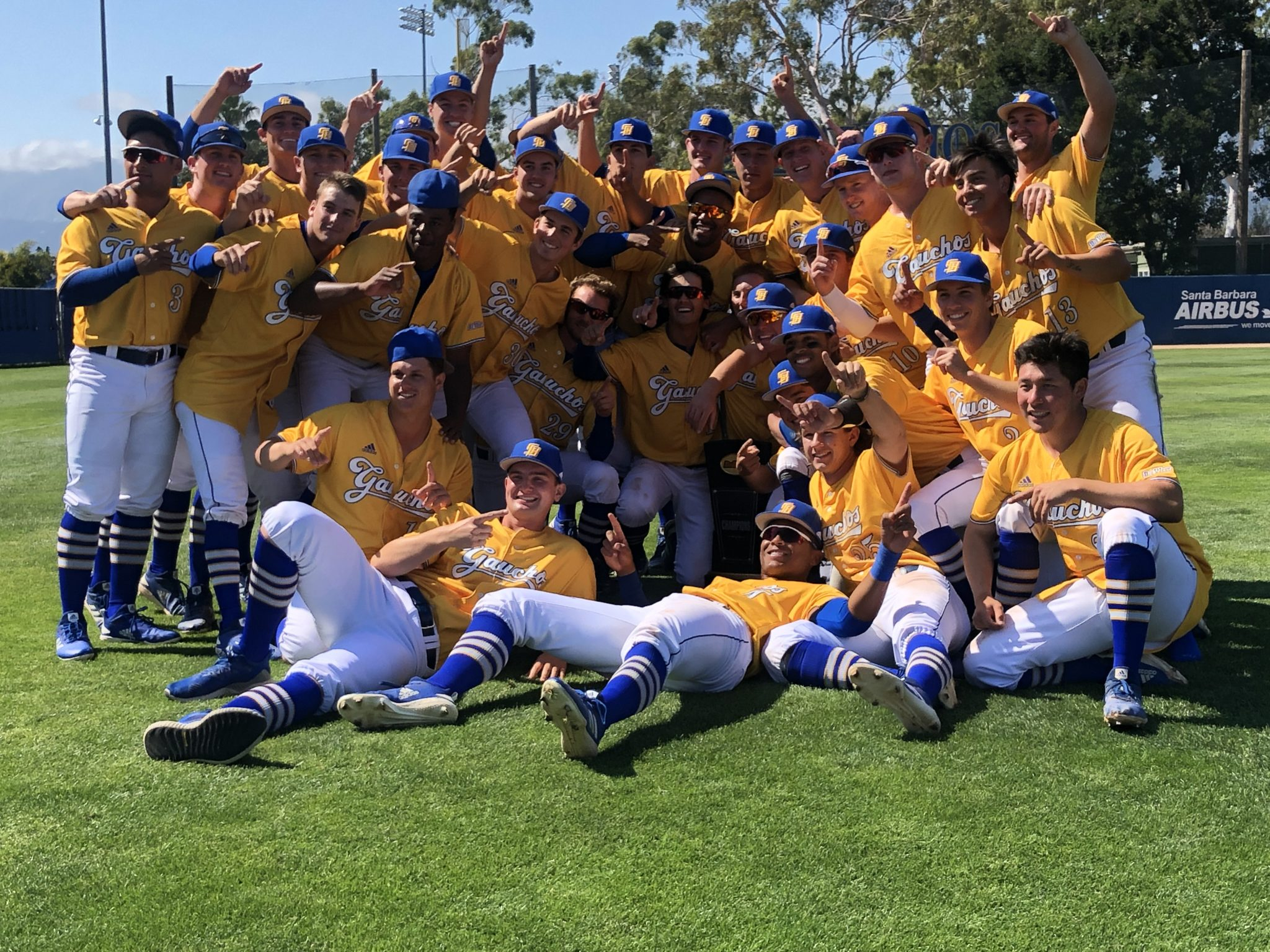 This is the third conference title in program history. Jorge Mercado / Daily Nexus

The No. 4 UCSB baseball team struggled the majority of the final weekend of the regular season, but with its back against the wall and the Big West title on the line Saturday afternoon, the Gauchos responded with a huge 7-0 win over rival Cal Poly to claim their first league title since 1986.

This is the third conference title in program history.

“We have been chasing this for a while. It means a lot. We have had some big moments but we never had a Big West championship so this means a lot,” Head Coach Andrew Checketts said.

Santa Barbara finishes the regular season 45-9 overall and a Big West best of 19-5 in conference.

The team won 14 of its last 16 ball games and put itself in a position to host its second-ever NCAA regional tournament.

With a win on Saturday, the Mustangs would have clinched a share of the league crown and would have received an automatic bid to the NCAA regionals. Instead, Cal Poly concludes its season 28-28 overall and 17-7 in Big West play.

Despite it being senior day for the Gauchos, it was the young freshman on the mound who really solidified this win for them.

At the plate, UCSB tallied a solid 10 hits to score seven runs. In the previous two games of the series, Santa Barbara had just eight hits and three runs.

The run support for Boone came early; in the bottom of the first inning, the Gauchos were able to get two across the plate, thanks to an RBI single from sophomore infielder Andrew Martinez and an RBI groundout from junior right fielder Armani Smith.

In the third, two more were runs scored for UCSB due to RBI singles from Smith and junior center fielder Tommy Jew. Jew was one of the six Santa Barbara athletes to be celebrated on Senior Day.

“We were hoping to chill today and relax with our families but we had to come in ready and locked in. To be able to celebrate with everyone is special,” Jew said.

As for Jew, the junior went two for four on the day to finish the regular season batting .282 with 39 RBI’s.

Two more runs came across in the fourth, following a triple from shortstop McClain O’Connor which brought in both a run and a sacrifice fly from Martinez to bring in O’Connor.

Finally, in the seventh, Mitchell blasted his fifth home run of the year to left field, giving his team a commanding 7-0 lead. Mitchell was a standout player for UCSB all year hitting his career-high five home runs and tying the team lead in stolen bases at 20.

As dominant as Boone was, it appeared that Checketts would let him finish the outing off. Instead, the plan was to let him get one final out before bringing in closer Chris Lincoln to finish off the score.

After striking out the leadoff batter, Boone got the call and left the field to a standing ovation for his performance.

“It was an awesome moment and an amazing feeling,” Boone said.

Lincoln came in needing just two outs to finish off the Mustangs. He struck out the first batter then got the final one to ground to third. Third baseman Jason Willow picked up the ball, spun around and launched it to Kyle Johnson at first who secured the catch for the final out of the ball game.

The team was all smiles after the ball game, with many players hugging each other and the championship trophy.

“I can’t explain it. This is probably the happiest I have been in years. I love each and every one of these guys and I just could not be happier,” senior Thomas Rowan said.

Rowan was honored last year on Senior day which is why he did not participate in the activities today.

For the past eight seasons, Checketts has accomplished a considerable amount since becoming the head coach of the program. He led the program to many bests including most wins in a single season at the Division 1 level with 45 wins this year and even its first-ever College World Series in 2016.

But getting the program’s first Big West title in 30-plus years is very special and a testament to how far this team has come.

“We struggled with our identities the past few years but this year we found it. If you’re going to come at us, you better give us your best because we are a resilient team and we don’t care who we play in the regionals. We just want to show what we got,” Jew said.

UCSB will find out whether or not they host a regional on Sunday evening at 6 p.m. Pacific Standard Time. The team will then find out its bracket at 9 a.m. Monday morning.

Jorge Mercado
Jorge Mercado is the current Editor in Chief and was a Sports Editor before that since freshman year. He prefers to be called Merk as that was his nickname given to him by the gods. Sometimes, his evil twin Mork appears. Clear eyes, full hearts, can't lose.
1 Comment
Inline Feedbacks
View all comments

And now the NCAA is chose not to allow UCSB to host–in Las Vegas–go figure. Note that the other three schools in this region all have adequate facilities. There will be the usual story about how UCSB’s field is substandard–some high schools have better facilities. The team went to the College World Series in 2016 and three years later UCSB still cannot provide a venue capable of hosting an NCAA Baseball Regional. Oh but wait they put some lights in–woo hoo. Pathetic. The coach is going to leave if the administration cannot step up and who can blame him.