The Daily Nexus
News
Isla Vista Memorial Project Receives Digital Revival for Fifth Anniversary
May 23, 2019 at 12:03 am by Katherine Swartz

Melissa Barthelemy was walking near Capri Apartments in the days following the 2014 Isla Vista tragedy when she saw an object blowing past her feet in the wind.

“There was a greeting card that was being blown down the sidewalk, and I picked it up, and it was written by George Chen’s parents,” said Barthelemy, a UC Santa Barbara public history Ph.D. candidate. 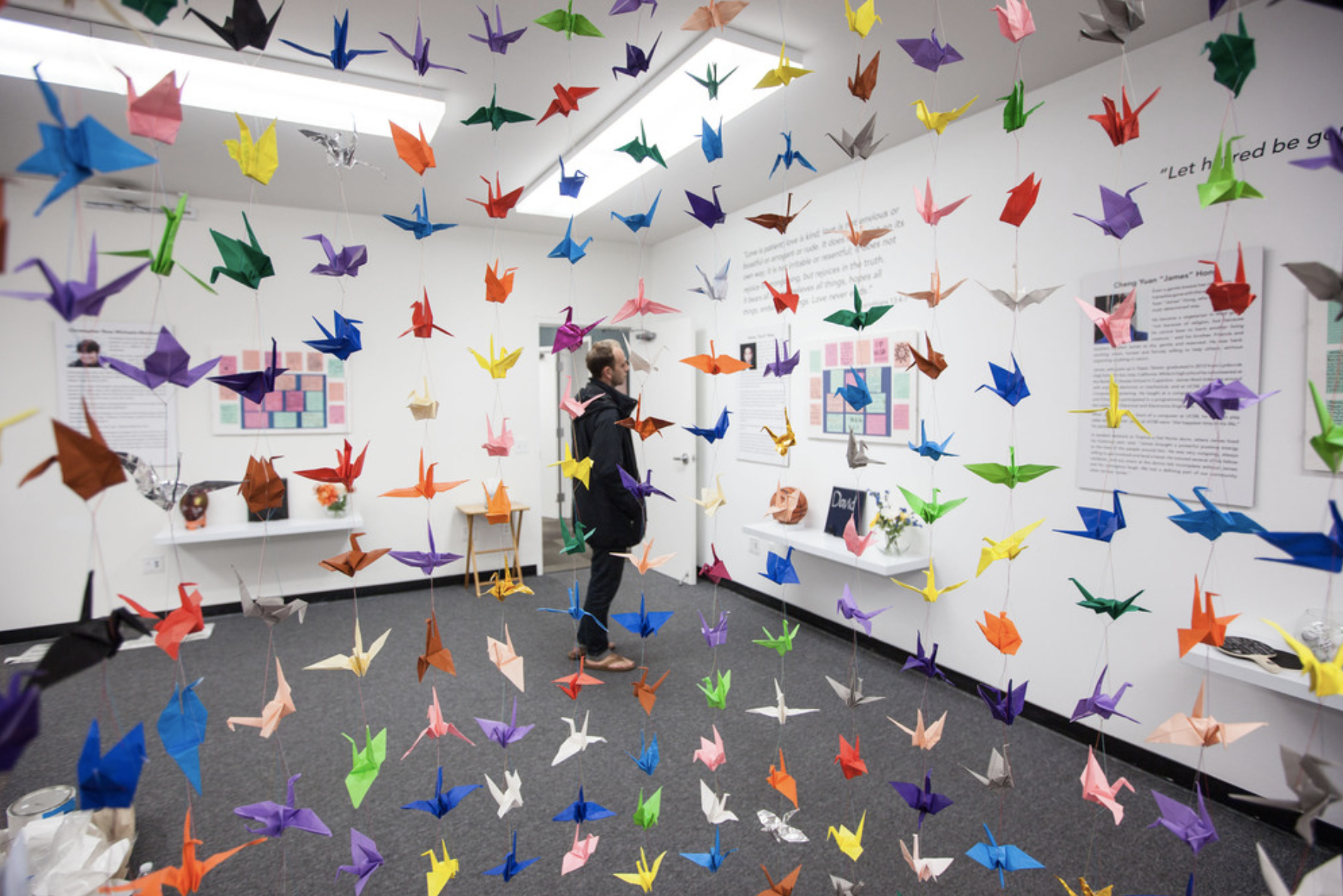 The exhibit was recreated in digital form for the five year mark of the I.V. tragedy. Courtesy of Isla Vista Memorial Project

“It was just so poignant and in that moment, I thought, ‘Wow, that was … a few feet from falling into the gutter and just going out into the ocean or whatever,’” she said. “I just couldn’t imagine [the memorial objects] being thrown in the garbage.”

In the days and weeks after the Isla Vista tragedy, people remembered the lives lost through spontaneous memorial sites, where they placed posters, flowers and other objects to remember the victims. Barthelemy began to curate these objects to preserve them in the weeks following the tragedy for a public exhibit that would be ready by the first anniversary of the tragedy.

After 10 weeks of exhibition at Old Gym, all of the objects were archived on the Special Collections section of the Davidson Library, located on the third floor. But it wasn’t until this past year that an online collection of the exhibit began to gain momentum.

This five-year project culminated this Wednesday with “We Remember Them: Acts of Love and Compassion in Isla Vista,” where the exhibit’s new website was unveiled.

The website is a recreation of the original exhibit, meant to be seen room by room, and allows users to search for specific remembrance items with detailed information.

Lauren Trujillo, a library and information science masters student at UC Los Angeles, played a key role in helping the Isla Vista Memorial Project come to fruition. She first became involved in the project as a second-year student at UCSB.

While Trujillo began working on the project because of her interest in archiving, she also had a personal connection to the Isla Vista tragedy; as a member of Delta Delta Delta, commonly known as Tri Delta, Trujillo was a close friend of victims Katie Cooper and Veronika Weiss.

Over the past year, Trujillo has been creating a website for the Isla Vista Memorial Project to commemorate the fifth year anniversary and received funding through a year-long grant at UCLA from the Mellon Foundation to do so.

Trujillo’s aim with the online exhibition was to allow people to access the materials at a time when they were ready to address what was a highly traumatic event, especially for alumni who had been around in 2014.

She also noted the importance of educating students who weren’t here for the tragedy on how the community came together.

“You can find the details of what happened that day on the Internet, but you can’t find how our community reacted and all the great things that came out of this unspeakable event … for them to see our community’s story and how UCSB and how Gauchos reacted and how we came together can help them understand the campus they belong to and the campus that they are contributing to,” Trujillo said.

The original Isla Vista Memorial Project, as well as its new website, show I.V. in a different light compared to media’s response to the Isla Vista tragedy, Barthelemy said.

“The news just grabs any photo [they] can get, which is whatever happens to be on your Facebook profile at that second. And so, for the families not to be able to choose the photograph they want to represent their loved one is a really big deal,” Barthelemy said.

This project gave those families the opportunity to choose a picture of their loved one, she added.

“You can imagine that was really emotional for them to go through photographs and choose one, and it was emotional for us too,” Barthelemy said.

As the Isla Vista Memorial Project evolved over the past five years, Barthelemy and Trujillo’s work to memorialize the tragedy has grown.

Barthelemy became the official liaison between the university administration and the families of the victims, a position she said is unique to UCSB.

But now, Barthelemy said she is ready to hand some of the responsibilities over to UCSB administration.

“I’ve been able to develop really close relationships with the family… [but] I’m going to just be able to focus more on my history work and not so much the administrative stuff, but I want the families to be very well taken care of.”

For Trujillo, continuing work on the Isla Vista Memorial Project was a way to continue healing after the loss of her friends.

“One thing that I had to realize was that trauma, you never get over it, and I had to accept that. I’m never going to get over this. So sometimes when I’m working with an object or if I see something and it makes me cry, it’s okay and I can let it out,” Trujillo said.

“But then the next day, and another day, I can continue working with these things and feel like I’m doing this for a bigger reason.”

Annie Platoff, UCSB librarian and Isla Vista Memorial Archive curator, told the audience at the opening of the exhibit on Wednesday night that working on such a personal exhibit has led to a greater political energy for those working on the project.

“You can be professional in your daily work with the materials, but we are also people with opinions who read and participate in our community … when I leave the library at night, I’m political,” Platoff said.

While Trujillo is proud of the work she has done, she said she sometimes harbored guilt about the shootings that have occurred since Isla Vista’s own tragedy.

“I felt guilty that we could have done more in 2014, and [I] should have gone out and started speaking and done more to make them stop happening,” Trujillo said. “Hopefully by sharing this online exhibition and by sharing these items in a university space, we can start conversations and we can inspire action of some sort … [these shootings] need to stop and it’s been re-traumatizing every time another community’s affected.”

“I’m blessed for what I’ve been able to do, but I do feel the sense to do more.”