May 23 is defined, each year in Isla Vista, by tragedy.

In the weeks leading up to the five year mark of the 2014 shooting, community members and officials began discussions about how to honor the six people who lost their lives that day.

It is especially important to hold these memorial events each year, several community members and leaders echoed in interviews with the Nexus, since so much of the UC Santa Barbara population that is here now was not in 2014. 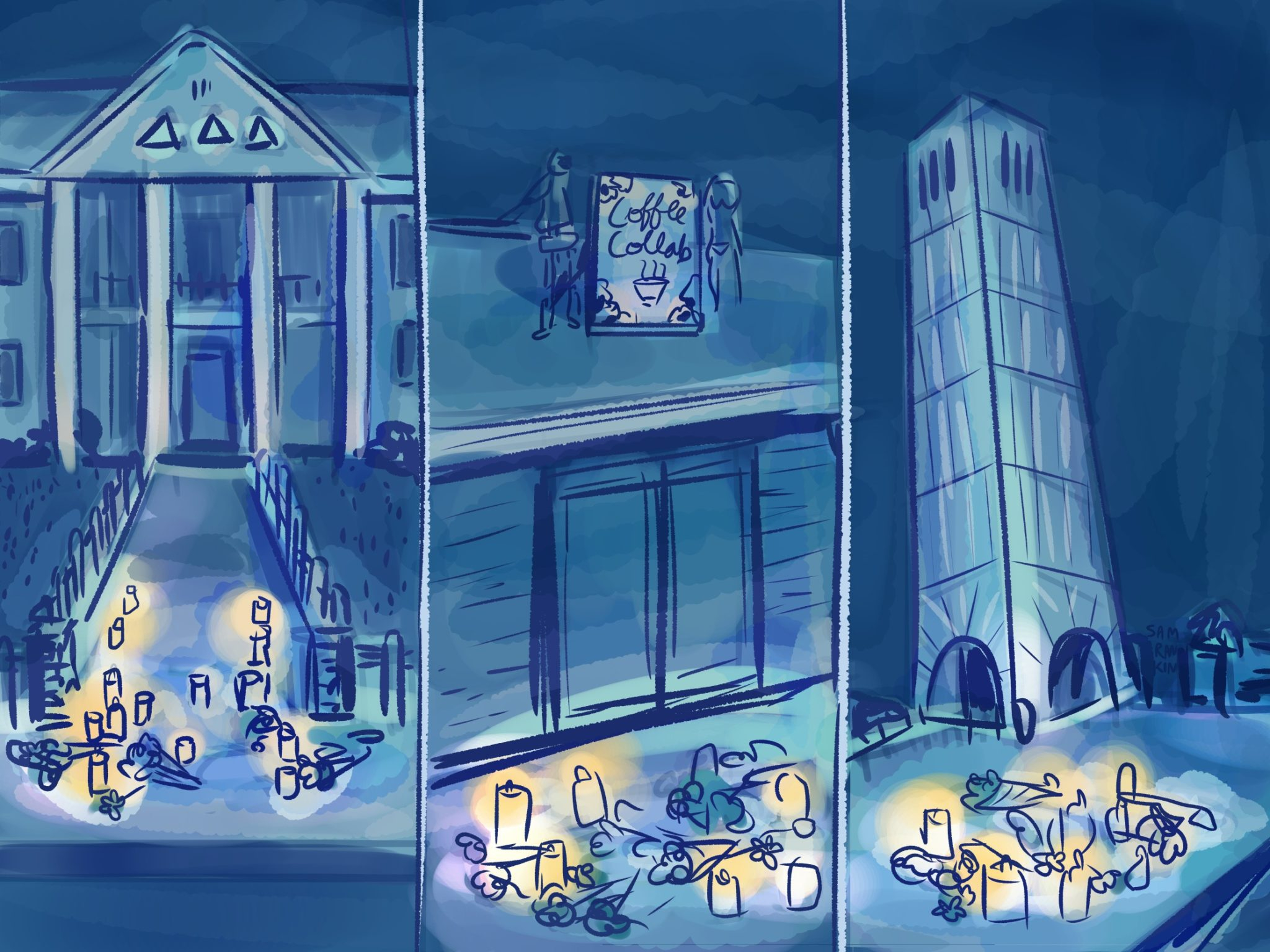 “When going forward with the planning of this, I really wanted to just make it a space of memorial and remembering,” said Jeike Meijer, former Associated Students (A.S.) external vice president for local affairs.

Meijer said her office has been working on recreating the original memorial events that students put together in the aftermath of the shooting. One of those recreations included putting up posters of the original blackboard messages that students left for the victims in 2014 by the University Center.

“We’re basically replicating that this year because we wanted to bring back the initial reaction and memory of the five year anniversary,” Meijer added.

The vigil and walk from Storke Tower to Anisq’Oyo’ Park taking place on Thursday at 6:30 p.m. is also a tribute to the initial vigil that took place two days after the shooting.

Spencer Brandt, board president for the I.V. Community Services District, spoke about how I.V.’s  high turnover rate means it can be harder for students to learn about the tragedy when they first come to UCSB.

“My generation of students wasn’t here for the tragedy. And we were the ones who sort of were watching from a distance. I know I remember the day that it happened, I remember reading about it on the news and actually talking about it with my friends just because the details were so horrific,” said Brandt, who will graduate this spring with the class of 2019.

“It’s important that we keep talking about it and that we keep recognizing just the horror of what happened, because it is so important to how our community has developed.”

With the sorority Delta Delta Delta, more commonly known as Tri Delta, closing down at the end of this year and Coffee Collaborative’s future uncertain, I.V. is losing some of the physical markers of remembrance people once used to learn about the tragedy.

In the months after the shooting, a memorial swing bench honoring two Tri Delta sisters who lost their lives in the shooting, Veronika Weiss and Katie Cooper, was given to the Tri Delta house. Coffee Collaborative has a mural dedicated to the six victims and has intentionally left a bullet hole in the window from that day.

“Every four years, we have almost an entirely new town in terms of the population and who lives here,” Brandt said. “I’ve been happy to see that at least in the instance with the Tri Delt bench that it’s found a home — the last that I heard — with parents of one of the victims.”

While the student population at UCSB essentially resets every four years, many staff and faculty members who were here in 2014 are still here today.

Katya Armistead, assistant vice chancellor and dean of student life, has been working at UCSB for 28 years and has worked to help the community heal for the past five years.

For the first time this year, Armistead said, the Academic & Staff Assistance Program (A.S.A.P.)  is putting together an event for staff members to “reflect, connect and nourish.”

The event is described as an informal space for staff and faculty members to come together and will be facilitated by A.S.A.P. Manager Kirsten Olson.

“It doesn’t feel as cohesive because now we’ll be with students who are honoring and respecting and remembering, but they weren’t necessarily here,” Armistead said. “And so this space created for staff and faculty is pretty special.”

In contrast, Margaret Klawunn, vice chancellor for student affairs, arrived on campus during Fall Quarter 2015 and said it has “been a learning process for [her] in terms of what were the impacts and how have those changed over time.”

While I.V. might be losing some of its physical reminders of the tragedy, Klawunn pointed to the lights in Pardall Tunnel, which were installed as part of a memorial project in 2015, and the Love and Remembrance Garden in I.V. as examples of how the community has created its own ways to remember and honor the victims.

As two students who weren’t at UCSB in 2014, former A.S. President Brooke Kopel said she and Meijer had been speaking to people who were at the university and could talk about the ways in which the community came together in the days after the tragedy.

“Bringing that community back together when you’re remembering is really important and making sure that that legacy and that history is being passed down so that no new generation of UCSB students ever forgets what happened,” Kopel said.

Kopel said that while people would talk about the shooting during the year, there wasn’t a “place to center yourself and focus on remembering the people’s lives” outside of the annual vigils.

The way to keep reminding students that this tragedy happened in their community just five years before is by holding these vigils and memorial events, Kopel and Meijer both said.

“You don’t want to present it in a way that’s gonna make people not want to see it or not want to remember, because healing in that way is always so hard,” Kopel said. “But I think that just by people walking past those boards, for example, maybe first years, they’re gonna stop and see it and they make initial contact with it once and they’re gonna now know that for the rest of their four years here.”

“It really only takes one instance of contact or a story passed down or knowledge passed down for that to continue on. And I don’t think that people in this community are ever gonna forget that this happened.”

why no memorial for the students david attias murdered? another rich lunatic time bomb warehoused in IV