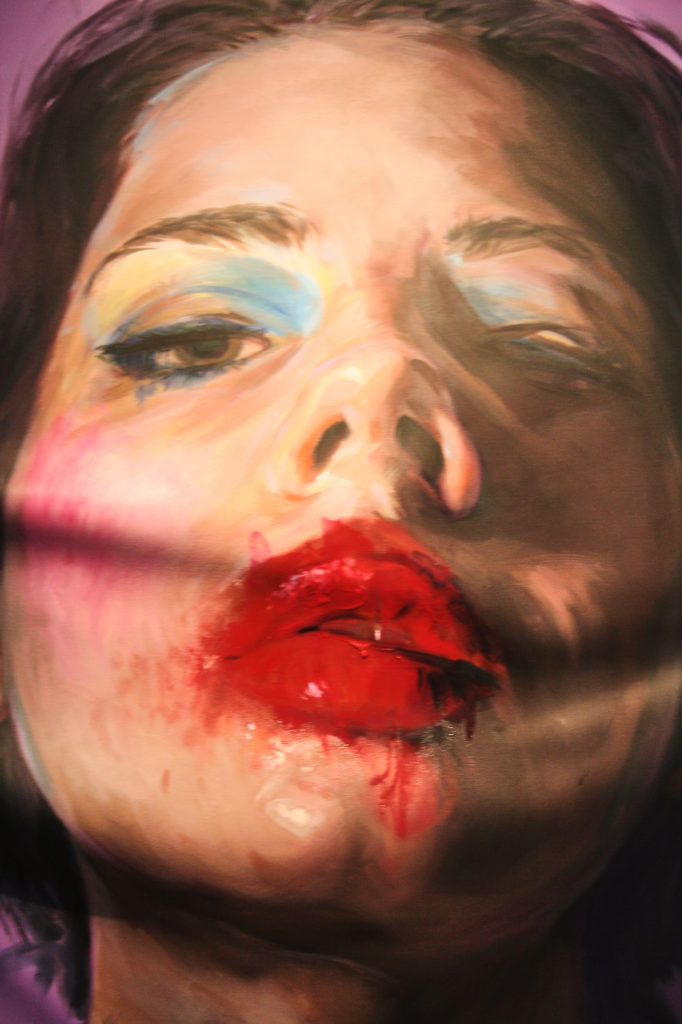 Enpsychlowmedia, the first-year review for masters in fine arts students, opened last week in the Red Barn Project Space. The show featured work from six different artists in a variety of mediums, including sculpture, painting and collage.

Upon entering the space, your eye is immediately drawn to “Untitled (Pulse)” by David Wesley White. The piece references the Pulse Nightclub shooting on June 12, 2016 in Orlando, Fla., where a gunman entered and killed 49 people, a majority of whom were gay and 90% of whom were Latinx.

During the shooting, law enforcement officers detonated five holes in the wall of a bathroom to help hostages escape. White recreates the holes inside a fence panel to “illustrate the widespread impact of orchestrated violence and homophobia — how the trauma was born out of, and can reverberate back to domestic spaces; how the barriers we create can be too weak or too strong.”

In an interview, White described the piece as a step in a new direction for him artistically in terms of political commentary, as his work has previously consisted largely of personal narrative.

Marshall Sharpe also took a similar approach in shedding light on “cultural taboos and silenced stories” in his confrontation of his family connection to slavery and the Jim Crow south.

By greatly increasing the size of old family photos, Sharpe is able to bring into focus smaller details like the name on the trucks or the fact that the photograph for “Inspection” is posed, something that may be lost in a smaller photograph.

“I hope to remind the viewer of a forgotten history by raising ethical questions about the nefarious foundations of capitalism and privilege in my own family and our culture at large,” his statement said.

“The application or removal of things like skincare masks and makeup can look simultaneously beautiful and grotesque, and can be both enjoyable self-care and sometimes painful chore,” she said in an email. “Overall, I aspire for my work, if nothing else, to assert that something as seemingly mundane as makeup or skincare can be just as meaningful to explore as any other subject of human behavior or cultural significance, and that what is seemingly decorative or ornamental can also be powerful.”

“I am interested in how dichotomies (such as between infrastructure and culture, virtual and authentic, connection and isolation, benign and profound, progressive and conservative, digital and analogue) can be broken down into nuanced conversations that embrace the physical and social possibilities of cultural and technological progress,” he said in a statement. “I think of my work as a playful way to explore serious topics, or maybe it is just play.”

He also says that his work can even be accessed as a “linguistic pun or bathroom joke,” something that is invoked within his piece “Malebox,” which is a sculpture of a man with a mailbox in his crotch.

Interspersed throughout the show are Kio Griffith’s “CHRONOTOPES.” Putting them throughout the show draws the eye through the space, while also leaving a physical marker of movement.  Made with balsa wood and pine, the sculptures have a feeling of lightness and motion.

Griffith derived inspiration for these works from his mother’s war stories, and the works portray the female side of war, which is less often portrayed.

“Now at 83, still physically healthy with a slightly developing amnesia, my mother has been reminiscing events from her youth that she would never disclose before—as in her account of the family’s long walk fleeing the Tokyo Air Raids; leaving, losing everything and told never to look back at the engulfing red inferno,” he said in a statement. 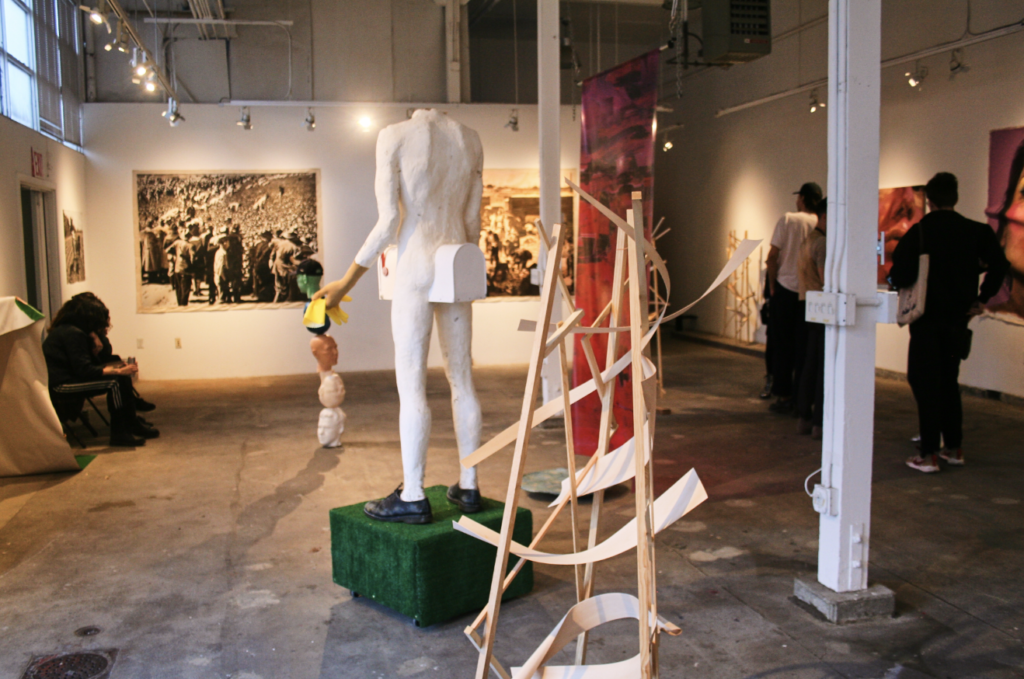 Finally, as you step into the furthest corner of the Red Barn Project Space, you are greeted by a transformed space. With fabric and black plastic covering the ceiling and blocking out light, Serene Blumenthal’s pieces take on a life separate from the rest of the show.

Blumenthal describes her work as “the cinema of attractions, meaning the power to mesmerize or make illusion while still allowing the viewer the power to see the seams of the creation of the art.”

She displayed four different multimedia works, including three different projections, video, collage, a fountain and sound. Her works also address themes of “ego death and the path or aesthetics, be it functional or dysfunctional.”

Overall, this year’s first year cohort was able to create a show that was nuanced, both visually and mentally stimulating and cohesive in its differences. 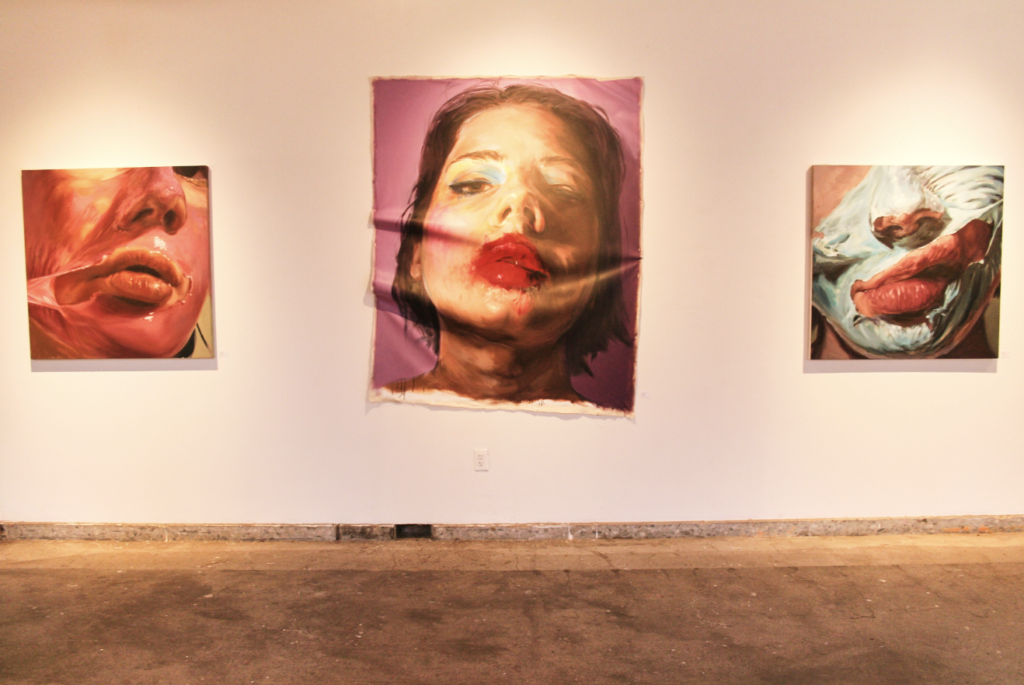