The Daily Nexus
Science & Tech
‘Bolbo’ the Builder: UCSB Researchers Investigate the Impact of Bumphead Parrotfish Feeding on Tropical Reefs
May 23, 2019 at 1:00 pm by Sean Crommelin 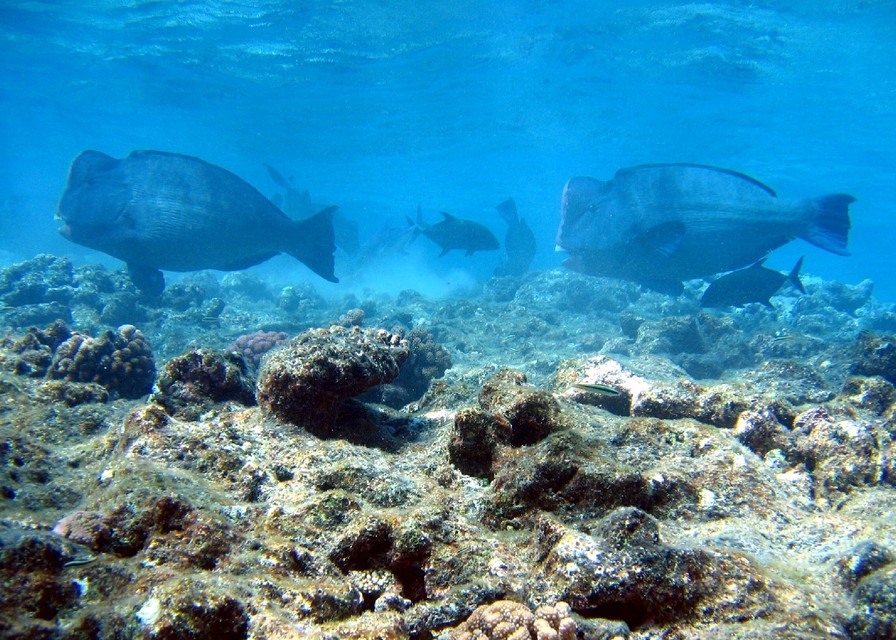 Bumphead parrotfish’s diets help shape the structure of coral reefs in breaking down coral into white sand, giving them the role of bioeroders. Especially noteworthy in the study were the creative methods used to study these enormous fish, capable of growing up to nearly five feet. / Courtesy of Wikimedia Commons

Palmyra Atoll is a small island in the Equatorial Pacific, almost due south of Hawaii. As undisturbed by humans as a place can be, it features white sand beaches, coconut palms, four o’clock flowers and, off the coast, coral reefs teeming with life.

Here, researchers follow the path of the bumphead parrotfish, or “Bolbo,” as they’re affectionately called. They snorkel behind these enormous “underwater elephants” who, through their consumption of coral skeletons, shape the shallow seas that they call home.

“Palmyra is this really pristine coral reef atoll — for the most part — that’s a thousand miles south of Hawaii. It’s a speck in the Pacific, and it provides this great system for researchers to come back to with all sorts of different questions about how coral reefs and Pacific coral reefs in particular function. People study everything there,” Grace Goldberg, a marine scientist with UC Santa Barbara’s Marine Science Institute (MSI) said.

Goldberg first began work with data from Palmyra while she was an undergraduate at Stanford University.

“I was at Stanford as a student, and Professor [Douglas] McCauley, who’s on the paper, was a Ph.D. student at Stanford. We both ended up going to the Marine Science Institute,” Goldberg said.

At MSI, they began to focus on the bizarre eating habits of the bumphead parrotfish (bolbometopon muricatum), the largest species of parrotfish.

Their diet, unusual compared to that of other primarily herbivorous parrotfish, consists of structural reef carbonates and the lifeforms that corals harbor.

“[When they’re eating] they’re redistributing the sand, so they’re taking chunks of coral. Behind that beak they have is actually like a rock crusher, and they poop out this white sand,” Goldberg said.

Their sheer size makes them integral bioeroders. These parrotfish cycle the matter of the reef and keep it moving throughout the system.

“They’re absolutely enormous and for that reason ecologically relevant in a different way than little parrotfish,” Goldberg said. “They have this role in shaping the structure of the reef — that’s why they’re called bioeroders. The coral reef is this rock structure, and the fish are facilitating breaking that down into sand.”

Goldberg and her colleagues wanted to study how this redistribution of raw materials affected the living system.

“We wanted to understand how maybe the sand, having all that calcium carbonate in the water, has some ramifications for how ocean acidification is going to affect reefs where they live. Yes, they’re moving calcium carbonate around, but they’re also moving nutrients around. We wondered whether or not they had a fertilizing effect,” Goldberg said. 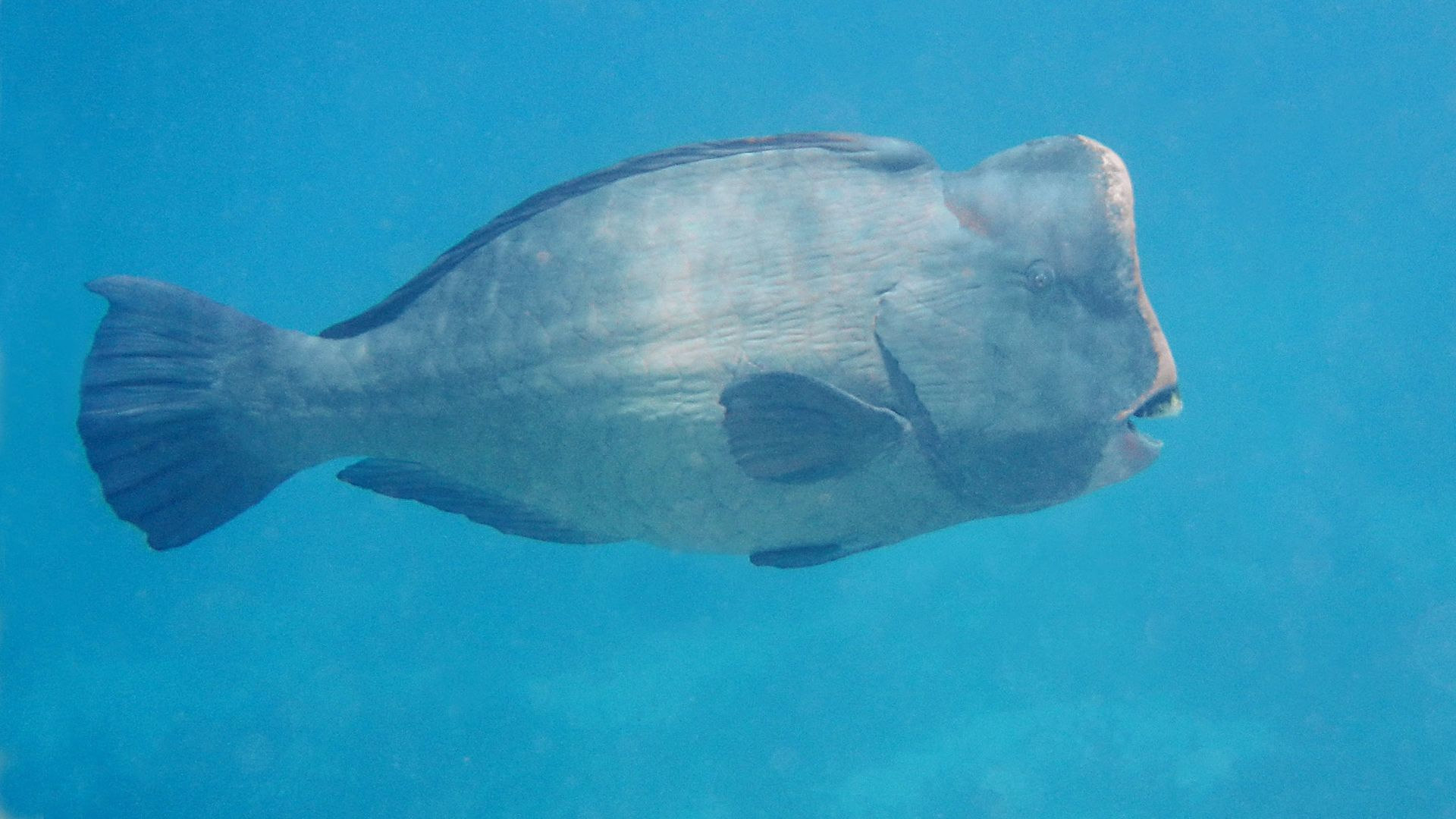 In order to gather field data, researchers in Palmyra would follow a parrotfish and mimic them when they fed on coral skeletons.

“A colleague spent days picking a fish and snorkeling along behind them, and the fish would take a bite, and they would go with a chisel and take a ‘fake bite’ next to that bite. We would have a ‘fake bite’ — of what they would’ve eaten, basically — and we’d take that back to the lab.”

Once at the lab, Goldberg and her colleagues used calorimetry in order to gauge the available energy of each “bite.” Each one was slightly different. The ratio of living-to-dead matter, as well as the manner of microorganisms that inhabited coral skeletons, had a significant influence on the quantity of energy to be found in each one.

“But then there are also areas where the coral animal has died, the skeleton is there and all sorts of things have grown over it and gone into the skeleton to live in it. When they’re eating that stuff — the dead coral substrate — they’re getting three times as many calories out of every bite.”

However, more notable than the findings itself were the technical methods with which the researchers gathered and compiled data upon returning to the lab, according to Goldberg.

Goldberg employed calorimeters that had been more commonly used to gauge the fuel obtained from burning coal in order to get a clearer picture of the sum total of everything that they were consuming through their grazing.

“The parrotfish are not just eating the food on the plate, they’re eating the plate also, and then pooping out white sand — a ground-up plate. In other research they’ve washed the food off of the plate, would be the analogy, and then measured those calories,” Goldberg said.

She is excited to see how researchers adopt this perspective and MSI’s methods in later studies.

“One thing that this paper contributes is that it shows — it kind of creates — this example of how ecologists can use these tools in materials science and new techniques in ocean chemistry to ask these types of ecological questions. I think the results … are not the most interesting thing about the work. What’s interesting is how we got those numbers and then demonstrating that to the community.”