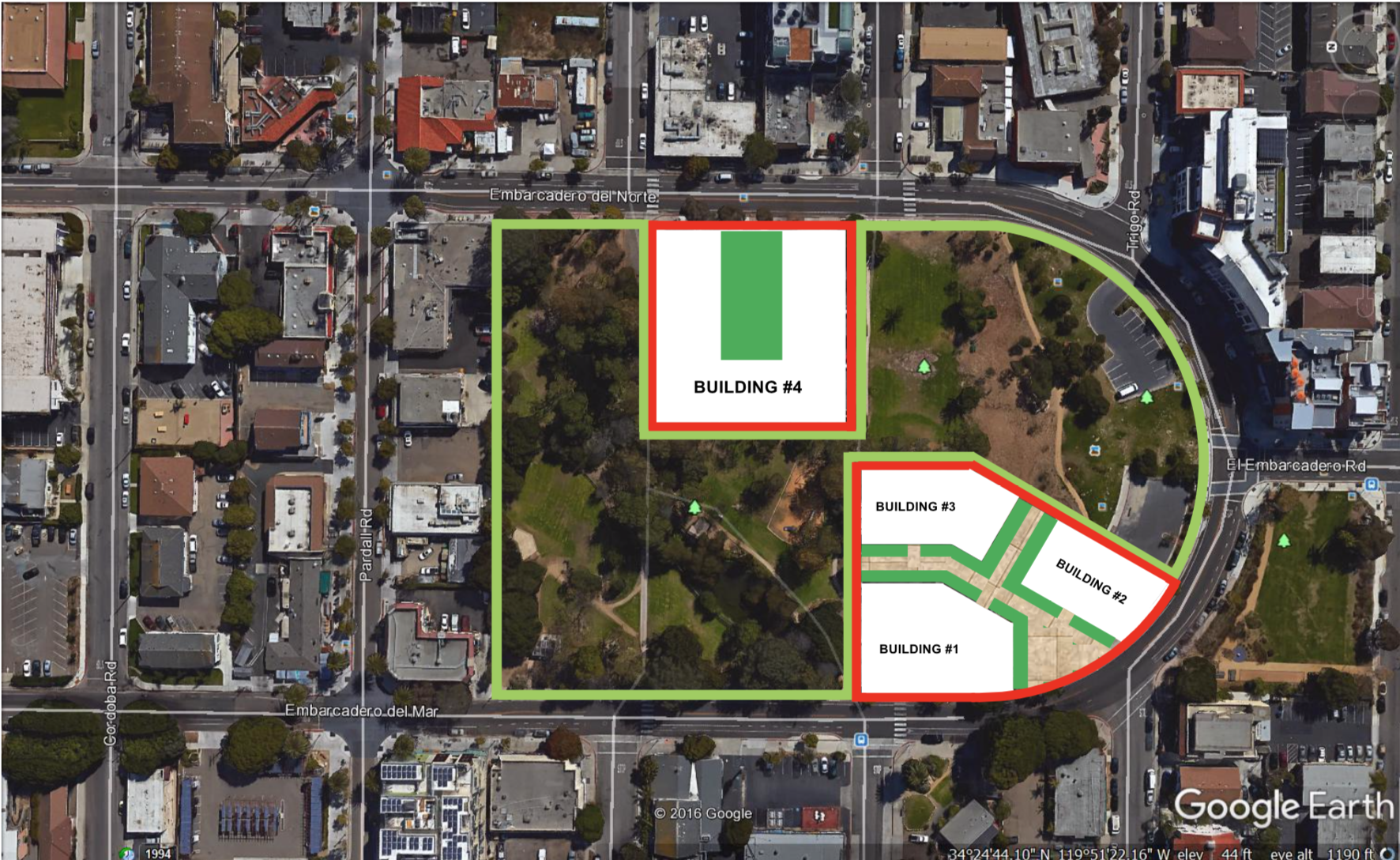 BigSpeak CEO Jonathan Wygant and Anacapa Development owner Terry Huggins are interested in redeveloping the area to increase the amount of affordable housing in I.V. as well as to create more startup/incubator spaces.

Wygant, whose family owns Embarcadero Hall and has a financial agreement with UC Santa Barbara that ends in 2026, said he and his siblings felt that the building could be better utilized than as just a lecture hall.

Wygant and Huggins were both familiar with the Isla Vista Master Plan, “a planning document for the Isla Vista area which sets forth community goals and policies to guide the future growth of Isla Vista,” and felt there was an opportunity to further develop the community, starting with the Loop.

After surveying the area, the two said they wanted to create “something that could serve the community at a higher level.”

The proposed renovations involve turning the Embarcadero Hall lot into an apartment building. The two would then renovate the strip of restaurants on Embarcadero Del Mar — Naan Stop, Dumpling King, Deja Vu and Rosarito — to a multi-story building with a lecture hall, restaurants, co-working offices and startup/incubator offices.

The building where the Isla Vista Community Services District (I.V. CSD) currently holds its meetings, 970 Embarcadero Del Mar, would become another multi-use building, housing a new I.V. Community Center and the I.V. CSD offices on the bottom floor and apartments on the upper floors.

The final building that Wygant and Huggins want to renovate is the current I.V. Community Center building, which is already under renovation by the I.V. CSD. Wygant and Huggins would relocate the I.V. Neighborhood Clinic to the first floor of this building, and then fill the rest of the bottom floor with restaurants. The upper floors would be more startup/incubator offices.

“We think that with everything that’s going on, particularly in the hard sciences out of UCSB, it could be a great place to start a business in collaboration with one of the departments or several of the departments over at UCSB,” Huggins said. “And there really isn’t anything like that in Isla Vista right now. But we’d like to provide it.”

Huggins added that the new spaces would incentivize recently graduated students to stay in I.V. because of the businesses as well, although Board Director Jay Freeman questioned whether the two had actually done research on the demand for tech companies in I.V.

The two envision all of the buildings to be four stories tall, but said none of them would exceed 45 feet in height.

In between the three buildings located on the Embarcadero Del Mar side of the Loop, Huggins envisions a considerable amount of patio space, where students can “sit outside and have a cup of coffee.”

While Huggins and Wygant don’t currently own the strip of restaurants on Embarcadero Del Mar, Huggins said he was “working on something.” Since the proposal is still in very early stages, Huggins said he didn’t want to take action on possibly purchasing other buildings in the Loop just yet.

“We’re not trying to replace the established places that people like to go in Isla Vista to eat or drink. We just want to redevelop this in a way that adds to the community rather than takes away from other people’s businesses,” Huggins added.

The two also believe that retail around this area would be “really revitalize[d]” by the renovations.

While Huggins and Wygant stressed the community benefits of the renovations, the proposal met backlash from the packed room, with several long-term residents and community members expressing concern about the potential loss of public spaces.

“Someone’s gotta say something you guys,” Pegeen Soutar, vice chairperson of the Isla Vista Recreation and Park District and a resident of I.V. for 35 years, said, kicking off public comment.

“I spent some time with both these gentlemen and I’ve tried to go into things with an open mind and my concern is always for the community, but I have concerns about even this variation of the plan,” Soutar said.

“So, I’m not, right now, seeing a benefit to the community to put things on hold or to change things that already exist right now.”

Soutar also pointed out the lack of parking allocation in the plan or any research on the environmental impact of having more people frequenting the Loop. Soutar said she respected the two for reaching out and asking the community for feedback, but said “at this point, I’m so excited for what we have already.”

Isla Vista Food Co-Op General Manager Melissa Cohen echoed Soutar’s comments, pointing out that having that many UCSB students on that side of the Loop would cause a slew of traffic problems for cars, bikers and pedestrians.

Another community member stood up, pointed at the proposal sketch and dryly said, “Welcome to Los Angeles, eventually.”

Once public comment was over, the I.V. CSD returned to its discussion and questioning. All the board members expressed concern with I.V. losing the public spaces that it very recently created for the community.

CSD Director Father Jon-Stephen Hedges said he was uncomfortable with the idea of people coming in from the outside and changing the landscape of I.V.

“All of this is a process of questions, and questions are important. But there is also a visceral reaction that I’m sure some of us in this room have which is somehow beyond those questions,” Hedges said.

“At least three of us remaining on the board sit here because… one of our taglines was ‘nothing for us without us.’”

“Visioning is something best done by those who will live out that vision rather than those who have good ideas from the outside. That’s not to say that good ideas can’t come from outside,” Hedges said. “But I’m not ready for this, I’m really not.”

Huggins and Wygant plan to take all the feedback they received into consideration before deciding how they want to proceed. They both anticipate being present at future I.V. CSD meetings and will continue speaking with community members about how to make their proposed renovations more community-friendly.

A version of this article appeared on page 6 of the May 16, 2019 print edition of the Daily Nexus.
Print