The Daily Nexus
Previews: What's Going On
Playboi Carti Set to Headline Extravaganza 2019
May 13, 2019 at 9:26 pm by Artsweek Staff

A.S. Program Board announced the performing acts of Extravaganza 2019. This year’s lineup features an eclectic mix of indie, electronic and rap artists for the event, which will be held at Harder Stadium on Sunday, May 19. Listed below are the five artists slated to perform. 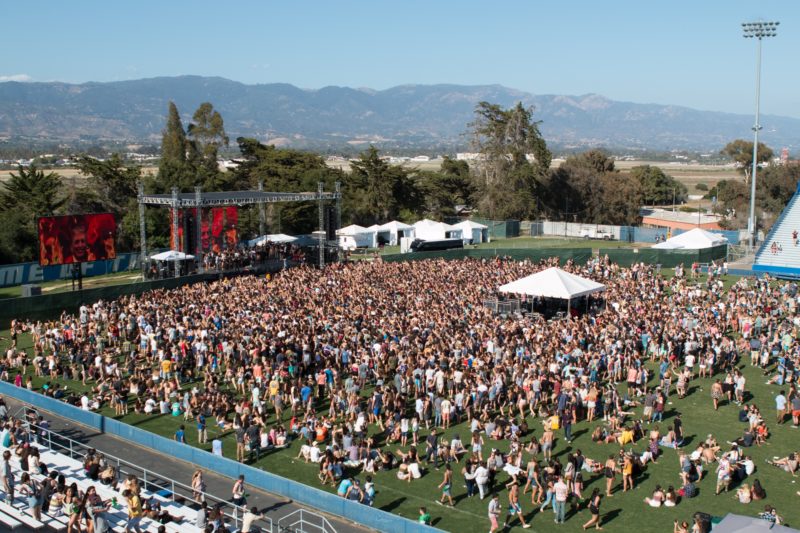 Making the trek from Vancouver to Santa Barbara this coming weekend, Peach Pit, an indie-pop band of four, will mesmerize us all with their smooth coffee-shop tracks. The band has broken past the realm of YouTube with the release of their 2018 album, Being So Normal. Known for their soft and slow hits “Peach Pit” and “Alrighty Aphrodite,” the band features euphonious guitar solos and metaphorical lyrics that create a unique sound differentiating the group from their indie contemporaries. From quitting minimum-wage jobs to joining the lineup for Tennessee’s Bonnaroo festival, the gentlemen of Peach Pit will surely ignite the music scene in the near future. Peach Pit is the perfect ending to a spring day at UCSB, gracing the stage with a qwarkly, hipster aesthetic and stealing the hearts of alternative enthusiasts everywhere.

Widely known for his single “Five More Hours,” deejay Deorro is set to perform at Harder Stadium this year. Deorro was born in Los Angeles and started his music career at the age of 14. His rising popularity over the past two years has been in part due to deserved support from collaboration with heavy-hitting artists such as Steve Aoki, Diplo and Carnage. Deorro has attracted an unwaveringly loyal fanbase, known as “PandaFam” — a strong testament to his musical craftsmanship. His newest single, “Keep It Goin,’” features Danny Avila and is distinctly fast-paced, involving dramatic buildups and drops. His Latin-themed songs like “Bailar” are festive and exciting as well. Whether or not you are a long-standing Deorro fan, his music is sure to get you moving. Offering a blend of both quick, hard drops alongside more melodic and danceable rhythms, his deejay set is sure to complement the rap headliners of this year’s Extravaganza.

Lorely Rodriguez, better known as Empress Of, is making an appearance at this year’s Extravaganza. As an American singer/songwriter who has made a name in the indie music industry since 2012, her electric pop style incorporates notes of contemporary R&B. Along with her popular feature with Khalid on DJDS’s song “Why Don’t You Come On,” Empress Of also appeared in Lana Del Rey’s album Love and reached the top 10 on Billboard charts in September of 2015. With her recently released album, When I’m With Him, Empress Of has garnered a loyal fanbase on platforms such as YouTube and Spotify.

Portland rapper Aminé, born Adam Aminé Daniel, made waves within the hip-hop community with the release of his debut single, “Caroline,” in 2016. This record, which peaked at No. 11 on the U.S. Billboard Hot 100 chart, was commended by critics and fans alike for its witty lyricism and uniquely eccentric production, and it went on to become one of the defining tracks of the year. Aminé’s second viral hit, “REDMERCEDES,” is remembered for its controversial music video, in which the rapper uses whiteface as he satirizes racial stereotypes prevalent within the hip-hop community and across the nation. His debut album, Good For You, garnered a largely positive response and introduced him to a much more diverse fanbase, as his music was compared to that of the likes of Missy Elliott and Lil Yachty. Aminé’s sophomore project, ONEPOINTFIVE, was released last August. The rapper recently wrapped the European leg of his tour in support of the album and is scheduled to play several festivals in the U.S. and Europe this summer.

As one of the pioneers of the next generation of hip-hop, Atlanta-based rapper Playboi Carti continues to forge his own path and defy the conventions set by those before him. His musical style relies less on elaborate lyricism and more on catchy flows and production. After generating much hype and anticipation amongst his fanbase, Carti’s eponymous debut mixtape was released in April 2017 and spawned hit tracks such as “wokeuplikethis*” and “Magnolia.” \That same year, Carti was named in XXL Magazine’s prestigious Freshman Class list, which is credited with catapulting the careers of many up-and-coming rappers. Last May, Carti released his first studio album, Die Lit, which debuted at No. 3 on the U.S. Billboard 200 chart. The project garnered largely positive reviews from critics, with Pitchfork Magazine labeling it as an “album that works almost completely from its own lunatic script.” Carti is set to perform at the Governors Ball Music Festival next month and will join fellow rapper Wiz Khalifa as a special guest on tour this summer.