The Daily Nexus
Self Study
Unpeeling the Layers of Identity: What “Asian-American” Means To Me
May 7, 2019 at 5:00 am by Pei Ja Anderson

Lucy Liu, famed Asian-American actress and one of the three Charlie’s Angels (in the 2000 reboot), will receive a Hollywood Walk of Fame star next to Anna May Wong, the first Chinese-American actress to grace American film screens. Last year, “Crazy Rich Asians” racked up $238.5 million at box offices worldwide. Asian-Americans are breaking the bamboo ceiling with a bang.

2019 is the year of Asian-American representation in pop-culture and media. We are no longer being portrayed as racist archetypes, and we headline mainstream TV shows that don’t even center around racial identity. With this progress set in motion, it seems that the era of orientalism is finally coming to a close.

But despite my physical appearance, I am not an Asian-American: I am an imposter. Adopted from China at seven months old and a lifetime resident of California, I feel more out of touch with my Chinese heritage than my Caucasian roommate minoring in Mandarin. 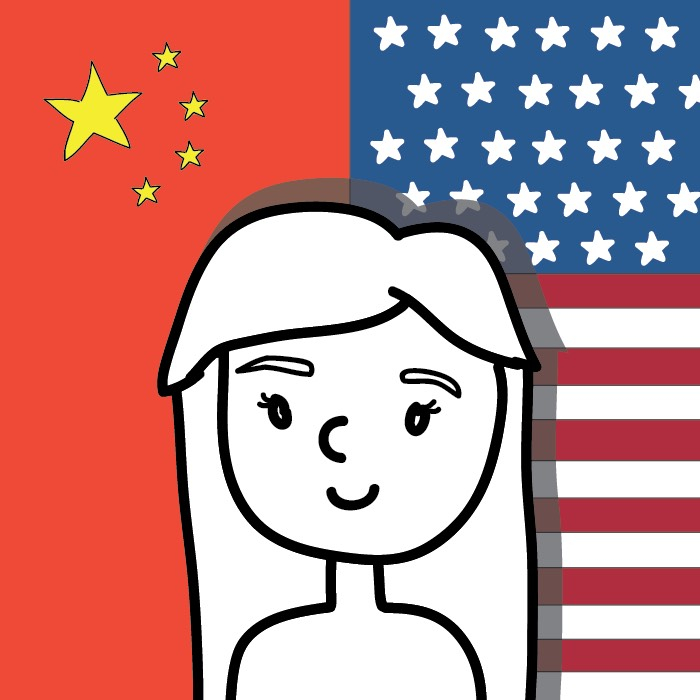 Yes, my parents are white. No, they’re not religious. Yes, my sister is also white. No, I don’t even speak a word of the language. My parents are not my saviors. I am not their token Asian brainiac. We are your average family.

Technically, I am a Chinese immigrant. But my mother and father were born and raised in the suburbs of Illinois. My parents have never faced language barriers, filled out immigration forms or sacrificed the comforts and culture of their native country. My dad made salmon and asparagus for dinner, and my mom and I went out to eat at our favorite burrito dive. I was raised in a family that religiously watched the Super Bowl every year and ate Belgian waffles at the farmer’s market on Sundays.

I’ve never had a close Asian friend. I grew up in a white family in a predominantly white community and attended a private high school. I was one of the only “yellow” faces on campus. I don’t speak a lick of Chinese and was enrolled in Spanish.

Of course I didn’t go about my life purposefully avoiding Asian people and consciously isolating myself. There was no reason I didn’t have friends who identified as Asian. There was just no reason to pluck people out of my community who were Asian and force them to be my friend, to racially profile and try to force myself into a community in which I have never felt welcome or sought out to be included.

According to my former Chinese roommate, I am a “banana”: “yellow” on the outside, white on the inside. An Asian shell covering a mushy white interior. I was offended at first. Yes, the color analogy to define racial appearances is harmful, but there was a grain of truth in my “banana”-ness.

A “banana.” This term is white-washed. An exclusionary and divisive ideology that dictates who’s Asian and who’s just, well, faking it. A “banana” wears Rainbow flip-flops and doesn’t speak the language of their home country. But why is the authenticity of Asian-ness questioned and compared? Why is my roommate who speaks Chinese, reads Korean and is on the board of the Korean American Student Association (KASA) more Asian than me?

I have denied my “banana” status for as long as I can remember. I ticked off the “Asian/Pacific Islander” box on every form and questionnaire. I was president of my high school’s Asian Student Union club. I attempted to learn Mandarin on Duolingo (I never passed Level 1). I played classical piano and proudly identified as a person of color.

Why is my roommate who speaks Chinese, reads Korean and is on the board of the Korean American Student Association (KASA) more Asian than me?

But my identity was thrown into question when I accompanied my friend to the UCSB Chinese New Year celebration in the Loma Pelona Center in February.

Red streamers draped from the ceiling and gold-lettered posters distracted from the usual recreational feel of the space. Circular tables were occupied by students and faculty I had never met or seen before. The fluorescent lights dimmed and my friend and I watched dance performances, songs and short clips of students in Chinese 5. The room vibrated with applause after each performance, friends cheering for their friends, performers giggling in embarrassment, supporting this display of what I finally realized was an authentic Chinese celebration.

At one point, the Chinese professor of the friend who brought me approached us with a warm smile, excited that my friend had included me. The professor looked at me and immediately began to speak in Chinese. My face fell flat. I was outed: the “banana” of the bunch. My mushy white interior was revealed from head to toe, from my scrunched, confused eyebrows to the Birkenstocks on my feet.

Food from Madame Lu, a restaurant downtown, was brought in and served buffet-style at the end of the room. My friend and I stood apart from the crowd, people-watching and eating when we saw my former roommate from last year, the “banana” accuser. I use the word “accuser” with the lightest and most satirical tone, as she is one of my favorite people on this campus.

Having lived apart this year, it dawned on me that I missed our conversations about Chinese culture: me, humming the tune of songs that were in the performances and her, translating as best she could to find them on Spotify. Our conversations were mostly normal chit-chat, but I always walked away feeling like I gained a little piece of the lost culture I didn’t realize I had always yearned for.

As I left the LPC that night, chowing down on food whose names I couldn’t pronounce, I stopped being in denial and accepted my “banana”-ness. It wasn’t a derogatory term. It didn’t make me less of a person. I was an Asian-American. These dual identities no longer existed in contradiction with one another; I was no longer in conflict with myself.

Passing by Davidson Library, hearing the chatter of languages I can’t understand from the mouths of people who look like me but have life experiences and a security in their cultural identity that I will never know, I’ve begun to distance myself from the technicalities and physical appearance that superficially dictate my race.

Being a “banana” divided my exterior and interior into a dichotomy I refuse to engage with anymore.

Among the Asian communities and spaces on UCSB’s campus — KASA, the Taiwanese American Student Association (TASA), the Vietnamese Student Association (VSA) and multicultural Asian sororities — the limit to which I belong to the Asian community is finally revealed to me. While we share a similar exterior, my “banana” identity sets me apart. Beyond the surface of every individual is a deeper and complex manifestation of quirks and strengths, flaws and contradictions.

These limits were important to accept. Difficult because of the years I spent in denial, but integral to my understanding of what Asian-American identity is. I used to measure my self-worth by how confident I felt identifying with each culture and was constantly concerned with simultaneously being authentically Asian and authentically American. I pulled apart these identities from the hyphen that bonds them but never felt that I had succeeded in wholly being either person. Assigning value to my Asian and American traits was a fool’s errand.

Calling me a “banana” isn’t accurate enough. Being a “banana” divided my exterior and interior into a dichotomy I refuse to engage with anymore.

At the root of my uncertainty was shame. It dictated my self-worth in toxic ways that kept me believing I had to choose one. Examining the hierarchy of Asian-ness against an American landscape was never going to liberate me.

Creating space for deeply assimilated American immigrants is crucial. Putting value in my intellect, inventions and ideas instead of the assumptions people saw in my appearance allowed me to forgive myself.

Today I have no shame in saying I am a Chinese-born American (and I like it that way).

Pei Ja Anderson wants you to remember to forgive yourself and accept your perceived weaknesses as strengths.