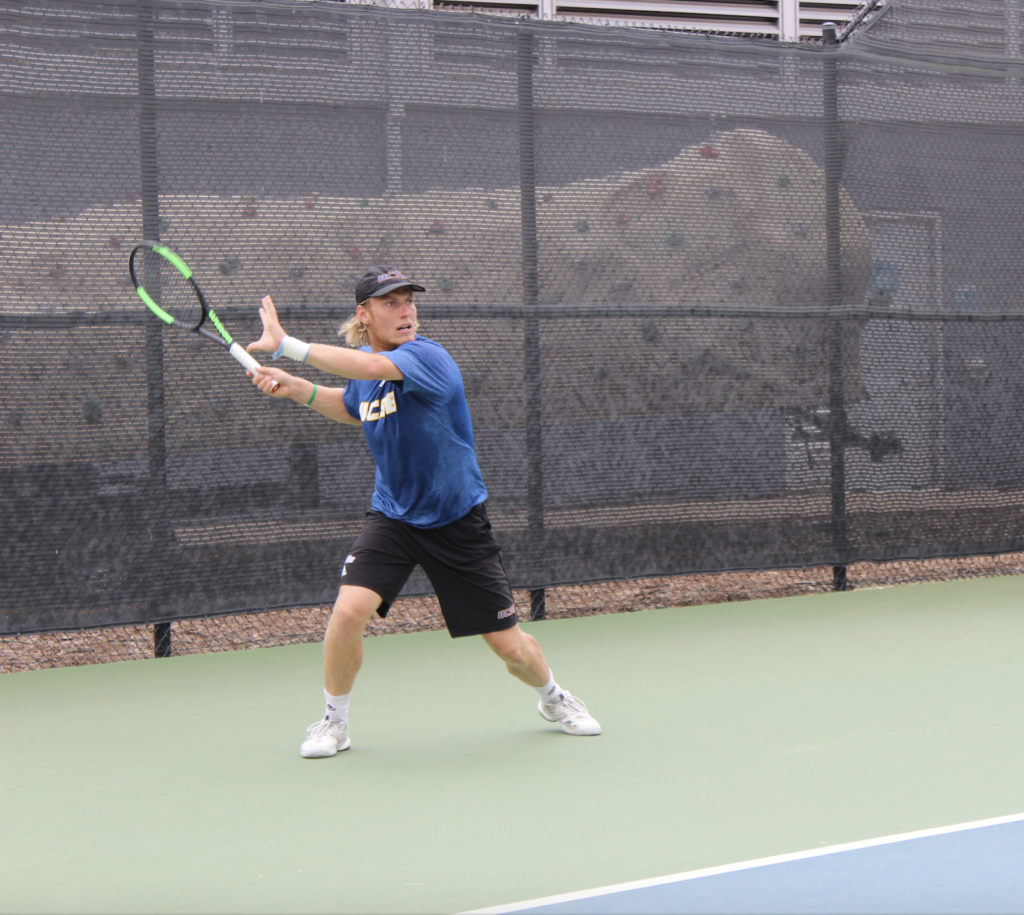 Five straight Big West Tournament titles. I repeat, FIVE straight tournament titles. UC Santa Barbara’s (16-6 overall, 7-0 Big West) 4-0 victory over Cal Poly (14-10 overall, 5-2 Big West) Sunday morning clinched it a spot in the NCAA tournament, where the Gauchos will look to get their first NCAA win since 1998’s defeat of Oregon in the Round of 64.

The win today also marks the 32nd straight Big West victory for the Gauchos as Head Coach Marty Davis gets his 10th NCAA tournament win in 16 appearances at Indian Wells.

Unfortunately for Cal Poly, its hot finish to the season could not be sustained, as junior Antoine Noel and freshman Gary Vardanyan’s doubles win on court two proved to be the Mustangs’ only triumph of the day, handing UCSB’s junior Joseph Guillin and sophomore Victor Krustev just their second doubles loss of the season.

That loss was also UCSB’s first doubles loss to a Big West opponent, though senior co-captains Nicolas Moreno de Alboran and Anders Holm got the Gauchos off to a hot start on the top court with a 6-4 victory over Cal Poly studs Josh Ortlip and Dominic Bechard. That was the tandem’s eighth straight match win.

One of only two California natives on the team, sophomore Joseph Rotheram and his Spanish-born doubles partner, junior Alex Dominguez Soto, sealed the deal with a 6-3 win on court three, allowing UCSB to take two of three in the doubles game.

Senior Hironori Koyanagi was the first to leave the court, however, as his prowess was on full display with a 6-1, 6-3 score, giving the Tokyo native five straight singles victories.

No. 58 Guillin redeemed his doubles loss with a dominant 6-0, 7-5 showing that brought UCSB within one of a sweep.

It was No.115 singles player Victor Krustev who, despite losing the lone doubles match alongside Guillin, clinched the championship with a 6-2, 6-4 showing over Cal Poly’s Alex Stater. The court win allowed Krustev to improve to 14-4 on the year and 13-4 when on court three.

There’s been some talk that this being UCSB’s fifth straight Big West title might dampen the excitement, but Head Coach Davis was quick to refute those claims, exclaiming that the “special group of seniors leading this team want to get it done, for this program, for themselves, for our fans, everyone.”

Davis will be looking to add an NCAA win to his illustrious career as the Gauchos seek their first tournament win since the 1998 victory over Oregon.

The NCAA Team Championships will kick off Friday when UCSB takes on Texas Tech in the first round of the tournament.