Since last spring I’ve become increasingly convinced that an invisible gymnast has been controlling much of what I see. Although many of you are probably under his spell too, he’s not indigenous to Isla Vista — gymnasts like this one are everywhere and they pop up when we least expect it, leading us in acrobatic dances around difficult truths, obscuring our surroundings and prompting us to act in ways that we might otherwise balk at. But before you start looking around for my tinfoil hat, I should explain what I mean. 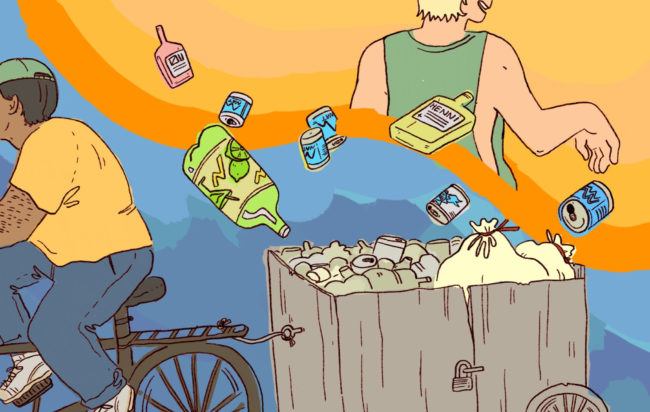 If you live in Isla Vista or the surrounding area, you’ve probably encountered one or more of the people we’ve collectively termed “can fairies.” Often much older than the overwhelming majority of sunburnt 20-somethings, can fairies are solitary scavengers who roam the streets of I.V. toting bulging, sour-smelling trash bags full of discarded bottles and cans. Can fairies and students don’t really mix: maybe you nod or flash a tight-lipped smile as you bike to class or walk downtown for a bite to eat, or exchange bilingual pleasantries as you stoop under the beer die table to help them collect the day’s haul of empties. However, chances are that’s the extent of most interactions many of us have had with can fairies. At a cursory glance, it’s a mutually beneficial relationship — but this is just what the gymnast wants you to believe.

Last year I lived out in the boonies, at least by Isla Vistan standards. My duplex was perched on the far corner of I.V. — a stone’s throw from my former dorm, which could be seen towering impassively through my kitchen window. Maybe that’s why whenever I sat on our balcony after sunset in a post-dinner stupor, listening to the endless thumps and mumbled triplets blasted through a neighbor’s tired speakers as they happily tossed the night away, I felt somewhat removed from the larger community.

Can fairies are solitary scavengers who roam the streets of I.V. toting bulging, sour-smelling trash bags full of discarded bottles and cans.

It was on those nights that I first noticed my neighbors across the street, whose rusty Chevy panel van would shake and creak as the elderly couple called it a day. They would clamor over the crinkling, clinking, crashing mountain of salvaged bottles and cans that occasionally spilled out the back of the van and onto the road. At the time their noisy repose signified nothing; it was just a softer accompaniment to the sounds of trap and laughter, wafting over the tops of eucalyptus trees.

I’d like to think of myself as a fairly empathetic and giving person:  If I saw a friend in need, I’d gladly provide whatever help I could. But I didn’t offer any help to the couple in the van — I didn’t even think twice about it. Ignoring their ongoing struggle with extreme poverty right outside my door, while simultaneously maintaining the lifestyle of an affluent college student, is a sort of paradox, and it would have been crippling to see it for what it was and do nothing. Mental gymnastics makes ignoring your neighbor’s suffering much easier.

As Leon Festinger — the psychologist who first described cognitive dissonance — puts it, to reduce cognitive dissonance “a person… can even distort his perception and his information about the world around him.” If we aren’t seeing things for what they are, then we can still keep our morals intact and go on, business as usual. This distortion is the gymnast’s specialty, and morals are his medium. I can see now that, with the help of my gymnast, I was carefully avoiding my neighbors and their struggles. My gymnast and I twisted, flipped and spun around moral obstacles, performing contortions that from a different perspective could appear improbable or astounding.

My gymnast helped me look at  my neighbors without seeing them. We interacted fairly regularly. Most mornings I would shuffle around the back of my house to my bike, still sore from lack of sleep the night before and come face to face with the man rifling through my garbage cans, bag in hand. I’d smile and say hello. He’d flash a nervous greeting from under the brim of his sunhat and that would be that. I never made an effort to get to know him — after a year of living so close to each other, I never learned his name. To me he was just another can fairy. A part of the backdrop that is life in I.V.

It begins with a conversation, a real one, with the next person who slips into our backyards to collect our empyies or check your bins for misfiled bottles.

I’m tired of living with my moral gymnast. I’m tired of avoiding eye contact with people I know deep down could really use someone’s acknowledgement. I’m tired of pretending like I don’t know most can fairies likely make around $40 a day, working sunrise to sunset. I’m tired of not knowing my neighbors’ names and I’m tired of feeling guilty and still doing nothing to change that. It’s too late for me to get to know my old neighbors. I’ve gone back to my old street and looked for them, but their van is gone. Maybe they found a more hospitable place to stay — I certainly hope so. And I hope my struggle to get my gymnast out of my head is a personal one, but I’ve seen too many other people in I.V. vault up and get themselves out of the way of seeing their neighbors to believe that’s the case.

But, it’s not all doom and gloom. We Isla Vistans are uniquely poised to evict our moral gymnasts once and for all. I.V. is now a sort of Neverland, toeing the line between reality and myth. We live (to paraphrase Lewis Hyde) in a place halfway between a slum and a library — an island of endless shabby apartments where throngs of shoeless idealists are free to let their imaginations run wild. Isla Vista rests on a lengthy volume of history, much of it fairly unpleasant. From wetland to parking lot, Chumash land to bean farm, open pit mine to proving ground for environmental and social activists — we live in a place that has seen a lot of suffering over the decades and centuries. Yet, it is this history that gives us an opportunity to learn from the mistakes of previous residents.

Our gymnast-aided denial of the existence of can fairies represents a chance to bring the myth of Isla Vista closer to its reality. It begins with a conversation, a real one, with the next person who slips into our backyards to collect our empyies or check your bins for misfiled bottles. What we do to reduce dissonance is ultimately a conscious choice: we can continue to distort, obscure, and contort our perception to avoid facing uncomfortable facts, or we can brush up on those two years of high school Spanish quickly fading from memory and change our actions instead.

whoa, beautifully written and empathetic critique of the culture. thanks for this. the firm boost i needed to shift my behavior and confront my gymnast too.

Cool, that’s not what cognitive dissonance is tho

I don’t know about “can fairies but back when I was young we just called them (me/us) Dumpster Divers or Scroungers. “Can Fairies” would have been far too effeminate (and even insultingly offensive) a term to apply to us since we were much grungier, earthy and far more down to Earth and real to be anything even remotely fairy-esque even to the slightest degree. No, it just wouldn’t be right to call a tough, street hardened, long-haired, jean and flannel clad, leather boot and vest wearing Dumpster Diver a “fairy” of any kind.

I see the positive intention behind this article, but calling a group of real people in the community by the name of a mythical creature (fairies of all things) comes off as dehumanizing and strange. As the comment below notes, it is definitely not universally practiced. Also, some of the descriptions in the article of these people as “scavengers” “toting sour smelling garbage” “primarily hispanic” who “don’t really mix with students” came off as more than a bit overgeneralizing, crass and offensive…