UC Santa Barbara’s Pan Asian Network hosted a rally late Thursday morning on April 18 to hand its list of demands to the UCSB administration in Cheadle Hall, marking one of its first tangible steps toward accomplishing its demands. 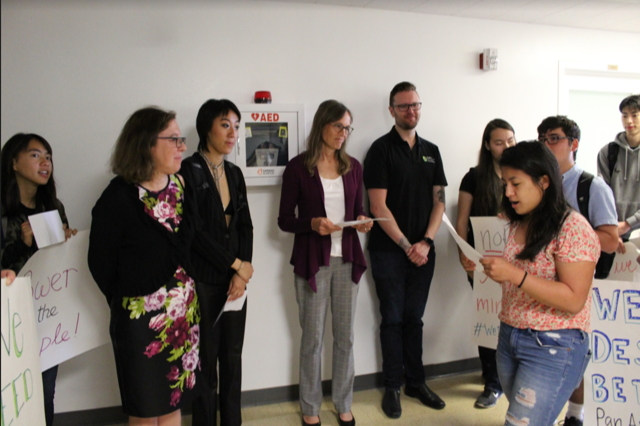 Protestors gathered outside of Cheadle Hall where speakers from Pan Asian Network, Asian Pacific Islander Graduate Student Association (APIGSA) and the Asian American Studies Department spoke about their experiences at the university and grievances they hold with the university.

Several speakers talked about the lack of resources allocated for Asian and Asian American students on campus, with some noting that almost one third of UCSB’s student population identifies as Asian.

Smita Narasimhan, social media coordinator for Pan Asian Network, talked about the failure of the university to recognize the many identities within the label of Asian or Asian American.

“We come from so many diverse cultures, languages, religions and we need to embrace all of that, but by designating all of us under one umbrella with one word, that’s taking all those differences away,” Narasimhan said during the rally.

Narasimhan said she hopes the fulfillment of the demands will create a campus where her Asian identity will be acknowledged.

“Maybe at the end of this, I can feel comfortable calling myself Asian again.”

Diane Fujino, a professor of Asian American studies, also spoke at the rally, urging students to “mobilize and organize” to create the changes needed for the community.

Fujino said that not only do the 2019 demands build upon the Asian and Asian-American community demands in 2017 and the Black Student Union demands from 2013 and 2018, but also the work that Asian students put into creating the ethnic studies departments at universities across California. 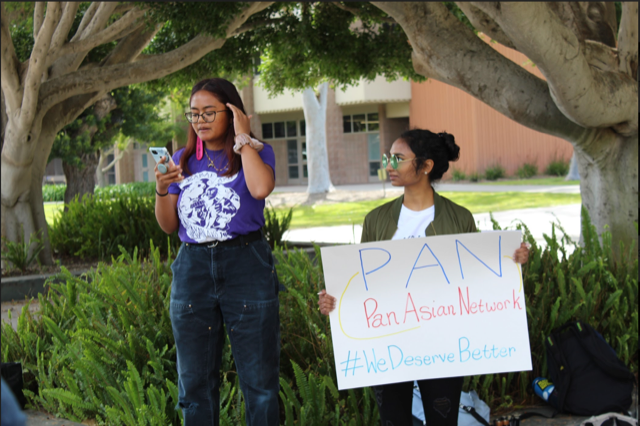 After the rally, participants marched into Cheadle Hall and chanted in protest while ascending the stairs to the fifth floor, where Vice Chancellor Margaret Klawunn and Executive Assistant in the Office of the Chancellor Diane O’Brien received the list of demands.

Pan Asian Network members then listed the staff they required to be present at the meeting and requested that a meeting to discuss the demands with the Chancellor Henry T. Yang be held on Friday, May 3.

Klawunn said the demands and the request for the meeting would be passed on to Chancellor Yang.

If the meeting date is not fulfilled, Pan Asian Network and other groups plan to take stronger action to compel the university to meet their demands, according to Donna Anderson, member of APIGSA.

“If that doesn’t happen, if Chancellor Yang is unable to make that possible, then it turns into direct action. It’s gonna be more rallies, more advocacy, greater activism on campus and we won’t be silent. We’re not gonna let this go,” Anderson said.

For Anderson, the demands come down to an essential problem with how the Asian and Asian-American communities are seen on campus.

“We are invisible. Our needs aren’t being met and people just assume that we’re gonna be okay because it is a reinforcement of the model minority idea that Asian and Asian-American students are gonna make do. But that’s not the case,” Anderson said.

Correction [8:10 p.m.]: Fujino’s name was misspelled in a previous version of this article.