I don’t know when I first realized I had academic anxiety. I remember in middle school breezing through Algebra I and geometry while most others had trouble. After every test was handed back in math, the first reaction from my friend would be, “What’d you make? I bet you got a 100.” The teacher would hand me the test back, my face would turn beat red and my heart would feel like it was about to explode out of my chest. Was it because I was afraid of personal disappointment, or was it because I was wary of not living up to my friend’s expectations? It was both.

Academic anxiety is defined as “an apprehensive uneasiness or nervousness, usually over an impending or anticipated ill,” particularly feeling distressed over academic tasks and school pressure. Coping with academic anxiety is a struggle that I’ve dealt with my whole life. It’s something I didn’t see the direct effects of when I was younger, but it gradually built up over time. At a young age, I was placed into the category of “academic talent.” My defining personality trait was decided for me before I could figure it out for myself: she’s the “smart one.” I remember being placed into the gifted student program in elementary school and being confused at what exactly it meant to be academically gifted. It didn’t help that my parents are engineers and that I’m half Indian — two facets which people attributed to my academic success as genetic. 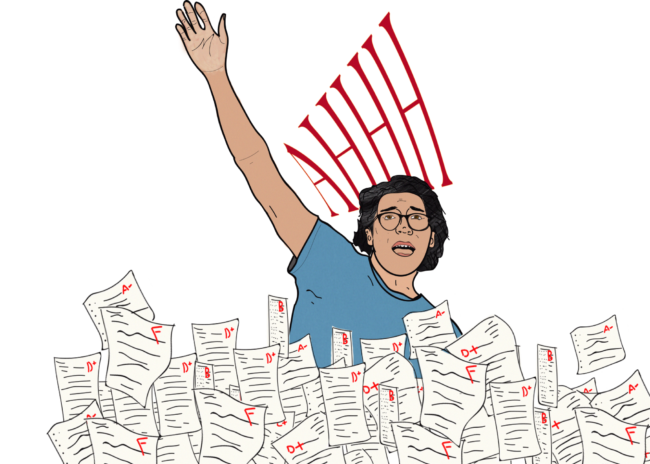 Academic anxiety is not something I’ve ever talked about with anyone or an aspect that anyone in my life has really noticed. It’s not the fault of the people in my life, but rather the tendency of keeping it hidden from the outside world.

Discussing tests or assignments with my friends was never something I felt like I could be fully included in. Whenever I would express nervousness or get back a grade that was not up to my standards my friends would laughingly tell me, “Oh shut up, you ace everything.” This aspect of “acing everything” wasn’t something that was an accomplishment for me anymore; it was expected from my friends.

I’ve tried to figure out what this anxiety boiling inside me stems from for a long time because my parents never pushed me toward perfection. They just wanted me to do my best. I’ve realized my anxiety originates from the notion that I want to emulate the success of people in my life, namely my parents, but also live up to this “smart” personality trait that has defined me.

I recognized that I can’t live up to this defining trait. We live in an increasingly bright generation of students who have pushed the boundaries of success toward something unattainable for most of us. It’s no longer ok to be “average.” Colleges, employers, our parents: They are all looking for some nuance of greatness in each one of us, which I was led to believe would be my exemplary academic success.

In high school, my extended family told me they had no doubt my grades alone would get me into any college I desired, something they didn’t realize many students had going for them. I live in a pool of intelligent students, a pond of intelligence which has grown quickly over time in which I discovered I am a very small fish. And I’m ok with that. It’s not the aspect of competition that is the root of my anxiety, but rather my attainment of individual success. I cried once in high school when I got a B on a test because I was so disappointed in myself. Yes, an actual B. I realized how stupid it was later that I cried over a B, but the anxiety associated with earning a B didn’t go away, just the initial extreme reaction.

The stress associated with obtaining good grades in a college quarter system is exponential.

Suicide rates at colleges — especially Ivy League campuses from increasing academic pressure and schoolwork-related stress — indicates the pervasiveness of academic anxiety. These kids are portrayed as students who never left their dorm room or couldn’t cope with the pressure of going to such a competitive school.

Personally, I feel academically challenged at UCSB, but the pressure of going to an Ivy League would be insurmountable for me. Being surrounded by geniuses and trying to define success for myself in that environment would cause me to reach a mental breaking point. I’ve heard stories about some Ivy League schools where if a student leaves their notes on a desk unattended, other students will trash them in an attempt to eliminate some competition.

But it’s not just Ivy League schools. I’ve seen my friends’ Snapchat stories where they’re stressed and staying up until 3 a.m. to finish that 30-page paper and got maybe four hours of sleep before their next class. And that’s when I realized that college isn’t just a struggle for me but an cumbersome fight for all of us.

The stress associated with obtaining good grades in a college quarter system is exponential. A 10-week course with a few major assignments making up the bulk of your grade is not exactly a framework that is conducive for students to succeed. We’re encouraged to take 15-17 units a quarter, which is a lot to juggle with sports, jobs, clubs and maintaining a social life. I didn’t realize the extremity of this until the end of Winter Quarter.

The pride in getting A’s was small compared to the disappointment I would feel if I didn’t.

Winter Quarter was a wake-up call for me. It was rainy, I was taking 17 units and it was the perfect condition for me to slack off. I have never felt as much anxiety as I did when I was sick during finals week. I felt as though I couldn’t breathe every time I finished one of my four finals — not just because my nasal passages were blocked, but also because I did the bare minimum to get by that quarter up until then. The intensity of cramming information into my brain was too much.

And while I did get A’s in my classes Winter Quarter, I didn’t feel satisfied. Why? Because the expectation of succeeding was no longer external, it was something ingrained in me. The pride in getting As was small compared to the disappointment I would feel if I didn’t. I convinced myself if I didn’t get an A in one of my classes, I would be a colossal failure.

So Winter Quarter ended up being a wake-up call for my mental health. I know it isn’t reasonable to place these burdensome expectations on myself, but I still don’t know how to alleviate my academic anxiety; I don’t think any of us do. But I do know one thing: Academic success does not define us as students. We all have learning curves. While one of us may have an aptitude for calculus, someone else may have a knack for literature. We as a generation have a naive but admirable tendency to want to achieve greatness and make something of ourselves no matter the cost. After all, that’s what our parents did.

But however you define success, you should never put it before your mental health. The anxiety caused by the desire to succeed is probably not going to be absent in our kids and future generations, but we should convince them that it’s more important to prioritize mental health than the anxiety of the burdens we’re facing. It’s not something we can just convince ourselves of, but something we have to instill in each other.

Joshen Mantai wants you to prioritize your mental health and talk about your anxiety with someone else.