The Daily Nexus
Student Gov
Matthew Griffin for External Vice President for Local Affairs
April 18, 2019 at 12:04 am by Daily Nexus Editorial Board

Griffin, who is running with Campus United, has an ambitious platform – creating a community court in Isla Vista, holding more Green Dot trainings, expanding the food bank program to I.V. and starting a community compost system – but one we believe he is more equipped to handle than his opponent, Christian Ornelas, third-year environmental science major. 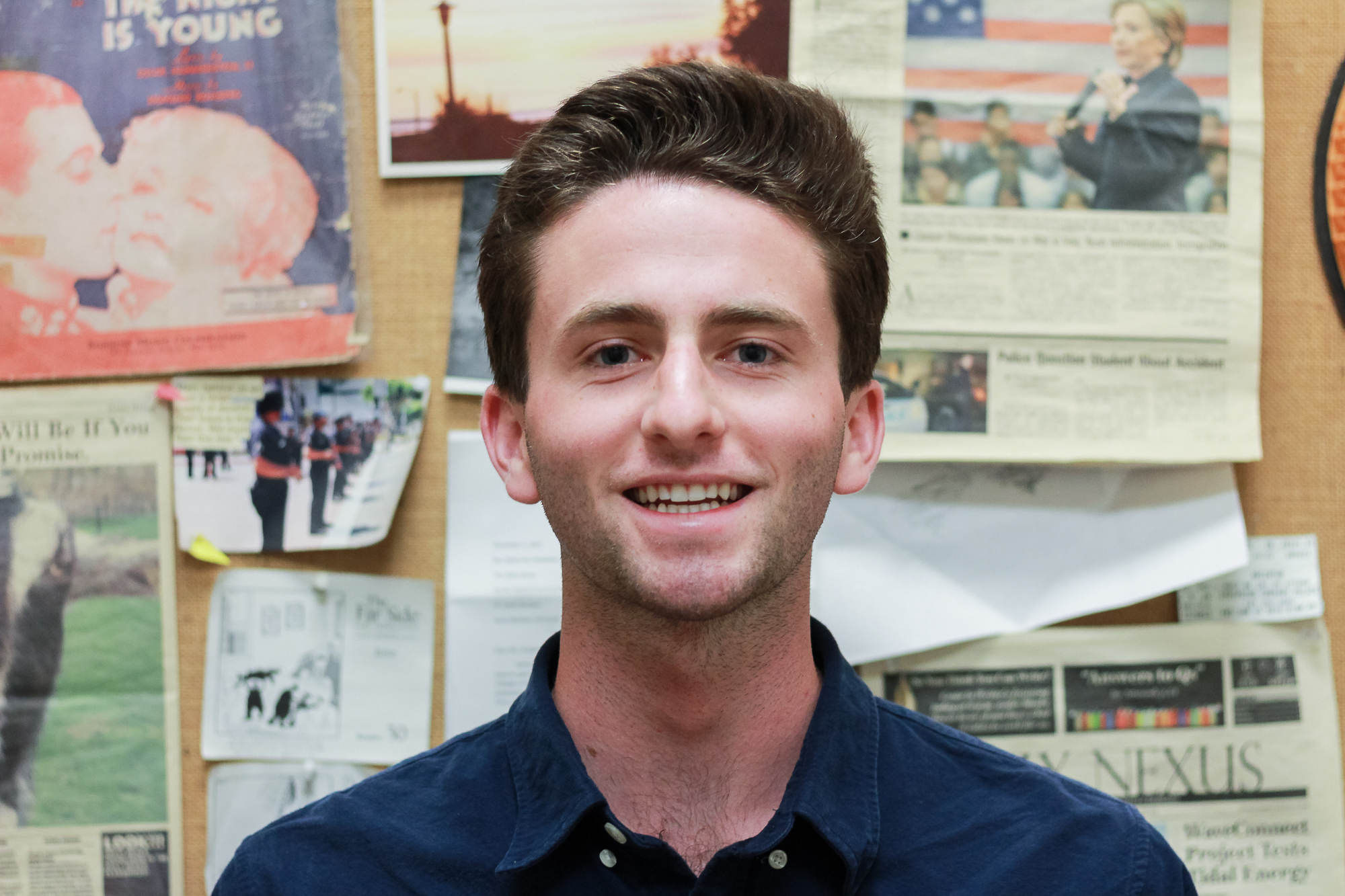 But that is not to say that Griffin’s endorsement is a complete stamp of approval: both candidates had significant advantages and weaknesses that the Nexus took into consideration.

Ultimately, Griffin received the Nexus’ endorsement because of the work he has done, the familiarity he has with local government bodies and officials as well as his platform, which had more concrete ideas that could go a long way for the community if implemented.

Griffin runs for this position after having worked in the Executive Vice President of Local Affairs (EVPLA) office since his freshman year, when he applied for the fellowship program within the office. That year, Griffin worked with then EVPLA Ashcon Minoiefar to find homes for students who were displaced due to a balcony collapse in a home on Del Playa Drive.

That same year, Griffin also served as the treasurer for Hall Council in Santa Cruz Hall. Griffin noted in his interview with the Nexus that Santa Cruz Hall was the only residence hall that year to not ask for additional funds from Residential Housing Association at the end of the year. He cited this as evidence of his fiscal responsibility, which he said he would apply to the EVPLA position.

“I think that it’s important that people who are in those positions are responsible with student fees. And that’s an example of me being responsible as student fees,” Griffin said.

The following year, Griffin served as the I.V. liaison for the office and began working with different groups in I.V. and familiarizing himself with the arena of local politics.

This year, Griffin studied abroad in Fall Quarter. When he came back to UCSB, he did not serve in an Associated Students role on campus, but was involved with the Beloved Community Conference Committee and served as president of the UC Santa Barbara chapter of The One Campaign, an international organization taking action against poverty and preventable disease.

Now, for his senior year, Griffin believes it is the right time for him to step into the position.

“I thought that I would come back [from studying abroad] and do what I’ve always wanted to do and be the EVPLA,” Griffin said. “Or at least give myself the chance to run and share my story with students and share why I think I would be the best candidate to represent students.”

As for his platform, Griffin has already made efforts to ensure the feasibility and completion of some of his projects.

Griffin discussed the possibility of a community court in I.V. with local representatives Joan Hartmann and District Attorney Joyce Dudley, who he said were in favor of implementing the plan in the next year. The court would allow I.V. residents to attend hearings for minor infractions, such as underage drinking and parking violations, at a location in I.V. rather than at the courthouse in downtown Santa Barbara.

Given the circumstances of many students in I.V., such as busy schedules and a lack of transportation, the option to attend hearings locally would lift a weight off students’ shoulders.

“Most [students] don’t have cars and yes, there is a bus that goes down there, but most of these court dates are Friday at 8:00 a.m. and sometimes the buses are too full or sometimes [students] can’t get to the bus on time,” Griffin said.

Griffin is also aiming for a project that has long been an unfulfilled aspect of previous EVPLA platforms: free wifi in parks and beaches in I.V. Although the project has failed to gain footing in the past, Griffin believes completing the project is just a matter of “laying the groundwork.”

“That’s a project that can’t be completed in nine months. It can be started in nine months, but then there’s lack of continuity in that transition. So I think that now, given the fact that we have structured government in Isla Vista… pushing for it and continuing to lay the groundwork for [the parks] can have it go throughout the next few years,” Griffin said.

To address food insecurity, Griffin wants to create a food bank in I.V. by collaborating with local grocery stores to give away the food those stores don’t sell. Griffin said after meeting with someone from the I.V. Food Co-op, he believes stores would be willing to donate food that is close to expiring so that students can access it for free at a designated location in I.V.

Despite his thorough platform ideas, which the Nexus believes will benefit students if they are seen through, Griffin still seems to be slightly out of touch with student issues.

If elected, Griffin must ensure that groups which he cannot speak for are able and encouraged to speak and express their own concerns, grievances and hopes for the community.

“I cannot speak on behalf of all communities and identities in Isla Vista and UCSB’s campus, but I really like marketing Associated Students and I think that if the EVPLA Office and A.S. as a whole can work to market our services and market what we do as an entity, I think that that gives a little bit more outreach to those communities,” Griffin said.

It is possible for Griffin to amplify these voices in his office, but it will be up to him to provide that opportunity.

Griffin also failed to adequately address sexual assault, violence and harassment in his platform and interview. As something that has consistent advocacy from student organizations, UCSB’s Campus Advocacy, Resources & Education Center and I.V.’s local governments, sexual violence in I.V. and at UCSB is an issue that needs to be on the EVPLA’s radar.

When discussing police presence in I.V., another contested issue in the community, Griffin again seemed to lack the perspective that some students hold about feeling unsafe with police. Griffin said he wants to “bridge the gap” between students and police, namely by holding public forums to foster discussions between the two and “really working to give more of a backstory of the police officers.”

The Nexus had concerns that Griffin somewhat overlooked the serious worries of students who do not feel safe around police officers. Griffin offered some ideas to address the issue, but seemed to think that issue could be solved if students “understand who [police officers] are in general.”

Finally, in comparison with Ornelas, Griffin lacked the same charisma and confidence that his opponent displayed. Student leaders –– all leaders –– need to be able to inspire hope, assurance and trust in their constituents. Neither EVPLA candidates completely achieved this, but Ornelas’ personable character is an advantage he has over Griffin.

If elected, Griffin will need to keep these concerns at the forefront of his agenda as EVPLA and if he does, there is potential for a successful EVPLA term.

Again, neither candidate perfectly embodies the ideal candidate for this position. Although Ornelas might be more personable with constituents, his platform projects fell short of Griffin’s, and lacked concrete plans for execution.

Ornelas listed some of his proposals for his term as creating a monthly farmer’s market in I.V. and special topic classes co-taught by professors and students. These ideas are not bad, but they’re not the most pressing needs of students at the moment.

Ornelas seemed to have a better sense of student opinions’ on issues like police presence and sexual violence, but had little understanding of government agencies in I.V.

The Nexus believes Griffin will use his position as EVPLA to fulfill his platform and serve students to his best ability. Griffin is knowledgeable about the EVPLA office, familiar with I.V. terrain and has ideas that could really make a difference in students’ everyday lives.