The Daily Nexus
Opinion
Is Studying Abroad All Sunshine and Rainbows?
April 18, 2019 at 3:43 pm by Autumn Murphy

“It’s the best time of your life!”

Those words have not only been said by people who went abroad, but also by people who decided to take the safe route of always having the buzz and thrill of I.V. right at their fingertips. Having those two options of staying at home or studying abroad at your disposal can be a dangerous battleground for your decision-making and mental health. Both options are sufficient, but at what cost? 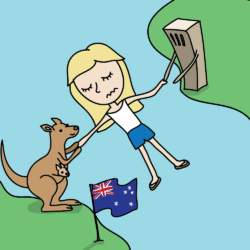 While experiencing my first Deltopia, I had the gut-wrenching realization that I did not want to leave UCSB for another country right as the day was over and the streets were emptying out. I was just settling into this environment and was finally starting to make friends, but it would all be for nothing if I gave all that up and moved to Melbourne for a semester. I could trade daygers for nights at a classy bar, but there is only so little time I have to be young in I.V. before I graduate and become a “real adult.” Bars and good people are everywhere but staying in I.V. isn’t forever. Someday I will have to move to a big city to eventually find a job or two that can keep me alive, but not just yet.

People who’ve come back from studying abroad say it was the greatest experience of their lives, but most people who go abroad have the rest of their college careers to make up for lost time, while I’ll be missing an entire Fall Quarter and summer of my second and last year here due to being a transfer student. Spring Quarter is already here and before I know it I’ll be graduating with at least a few regrets on my mind.

I had some of my earliest thoughts about wanting to travel while sitting on the carpet of my grandparents’ house looking at souvenirs from places all around the world, from South Africa to China and from Italy to Ireland. I would look at postcards of the Coliseum in Rome and dream of going there and exploring the city. I eventually made my way there on a June evening in 2014. The sunset looked exactly how it did on the postcard, and I felt better than I expected to feel because I reached a goal of mine that I never thought I would complete. Whenever I used to think of foreign countries, I would imagine them being completely different than what I’m used to here in America, but walking past the parks in Rome reminded me of sitting under the shaded trees on a hot day in Sacramento as a child, and for a second I was able to comprehend what it was like to feel like I had two homes at once.

The fear of being lonely abroad still scares me, and it comes from a place of being lonely at UCSB myself. My entire Winter Quarter was one disappointment after the other, and it culminated in me applying to study abroad in order to mitigate those fears of being friendless for another year. What I thought was an escape route from my fears ended up opening more than a few other cans of worms. Proactive homesickness was already starting to take effect for me and almost pushed me to withdraw from my program. I stuck through, however, and listened to the stories of people who came back, knowing that regret is stronger for those who don’t do what they yearn to do.

What’s also holding me back right now is the cost, and I probably made the worst decision in choosing one of the most expensive cities in the world — Melbourne, Australia — all in the name of being comfortable with speaking my native language and an easy academic and cultural adjustment. What would I have had to gain if I just went to another place so similar to my home country? Would I waste thousands of dollars doing the same tasks like studying and partying in a place that I could always go back to?

I don’t trust myself to keep my word and move abroad by myself on my own terms right after graduation because of how indecisive I am, so why not do it now when people are encouraging me to go? When I go abroad, I’ll still have the comforts of UCSB to look forward to when I come back for Winter Quarter, as well as the support of the EAP program and advisors.

So I’m going abroad to Australia this fall, even if it scares me. I promised myself I would go to another country during college, and this is probably my only chance to take that step. Traveling is scary, but staying in your comfort zone and settling while you’re young is even scarier.

Autumn Murphy likes to worry about her future and eat jalapeño ranch chips in her free time.

Moving abroad for a quarter/semester will also help you grapple with your identity because you’re so much more removed from your support net, and do you know who you are without it?

Also student housing over homestay if you want have the least amount of isolation and a bit of comfort from home with UC or American students.