The Daily Nexus
Student Gov
Alexandra Leal Silva for External Vice President for Statewide Affairs
April 18, 2019 at 12:04 am by Daily Nexus Editorial Board

Isla Vista Party candidate Alexandra Leal Silva and Campus United candidate Daevionne Beasley are both confident, charismatic and genuine leaders. Both candidates have the ability to rally students behind them and both seem to sincerely care about the well-being of UC Santa Barbara students. 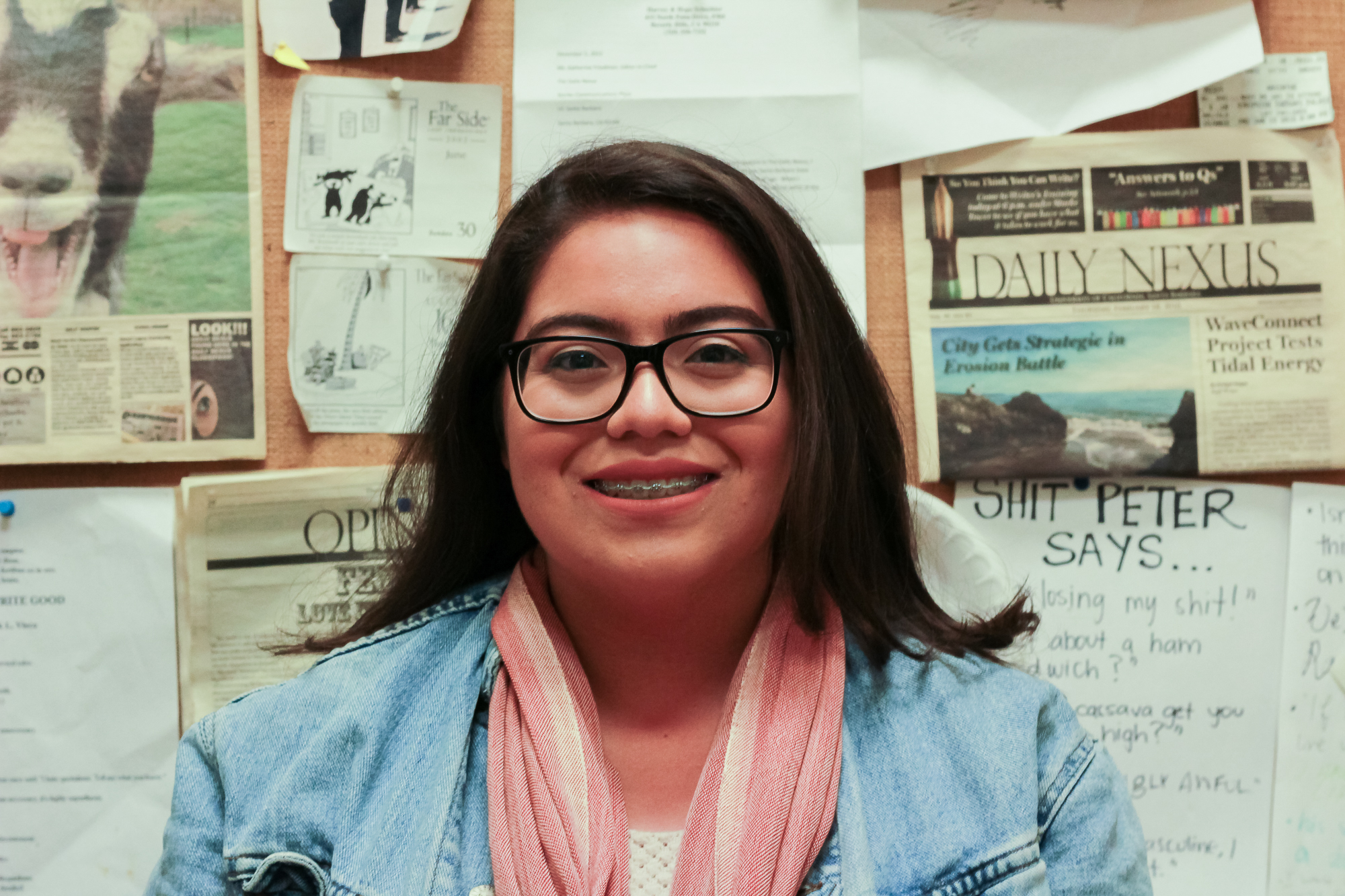 However, when speaking in terms of qualifications, and who is most ready to serve as External Vice President for Statewide Affairs (EVPSA), the answer becomes clear: the Nexus endorses Alexandra Leal Silva for the position of EVPSA.

Leal Silva, a third-year history of public policy major, has been working in the EVPSA office for the past three years. She started off as a fellow her first year, went on to work as the community organizing director and is currently the legislative director in the office.

She knows the EVPSA office inside out — she knows how to get things done and exactly who to work with to make things happen.

Leal Silva has spent the last three years working behind the scenes, and it’s time for her to be in the spotlight.

“I think the EVPSA is a very unique position in which it’s not something that you can just come into and know what you’re doing,” Leal Silva said. “There are so many institutions that you’re navigating, so many relationships that have to be formed. Frankly, they get the work done and I think I’ve really put in the groundwork to allow myself to do that work.”

“I know what a successful office looks like versus one that needs more work. I have worked in every single office that has existed on this campus for the past three years.”

Leal Silva has ample experience working with Associated Students (A.S.) Lobby Corps; this past year, she has been working on Senate Bill 24, a bill which would ensure abortion by medication access on college campuses.

Last year, Leal Silva helped create Coffee and Calls, which provided students with the opportunity to call their senators about certain legislation while having a free cup of coffee in the Arbor.

The Nexus asked Leal Silva why she decided to stay working behind the scenes for so long, and her answer further confirmed that she is now ready to take on the position.

Leal Silva made it clear that she will not be affected by any of the drama or toxicity that comes with party politics in A.S.

“The EVPSA office is such a unique space. It’s one space that, personally, I’ve never seen become enthralled with the drama that sometimes can enthrall A.S.,” she said. “It’s not the sense of superiority or like ‘we’re above it,’ but it’s this sense of knowing… we’re working for something so big, we’re working for ideas that seem so unattainable.”

“There isn’t time to get caught up in all of it.”

For the first two years of Leal Silva working in the EVPSA office, the office was “CU-controlled.”

“For me, it comes down to: Are you down to do the work?” Leal Silva said.

If elected, Leal Silva hopes to focus on expanding financial aid and focus specifically on advocating for the Middle Class Scholarship.

“We need to talk about how Girvetz is in shambles, but we have brand new bioengineering buildings,” Leal Silva said. “Our students should feel like they all have access to this equal level of education and that they’re not being left behind because of their major.”

Leal Silva’s maturity and sense of responsibility are two qualities necessary for the EVPSA position, but more than anything, Leal Silva sold the Nexus on her pure passion for the work she does and the goals she has for UCSB if elected into the position.

“I want UCSB to be a leader of force when it comes to these issues. I want them to think of our campus as an indispensable area of innovation and of creativity and community. I think that we already have it and I think we can do more of it, and I would love to help lead us to that next step.”

Leal Silva also referenced the Finance and Business Committee budget reports that On-Campus Senator Zion Solomon has been creating, stating she wants to take similar steps in order to be transparent with the amount of money spent on lobbying trips.

“I’m very aware that the EVPSA has one of the biggest budgets in A.S. because they do work that needs, frankly, more money,” Leal Silva said. “But being intentional and being like ‘just so you know, this is what we’re doing with the [money]’… can really, I think, strengthen that bond of trust between the student body and the office.”

“That’s what allyship is… It’s using your privilege to say, ‘I’m going to step aside and give you my stage for however long you need it to get your point across.’”

Leal Silva also showed that she knows exactly who to work with within A.S. for the projects she wants to take on.

She talked about funding to address food insecurity in I.V., and said she would work with the Executive Vice President for Local Affairs and the A.S. Food Bank. She discussed addressing the holes in Title IX policy, and said she would work with C.A.R.E. and Take Back the Night. Leal Silva also mentioned working with the Human Rights Board to advocate for gun violence legislation.

Leal Silva is also knowledgeable about UCSB’s role in the United States Students Association (USSA) and the University of California Student Association (UCSA).

“UCSB pays the most dues to the UCSA, which means that when we’re talking about issues, they need to listen to our campus because we’re paying the most money.”

This past year, Leal Silva has been serving on the Government Relations Committee of UCSA, which includes the legislative directors of other UCs; Leal Silva has effectively built connections with other UC EVPSA offices already.

“I’ve learned a lot from listening to how Berkeley runs their office, to San Diego, to Santa Cruz, and they all have such critical ways of approaching these issues,” Leal Silva said. “I almost don’t want to compare them because I don’t want the space to feel like a race or like a competition.

“It very much so should exist as a collaborative space where you’re learning from each other.”

Leal Silva also seems committed to doing whatever it takes to help marginalized students on campus and added that she wants to continue to advocate for UCSA’s Undocumented Student’s Lobby Day.

“That’s what allyship is… It’s using your privilege to say, ‘I’m going to step aside and give you my stage for however long you need it to get your point across.’”

Leal Silva also believes that it wouldn’t be her constituents’ jobs to come to her, but instead, it would be her job to go to them.

“Go to a C.A.P.S. psychologist [and ask] ‘What services would help you do your job better?’ It’s all very worth it if you want to understand where students are at.”

The Nexus does believe that Beasley is a capable leader. He is the director of internal affairs for the Coalition for a Better UC (CBUC), and he spoke to the work he has done on one of the CBUC’s goals to expand the Cal Grant.

Beasley has refreshing ideas. He wants to help stop the UC from doing business with corporations that profit off of prison labor and support formerly incarcerated young adults who apply to UCSB, along with his more common platform point of decreasing the burden of tuition for UC students.

When asked why he decided to run this year, Beasley said, “I figured it was, you know, prime time because I’ll be going into my third year. I don’t want to do it while I’d be studying abroad my senior year.”

“I figured if I were to run this quarter, then my term would start while we were still doing the hearings for the bill, so I’d be able to use the resources from the office to be able to try to push this bill and push student issues as a whole.”

While the Nexus admires Beasley’s work on the Summer Cal Grant bill, we are concerned that this one bill will end up being his primary focus.

“I know that he has done a lot of work regarding Cal Grants and financial aid,” Leal Silva said when asked about her opponent.

“There is a lot to be considered and it can’t be just that.”

Leal Silva said that Beasley is “an example of what student leadership is and of what boots-on-the-ground work is,” and she wants to continue to collaborate with Beasley.

Leal Silva has the broad knowledge of issues that are required of the EVPSA to know about, and we do not believe that Beasley has the insight or experience that Leal Silva has.

When Leal Silva was a first year at UCSB, she applied to a lobbying trip and did not get in. Leal Silva spoke to how disappointed she felt, and she mentioned how the legislative director in the EVPSA office at the time told her that she had to make herself “indispensable” on this campus.

Leal Silva has done just that — she has become indispensable on this campus.

“We have so much potential,” Leal Silva said toward the end of her interview. “If chosen to serve, I would give it everything I had and more.”

Alex is a queen and I love her. That’s my EVPSA!!!

Daevionne was slated by CU because of popularity, as most CU candidates are. IVP candidates are actually going to make tangible change and you won’t hear them disappear into the shadows if they win. Just my honest opinion

This comment completely invalidates the work Daevionne’s been doing since his arrival to UCSB. Do Better.