The Daily Nexus
Sports
Gauchos Drop to Fourth Seed in Big West After Falling to UC Irvine
April 16, 2019 at 6:10 pm by Richard Benites 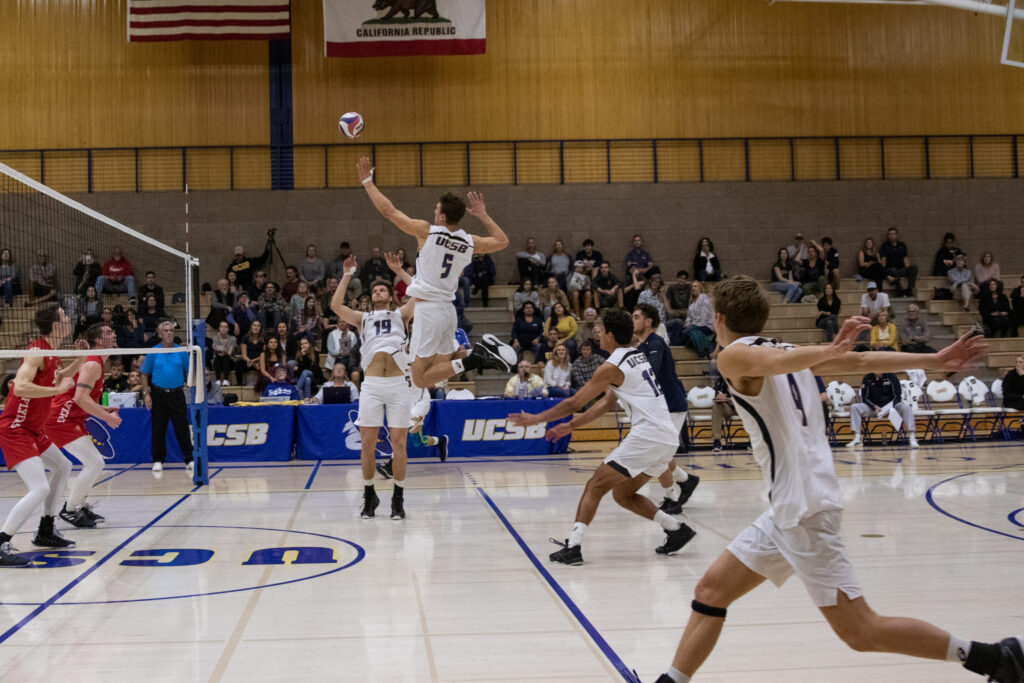 It’s been a week of volleyball that the Gauchos would like to forget and to forget quickly, as there are bigger fish to fry with the Big West Volleyball Championship up next.

All the action started last Friday night when UCSB visited UCI for the first of two encounters. The first set of the night started off fairly close, and it seemed momentum kept jumping back and forth between possessions. A quarter of the way through, a kill by UCI’s Aaron Koubi brought his side the first significant lead of the match, with a 9-5 score favoring the Anteaters. Following this point, the Gauchos seemed to flip the script and fought back. Eventually, off a kill by Gaucho outside hitter Ryan Wilcox, UCSB tied the point tally at 15-apiece. For the remainder of the set, it was truly neck and neck, with no side gaining a lead greater than three points. Although it seemed likely that the Gauchos would take this set late, the hosts prevailed by a final score of 29-27.

Dropping that last set must have been quite demoralizing for the Gauchos, because the following set proved to be the team’s worst of the whole series versus Irvine. With the Gauchos not being able to find their defensive bearings in this one, the set would favor the home side once more, resulting in a 25-12 final score.

The third and final set of the night saw a bit more energy from the Gauchos, as the good guys kept it close and competitive once more. However, the Anteaters were stingy with their lead in this one and managed a hard-fought 25-22 victory, and the first night went to UCI with a final set score of 3-0.

On Saturday night, it was UCI’s turn to travel, as UCSB hosted its last regular season match. The Gauchos were likely seeking redemption but couldn’t find it in the first set. Although closely matched in the beginning, it was around when the point tally reached 13-8, off a kill by UCI’s Karl Apfelbach, that the visitors began to run away with this one. Although a service ace from Gaucho outside hitter Corey Chavers brought the tally back within five at 21-16, the Anteaters went on to secure the first set of night two with a final score of 25-17 [[ok]].

The major bright spot of the series for the Gauchos came in this second set as UCSB fought hard to earn and maintain its lead. The Anteaters didn’t make this an easy task; however, UCSB’s fight paid off as the home side was victorious by a 25-22 tally.

In the third set, it appeared the Gauchos were in a good position to snag back-to-back sets. Still, the hosts were in catch-up mode for the majority of it. A service error on UCI’s behalf did, however, bring it back within one at 19-18. Nevertheless, the Gauchos couldn’t muster up a comeback in time and dropped the third set by a 25-21 result.

The fourth and final set arguably wrapped the series up on a high note, as a total of 66 points were tallied by its end. It was truly the epitome of back and forth, neck and neck, in this one, with the lead never surpassing more than two points. Ultimately, the Anteaters took this one, too, by a final score of 34-32 — meaning the final set score also went to the visitors, at 3-1.

This regular season finale was also the senior night for Corey Chavers, Connor Drake and Hayden Boehle, who were all recognized in their last home game at Robertson Gymnasium.

Up next for the Gauchos is the Big West Volleyball Championship. Although these past two defeats dropped UCSB down a spot in the seeding, the Gauchos will be facing a CSUN side whom they’ve bested twice by set scores of 3-0 and 3-2, back in late March.