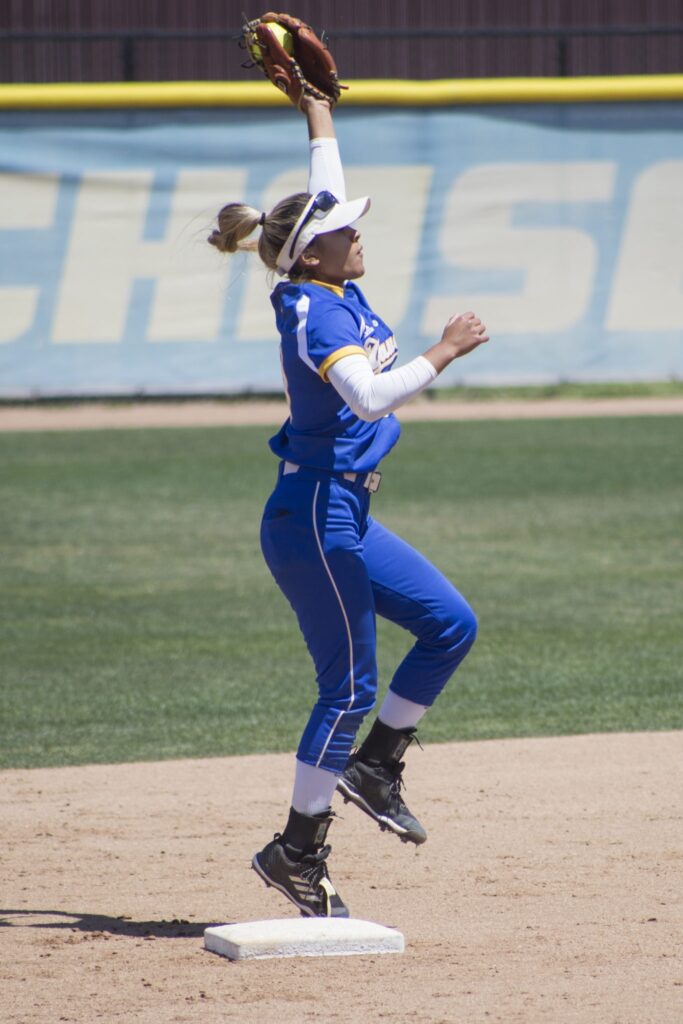 Melanie Menor catches the ball before the LBSU hitter gets a chance to get to second base. Nicole Wallace/Daily Nexus

The UCSB softball team suffered a sweep at the hands of the first-place Hawai’i Rainbow Wahine last weekend, dropping their record to 1-8 in the Big West and 7-33 overall for the season.

The Gauchos hit the road for the first time in Big West play when they played Hawai’i in Honolulu for a three-game set that included one game on Friday and a doubleheader on Saturday.

Hawai’i was riding a four-game winning streak heading into the series and Santa Barbara had recently snapped their 13-game losing streak with a win against UC Davis, so both teams had experienced some recent success that they would try to build on during this weekend’s matchup.

Friday’s game was a tight one that the Gauchos lead for a significant portion thanks to a third inning single from Sammy Fabian that scored Kayla Krantz and gave UCSB a 1-0 lead. Fabian was 1-3 on the day and one of six Gauchos that recorded a base hit. UCSB carried their 1-0 lead into the fifth inning, where they managed to get runners on second and third with no outs but failed to score and extend their lead. The potent Hawai’i offense was then able to make the Gauchos pay for failing to take advantage of the opportunity by putting up four runs in the bottom half of the inning. The bulk of the damage was done by the Big West’s homerun leader Callee Heen, whose twelfth big fly of the season put the Rainbow Wahine up 4-1. This proved to be too big a hole for the Gauchos to climb out of.

Both games in the next day’s doubleheader followed similar patterns of Hawai’i grabbing an early lead and never relinquishing it, as the Rainbow Wahine took both Saturday games by scores of 3-1 and 5-2.

The first game of the day saw Hawai’i take a 3-0 lead through the third inning before allowing their pitching staff to do the heavy lifting down the stretch by only allowing one run from UCSB’s hitters. The one run scored by the Gauchos came on a sixth inning single by Devan Sperry that scored Maci Fines, who had two hits in the game. As the Gauchos loaded the bases in the top of the seventh, Santa Barbara did make Hawai’i sweat it out down the stretch — only for Sammy Fabian to fly out with the game-tying run in scoring position.

In the third game of the series and the second game of the day, the Rainbow Wahine carried over their momentum from their earlier win as they scored four runs in the first inning off of three singles and a bases-loaded walk. Hawai’i would hold their lead for the rest of the game behind a strong outing from pitcher Izzy Dino who only allowed four hits and two runs en route to a complete game, improving her individual record to 9-5. The two runs for the Gauchos both came in the seventh inning after things had more or less been decided, with an RBI single from Rayna Cohen who later scored on a fielding error by Hawai’i. Sammy Fabian led Santa Barbara on offense as she had two of the Gauchos four hits on the game.

At 1-8, the Gauchos find themselves sitting in last place in the Big West Conference at this point in the season and with an upcoming series against 4-5 Long Beach State, they will look to improve that record against another squad that has yet to find its way so far in conference play.

The Gauchos will play their next game on Friday, April 19 in Long Beach as part of a doubleheader before playing in the series finale on the following Saturday.