The Daily Nexus
Music
TroyBoi and JPEGMAFIA Shake the Thunderdome
April 11, 2019 at 5:41 pm by Kristina Valencia

As another Spring Quarter unfolds here at UCSB, students are once again presented with the excitement of Deltopia and the annual The Warm Up concert presented by A.S. Program Board. This year, The Warm Up featured electronic music artist TroyBoi and special guest JPEGMAFIA for their sold-out, Gauchos-only event in the Thunderdome.

Kicking off the show was rapper and producer Barrington DeVaughn Hendricks, also known as JPEGMAFIA (all caps, no spaces) or Peggy. JPEGMAFIA has grown from a small artist in the Baltimore D.I.Y. scene to a well-known musician working and touring all over the country with big-hitters like Vince Staples and Flume. Last year, JPEGMAFIA released his album Veteran, which received rounds of praise and acclaim from popular music sites like Stereogum, Pitchfork and The Fader.

During JPEG’s performance, Gauchos were presented with an exciting showcase of abrasive rap, an exciting lightshow and the stage antics of Peggy himself. Occasionally yelling along to the lyrics of his own songs, as seen in his performance of the song “Real Nega,” students in the crowd were easily able to engage themselves completely into the captivating performance. As JPEGMAFIA spat his lines, purple, blue and white lights waved around frantically in an amalgam of exciting visuals for students to enjoy. In case you missed JPEGMAFIA at The Warm Up, he will also be performing this year at Coachella. 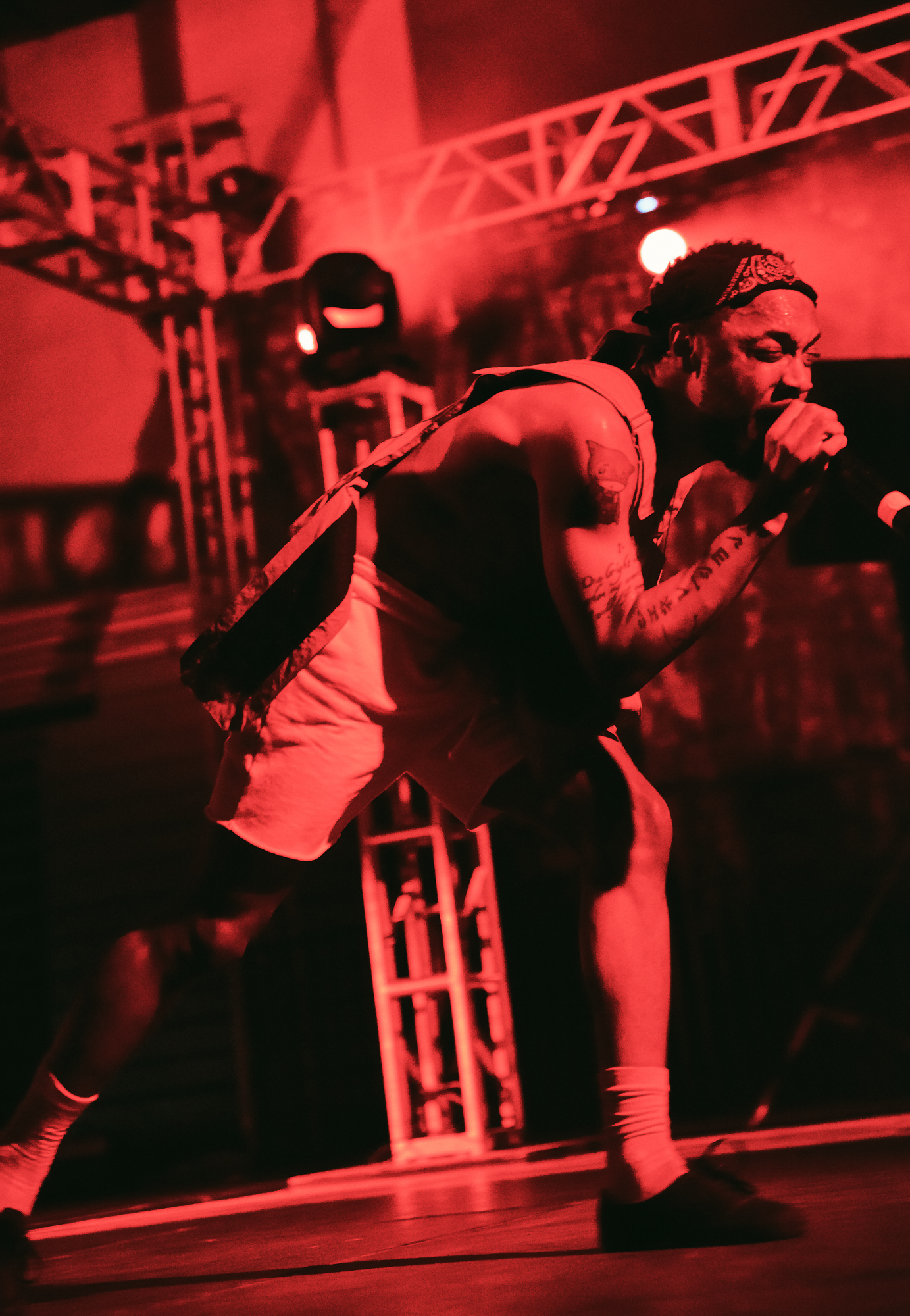 The Warm Up’s headliner was TroyBoi, a British electronic producer. Known for working with popular artists such as ZAYN, Missy Elliott and Danny Brown, TroyBoi has also released his own original tracks and albums, solidifying his role in the music scene as a whole. During his DJ set, Gauchos let loose as the crowd moved together in a symbiotic wave of chaotic dancing while songs new and familiar poured out of the thumping speakers.

Although Troyboi performed original content, he also remixed popular tracks like “Bad and Boujee” by Migos, which clearly struck a chord with concertgoers and enabled them to engage with a revision of a staple Isla Vista party track. Similar to JPEG’s set, the lightshow accompanying Troyboi’s performance worked all the more to enhance the overall atmosphere. Meghan Leon, a third-year biology major, said, “The flashing lights and the loud music together just made the already great performance so much more extreme and fun.” 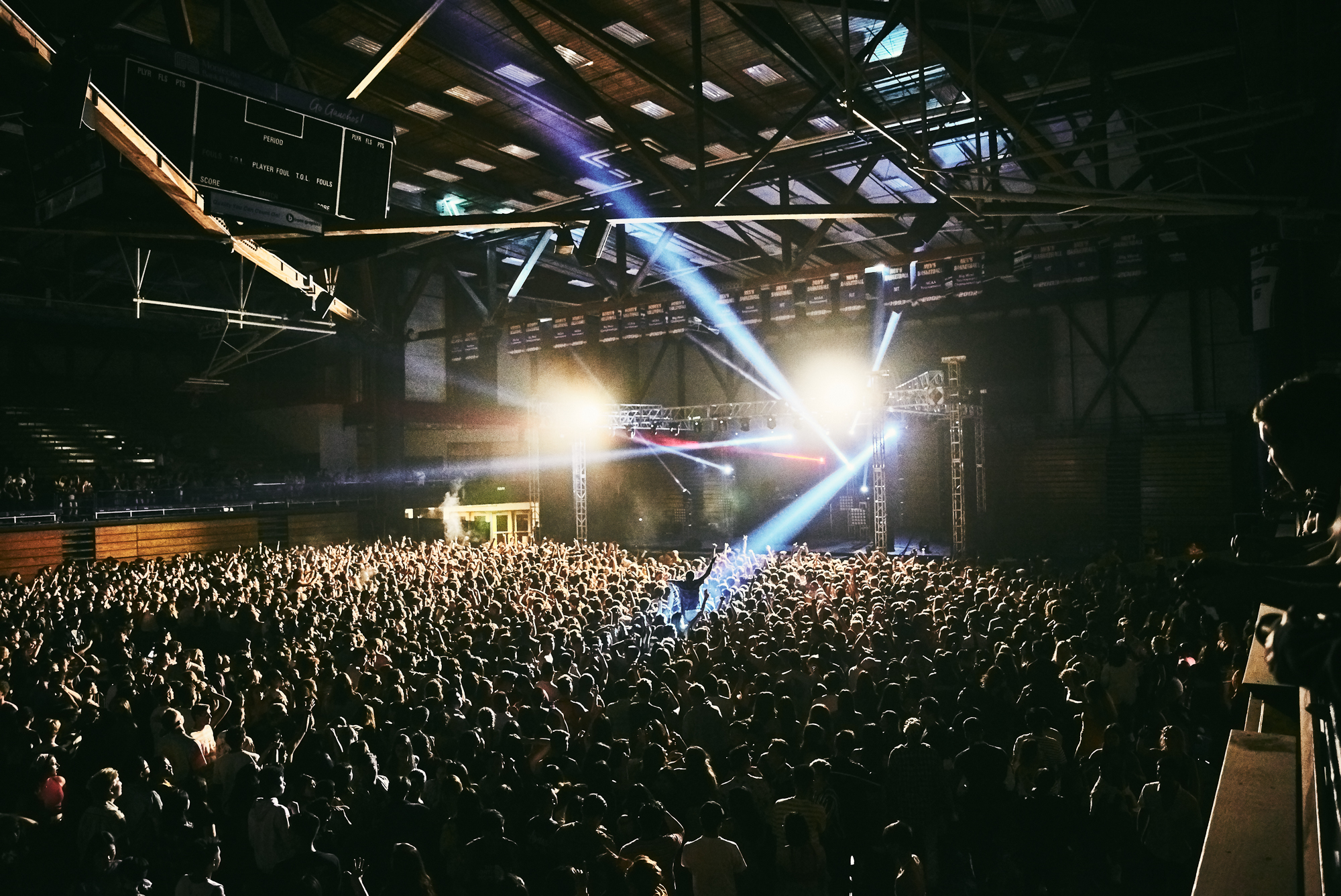 In an interview with A.S. Program Board Special Events Coordinator, Kailah Korsh, a fourth-year sociology major, I asked some questions regarding students’ interest in the booking processes and logistics of shows like The Warm Up.

“This is the fifth year of Delirium and The Warm Up, and we instituted these concerts in order to give students alternative programming that’s not necessarily just going to party in Isla Vista and also to deter out-of-towners coming because it’s a Gauchos-only event,” Korsh explained.

“We chose those dates because there was some trouble like riots and just things going awry in the past,” she recalled, “so the administration thought it would be a really great thing, a super fun event for students to get to do where they don’t have to go out and be in any kind of unsafe environment.”

Because there are a variety of artists to choose from for concerts like this, Korsh explained that the process of choosing one main headlining artist must be fairly discussed and agreed upon amongst all A.S. Program Board members, excluding the commissioner. “All the voting members, after a fair discussion, cast their vote and then the head talent booker or the talent booker for that show then takes that information and goes to the artist’s agent and the process continues from there,” she said.

Once a list of prospective music artists is formed, Korsh explains that they then, “reach out to major agencies that the artists belong to and then get availabilities from the artists and their asking prices, which are usually a general range of prices that they accept in order to do shows. So after that, we talk with the agent and talk about the feasibility of the show happening and then what happens is we send a formal offer.”

In addition to discovering more about Program Board’s booking process, I wanted to know what it’s like getting to work with artists once the plans and contracts are finalized. While Korsh explained that it’s typically fun and exciting to work with famous musicians, she expressed how it can often be stressful due to unforeseen difficulties that arise no matter how well an event may be planned.

“The biggest thing I’ve learned from working directly with such big artists is that they’re just people and things happen that can go wrong,” Korsh said.

When asked about the experience of working with Troyboi and JPEGMAFIA specifically, Korsh said both were extremely excited to perform and more sociable than other artists she has worked with in the past. On working with musicians in general, Korsh elaborated, “Sometimes they’re super sociable, really great to work with, and sometimes they don’t really talk to us and just their manager does. It’s totally their call how involved they are with the students putting on the show, but I’ve had really great experiences my past three years on Program Board working with such big artists.”

Although one might think the chaos of our town’s party holiday might steer an organization away from the idea of planning a complex event like The Warm Up, this is actually a prime reason to have the annual show as a place for music lovers and party goers alike.