Burger King’s recent launch of a completely meatless, plant-based “Impossible Whopper” that it claims to be identical in taste to its traditional beef patty indicates that our sources of protein continue to diversify and meat alternatives are increasingly becoming mainstream.

As the second-largest contributor to human-made greenhouse gas emissions (after fossil fuels) animal agriculture may have a larger environmental impact than many of us realize.

While the human population is expected to reach nearly 10 billion people by 2050, demand for agricultural products is predicted to double in that same time span, the UN reports.

Clearly, our rate of meat and dairy production must change.

That’s where companies like Good Food Institute (GFI) come in.

A non-profit institute that began in 2016, GFI intends to create a “healthy, just and sustainable food system,” according to its 2018 Year in Review report. Taking on a “future perspective,” GFI aims to help pave the way for global implementation of alternatively sourced proteins through promoting, funding research and providing education on plant-based meat and cell-based meat, eggs and dairy.

GFI features numerous departments, including one for entrepreneurship and innovation that helps people looking to start companies in this space by providing a network for them to meet with potential co-founders and get connected with investors. The organization also works to educate large food manufacturers, grocery stores, restaurants and ingredient companies on consumer trends and how to stock these products on their shelves or menus.

“Our mission statement is to harness the power of markets and innovation to transform the current animal agriculture system more toward plant-based and cell-based solutions. That incorporates all different aspects of how we approach this, including from a science and technology perspective. We work to assess the technological landscape and then identify the technical bottlenecks that exist such that we can communicate those to people in academia and industry to bootstrap the early stages of the research and development that needs to happen for these technologies to smoothly progress over time,” Elliot Swartz, an academic research advisor at GFI who recently gave a talk at UCSB, said.

Plant-based meat sources the components of animal meat including proteins, fats, minerals and water directly from plants. Cell-based meat can be produced from animal stem cells. Bacterial or yeast fermentation can create various proteins, such as egg white proteins.

To feed the expected 10 billion people in 2050, we need to close around a 70 percent gap in the amount of caloric content that was produced from around 10 years ago, Swartz stated.

“To feed those people, you need alternate [protein] sources as the current agricultural system leads to many negative consequences in terms of the environment,” he said.

Switching to plant-based and cell-based foods would significantly reduce land and water use and emissions compared to their conventional animal counterparts. In fact, greenhouse gas emissions could be cut in half if the average Western diet went vegetarian, according to a study in the Climatic Change journal.

Advantages of cell-based meat, also sometimes referred to as “clean meat” or “cultured meat,” include no animal death, no fecal contamination that could contribute to water pollution and no antibiotics.

“You don’t need to use antibiotics through the process itself of producing cell-based products,” Swartz said. “That should help with the prevention of antibiotic resistance as well as potentially decrease food-borne illnesses.” 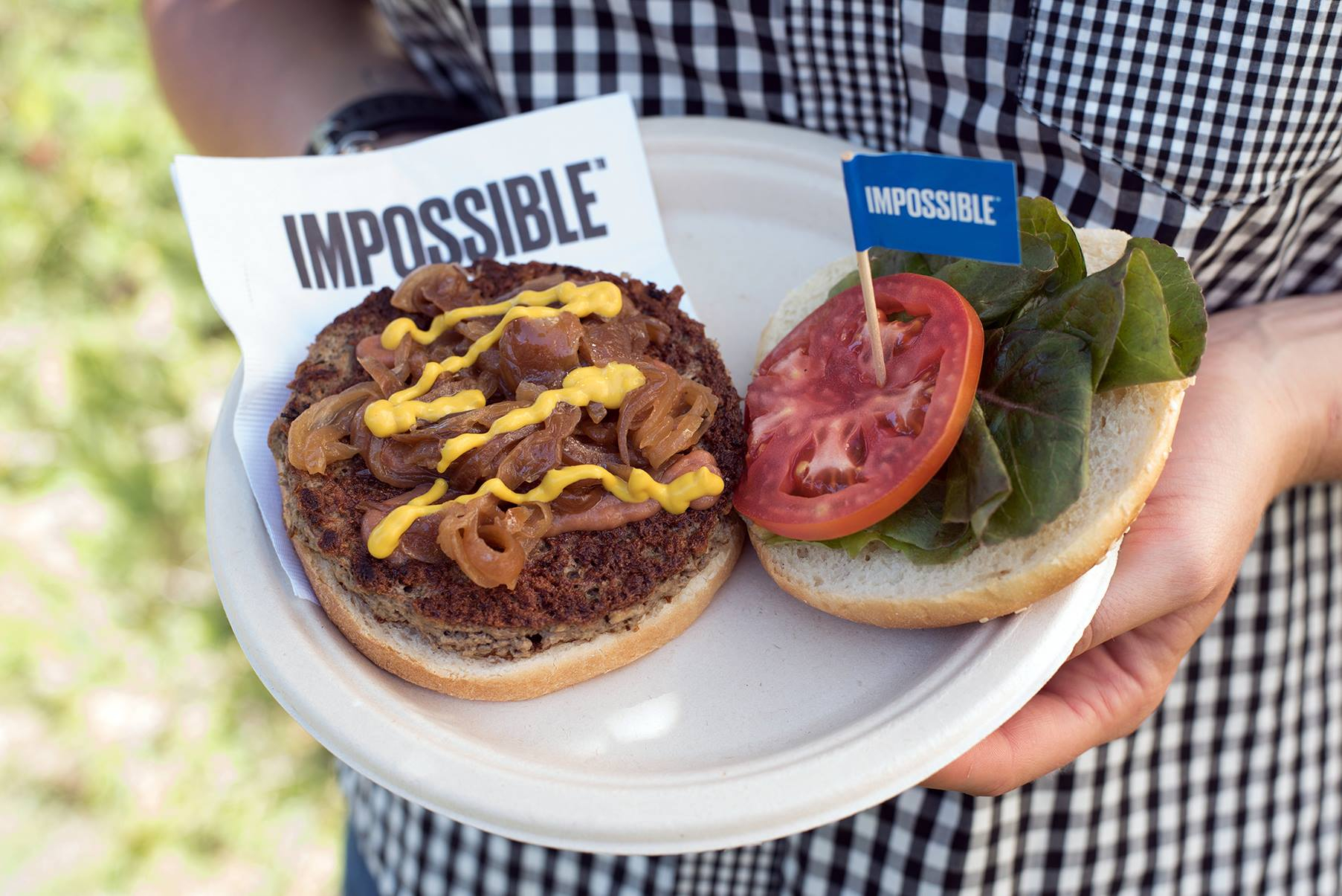 Companies like GFI are working to widely implement plant-based and cell-based meat and animal product substitutes with hopes to create a more sustainable future. Plant-based meat products such as the Impossible Burger are rapidly growing in popularity, with its product offered in various restaurants such as Burger King, Red Robin Gourmet Burgers and White Castle. / Courtesy of GFI

Plant-based meat has been largely available for some time now, and are a fast-growing sector in the meat market. The newer cell-based products are not yet commercially viable, though they have been taste-tested.

GFI is working to make these alternatively sourced proteins readily available to the public so that they “compete based on price, taste and convenience,” the three fundamental parameters upon which consumers generally make purchasing choices, Swartz said.

If a plant-based or cell-based burger was next to its conventional animal counterpart in a grocery store, Swartz predicts the consumer would choose the alternatively sourced burger.

“In addition to competing in the three fundamental factors, you have no antibiotic use and a lower greenhouse gas footprint [with the plant-based or cell-based burger]. Then you can gain consumer adoption because more people — especially younger demographics — tend to select or make more conscious choices with their food and cite environmental concerns or sustainability issues when making their food choices.”

But GFI’s efforts have not gone unnoticed by the dairy industry and Cattlemen’s Association, which has pushed back through lobbying efforts and state legislature bills. Over 20 bills have been brought up in state legislatures across the U.S. that act to restrict the labeling of alternate meat products. Most focus on prohibiting labeling products as “meat” if they are not derived from an animal source.

Swartz admits there is also a challenge in getting consumers to adopt the relatively novel technology that produces these proteins, especially cell-based ones, as the concept may “seem unnatural or has a synthetic feel” to it.

However, he continued, proper education may the key to larger acceptance. “GFI is looking to get ahead of the curve in terms of education for the public as well as the regulators and the stakeholders. It can go a long way in terms of preparing people for maybe what to expect in the future and making sure that things are fairly labeled and understanding what they are.”

Additionally, large meat companies such as Tyson and Perdue have invested in plant-based or cell-based food companies and hope to rebrand as protein companies, Swartz noted.

In the short term, the consumption of animal meat products will likely continue to rise alongside an increased consumption of alternate products such as plant-based proteins. With greater demand of these alternative products over time, GFI expects consumers will make more conscious decisions driven by animal welfare or environmental issues.

But despite more conscious efforts to create protein alternatives and for people to buy those alternatives, the per capita meat consumption in the U.S. continues to rise each year, with last year being the highest yet.

“We [at GFI] don’t view ourselves as activists, but we do think that things can be better improved through technology,” Swartz said. “Despite a large trend in increased plant-based meat consumption in the U.S. from 2017 to 2018 with about a 23 percent increase in plant-based meat sales at retail, it still makes up less than one percent in the meat market.”

GFI is looking to 2050 as a long-term goal for “taking a large chunk out of conventional or traditional animal agriculture industry in terms of market share.”

“The goal is not really to target or eliminate animal agriculture, but to provide consumers with the technology that hopefully can impact the world in a more sustainable manner and eventually that may result in a large decrease in animal agriculture. But it is too early to say whether these things will eventually go away for sure anytime soon,” Swartz said.

Learn more about GFI at gfi.org.