The Daily Nexus
Opinion
How to Succeed in Business Without Any Balls
April 11, 2019 at 8:00 am by Annabel Li

I stood on the outside, looking into Corwin Pavilion. Well-dressed students walked from table to table. The biggest company there was Merrill Lynch, boasting the longest snaking line of hopeful kids.  People had padfolios out and were scrambling to stuff their collection of pamphlets into tight pockets.

I pushed past kids in oversized suits and tight pencil skirts, clutching my folder of resumes to my chest. I experienced the recursion of getting into line after line, waiting behind 10 or 15 people who looked exactly like me, anxiously rehearsing in my head the conversation I would have with company representatives.

As I softly whispered “Hi! I’m Annabel, I’m a first-year” to myself,  I noticed a tall, sandy-haired guy push past everyone else. A dimple in his tie and and gel in his hair, he glided to the front of the line and introduced himself, interrupting the stiff conversation happening between the recruiter and the small bespectacled girl at the front of the line. 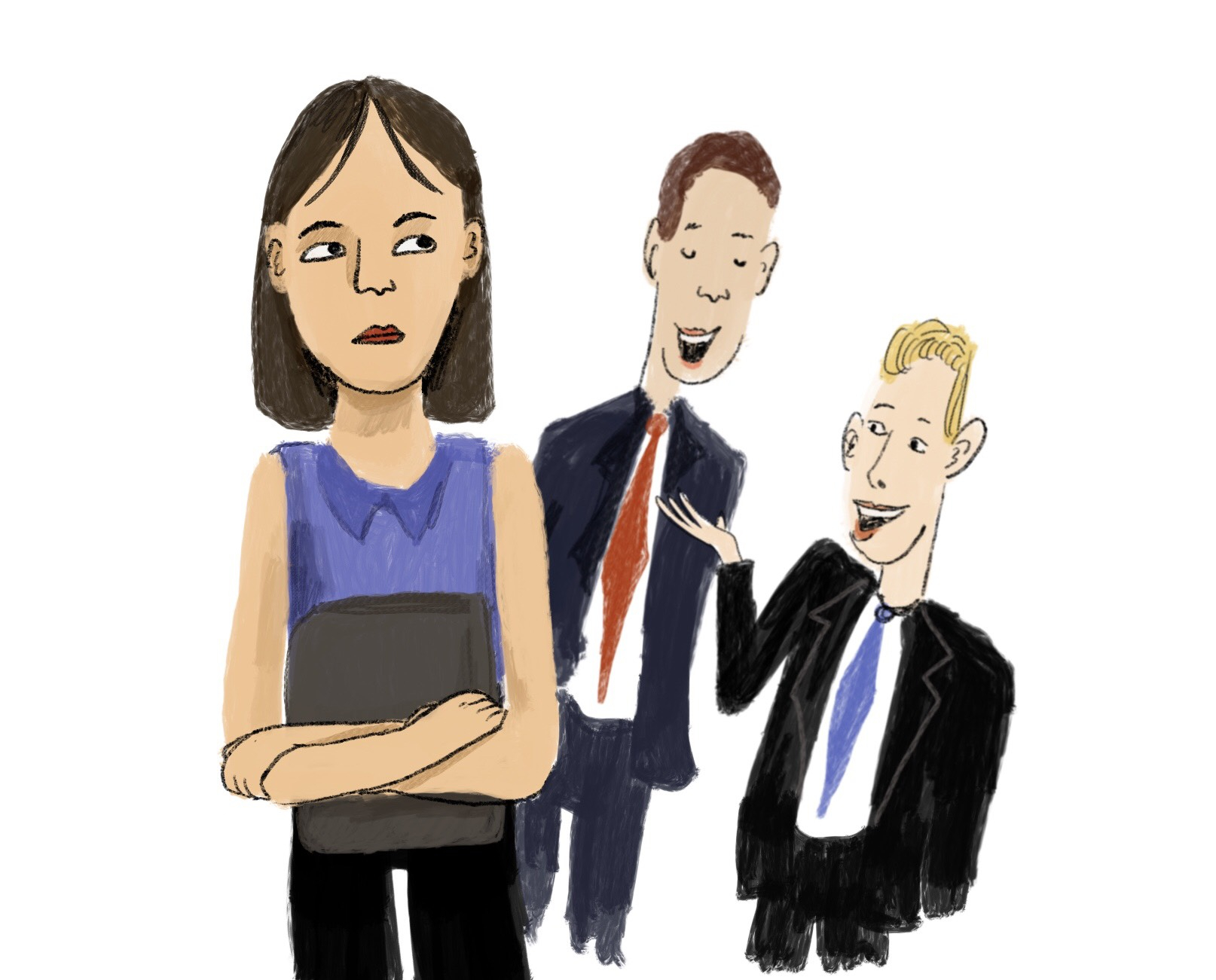 I observed this from my position behind several people;  it was almost as if the girl had completely disappeared. The older man shook the student’s hand, slightly turning his back on her. She melted into her position at the beginning of the line and waited politely, playing with the ring on her finger.

I looked at the other people with me who shuffled their feet and shrugged. Some didn’t even look up, still scanning their resume for errors. The conversation continued at the front as the sandy-haired student said something and the recruiter laughed. The man looked like he could be the student’s father. They were strangely friendly and comfortable, like they were speaking their own language. Standing several feet away amongst everyone else, I knew that I had already lost.

I went to bed that night feeling like an idiot. Why didn’t I do that? Why wasn’t I bolder, more confident? Replaying this moment in my head, I realized that this was the type of guy to get job offers, the type of person who stood out — someone who acted like they deserved it already.

The glaring error in my thinking only becomes noticeable upon retrospect. I did not feel disdain toward the sad injustice of the existing social system in finance; instead, I thought I just wasn’t doing the right things. This anger instead became redirected at myself in the form of competitive jealousy. I needed to emulate the energy of a confident businessman, act like I was entitled to the position, talk like I was already a part of the club — instead of meekly asking about open spots or the recruiting cycle, instead of second-guessing the extent of my qualifications. It was my fault.

I would meet many more of these sorts of people. Confident energy, almost rude assertiveness, always male. I looked up to them like role models.

Since the first day that I told my parents I wanted to go into finance, they had warned me over and over: these banks have a fratty culture, casual harassment of women, wage gap, etc.

I never stopped and thought to myself, is this the right way to assess things? Should I accept that the path to success entails inflating my ego a little and acting like I was above everyone else?

Since the first day that I told my parents I wanted to go into finance, they had warned me over and over: these banks have a fratty culture, casual harassment of women, wage gap, etc.

I didn’t care. I knew these flaws weren’t universal, that banks were becoming more inclusive and cognizant of pay equality. I was willing to take the chance if it meant I could work on company deals. If I wanted it enough and tried hard, I could create the professional future that I wanted. These general assertions about prejudice in finance did not feel personal to me and even though I knew of them, they still felt vague, political and therefore, irrelevant.

Now I look back to that moment, seeing this recruiter and a sandy-haired student share stories about their wife and girlfriend, chat about golf, about watches — like they were part of a club I couldn’t join. Was this the root of what I was up against? Not something explicitly related to money or harassment, but an unspoken brotherhood?

It was like we all knew there was a certain type of person who belonged in business. The items on my resume were a formality. Another guy could be twice as compelling by simply exuding enough unearned confidence to convince everyone of their excellence.

Where did this energy come from? How come, as hard as I try, I couldn’t seem to replicate it to the same degree of efficacy? I realized soon enough that this bravado was a symptom of some larger intrinsic characteristic. It happened as I was working on a Case Competition for a business club.

Was this the root of what I was up against? Not something explicitly related to money or harassment, but an unspoken brotherhood?

For the competition, my team was to prepare a business strategy pitch for a company. My group mates and I started by drafting a business memo. At the top of the Google Doc, where we addressed the recipients of the memo, I left a comment to “look up C-level management” as a reminder to look up the specific company officials we wanted to name.

Later that night, I got an email notification that someone had replied to my comment. “C-level executives are essential to any modern…” I stopped reading. This was a definition. I laughed and sent a screenshot to my friend: “My groupmate thinks I don’t know what C-level management is.”

But, instead of reciprocating my attitude, I was met with a different message: “Isn’t that kind of underestimating you?”

I guess so. I wondered why my first response wasn’t to feel offended.

Having participated in so many business events and having spoken to VPs from Barclays who would casually tell me that “seeing more women where I work would make my day prettier,” I suppose I grew immune to it, deciding it was easier to rise up in a field by laughing off what was uncomfortable instead of trying to correct it.

The modern woman now faces this social dilemma. A conflict between our individual drive to conform to existing rules and rise up, and a moral obligation to reject the status quo — sacrificing the way to the top. I was late in acquiring the necessary lucidity to talk about this subject. Because, although I knew I was female, I did not see myself as part of “women.” The women who shake off unsolicited remarks about their appearance, who need to work up the courage to walk in that office and ask for a raise, who face the hurdles of implicit bias in their peers and employers. Maybe I was once too young to know it, but now it’s clear and painful. Gender can overrule qualification in a single instant. In a first impression when your handshake wasn’t strong enough, in an interview when you sounded too nervous and high pitched, and ultimately in an office, when your boss decides to give Paul a raise because Paul is like a young version of himself.

This self-perpetuating homogeneity results in interesting numbers:  85% of finance executives are male and 74% of senior managers are male. Perhaps this is due to variation in personal interest? Women could just not be that interested in finance. However, further down this corporate hierarchy, the gender diversity of regular professionals in finance is 46% female and 54% male. This means the disparity on the top is due to disproportionate upward mobility of men vs. women inside of a company.

The best way that this can be remedied is to look within ourselves as women and find boldness. Not boldness in imitation of our male counterparts, but boldness because we actually do believe we are qualified enough for that promotion or that we have what it takes to manage a staff. We need to take ourselves seriously, and soon enough, the world will follow.

Annabel Li believes that empowerment is the first step toward equality in the workplace.