The Isla Vista Community Services District launched its SeeClickFix app on Sunday, a service meant to allow Isla Vista residents to report graffiti, trash, vandalism or lighting issues to the district, which will then send out workers to fix the problems themselves or forward the requests to the county. 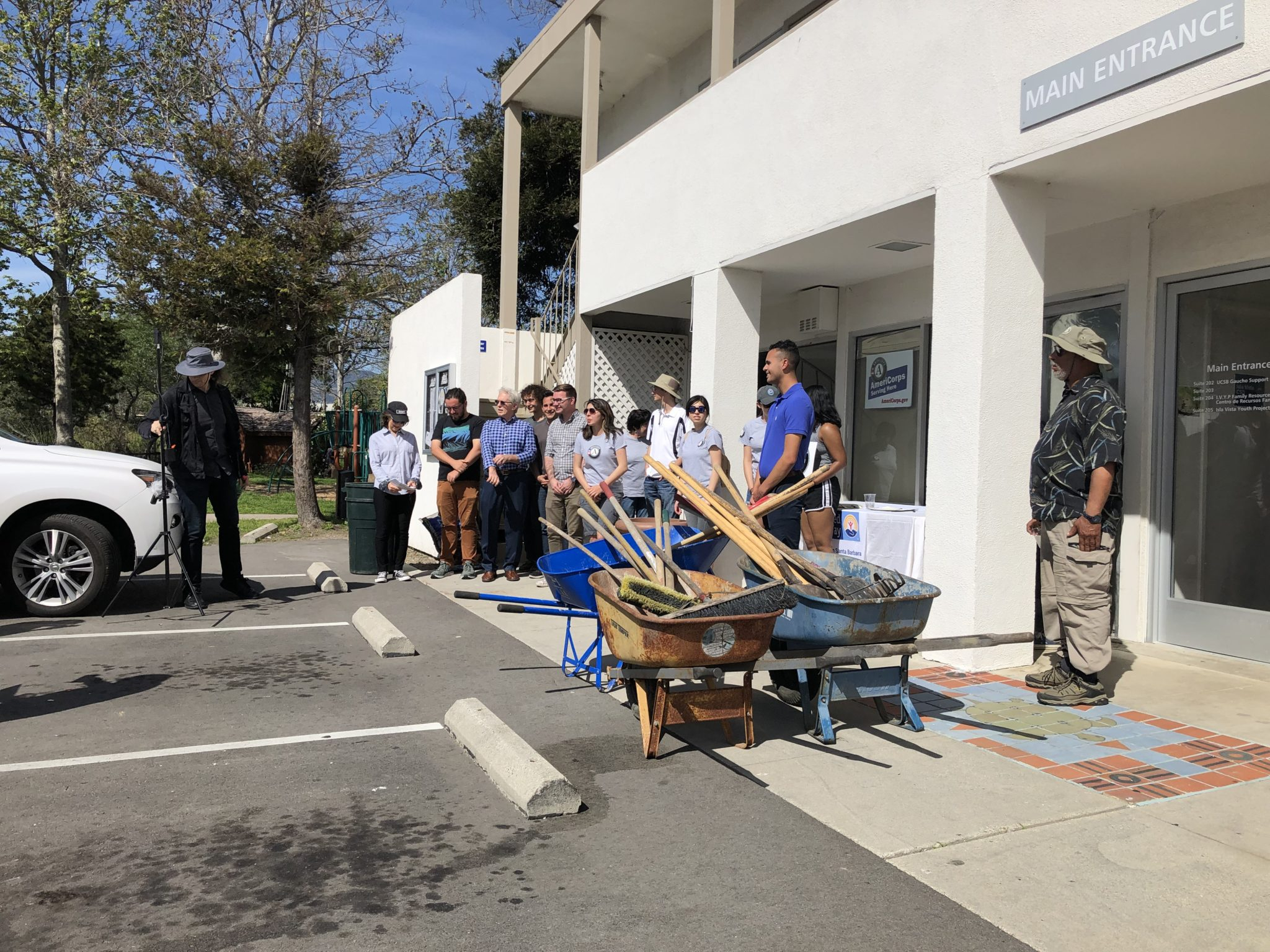 The app was introduced during the launch event on Sunday. Sanya Kamidi / Daily Nexus

The district is working with SeeClickFix and United Way of Northern Santa Barbara County to run the beautification program and will hire houseless community members to help make Isla Vista a “cleaner, better place to live,” Isla Vista Community Services District (I.V. CSD) Board President Spencer Brandt said at the launch on Sunday.

Brandt recalled the first time he visited I.V. with his family and said it was “clear from the beginning that this was a place that was special.”

“It was also clear what my parents’ opinion of it was, which was that it’s weird that there are mattresses lying on the corner, and that there’s trash in the gutters,” he said.

“We all know, standing here today, both as folks who have lived in Isla Vista and those who have been coming here for years, that’s not what Isla Vista is really about. But it does say something about the fact that there is a lot of quality of life issues that can be improved here.”

Brandt hopes to appease these concerns through the use of SeeClickFix. By using the app as a mobile steward, users can help keep the streets of I.V. clean simply with their phones.

Brandt noted that there’s been a “rise in rhetoric” in the county that has dehumanized houseless people.

“I really think that in Isla Vista, we here can be a model for trying to solve these problems and help them get back on their feet rather than pretending that if we just push things out of sight, out of mind, that the issue doesn’t exist,” he added.

Third District Supervisor Joan Hartmann, who also spoke at the launch Sunday, took a moment to acknowledge Cesar Chavez’s birthday, and the “community building behaviors” that he demonstrated.

Hartmann referenced the Downtown Streets Team in the Bay Area, which works toward “ending homelessness by restoring the dignity and rebuilding the lives of unhoused men and women,” according to the website.

“They first did a survey of homeless people and found that it’s not being cold, it’s not being hungry, it’s being invisible. That’s the hardest thing about being homeless,” she said.

“So this program allows really a triple bottom line: to give people jobs and get them engaged, it makes your community better and it makes each one of us more connected.”

Christina Lydick, beautification manager for SeeClickFix Isla Vista, said the program was going through the final stages of hiring at the moment. She anticipates bringing on five to seven people to work on graffiti abatement and other beautification initiatives in I.V.

Abboud initially utilized SeeClickFix in 2012, when he worked in Associated Students. Back then, he said, the program was much simpler, and there was no designated group working to fix the problems.

“We were working on county issues and trying to figure out how we can make Isla Vista better with no local government back then,” he said. “We’d see what people put in and we’d try to work on them each without a coherent system and without dedicated staff.”

When the I.V. CSD was looking for ways to launch the beautification program, they considered simpler options, like Google Forms, but knew that it wouldn’t give them the ability to collect the data that they wanted to, Abboud said.

Once they reached out to SeeClickFix, the board found it to be the most effective and reasonably priced option.

Abboud said the district spent approximately $5,700 for a one-year subscription, which included the district with two accounts, one for Abboud and one for Lydick, and the support of the SeeClickFix team in setting up and managing the app.

The service has improved exponentially since Abboud first used it when he was an undergraduate, he said.

“Before it was [a] very text-based website…I don’t even think it had a GPS,” he said. “It was brand new.”

Now, the program is much more user-friendly, he said, and the company has helped the I.V. CSD set up the front end of their app and design a workflow system.

Abboud also noted that it has been helpful to hear from the company about how other cities have developed their apps. For the I.V. CSD, one of the most important aspects of the app is its ability to collect data on the kind of work requests it is receiving and how many of them.

“Over the long term if we had that data accumulate, we’ll just know better in terms of how we’re spending our money and what we’re getting done,” Abboud said.

While the work orders are limited to graffiti, trash, vandalism and lighting issues for now, the board hopes to expand it to include fixing potholes and uneven sidewalks, and even potentially partnering with UC Santa Barbara to collect work orders for on-campus problems.

“We’ll do things like that in the future, but we wanted to launch with what we can, with a minimum viable product, which is this beautification kind of stuff, and then we’ll move towards other areas in the future,” Abboud said.

This sounds like a good idea in theory, but homeless people (a.k.a. bums) are lazy. There is a reason why they are bums, and it’s not because they are hard workers.