The Daily Nexus
Sports
UCSB Set to Face Off Against Fullerton in Big West Semifinals
March 15, 2019 at 3:10 pm by Richard Benites 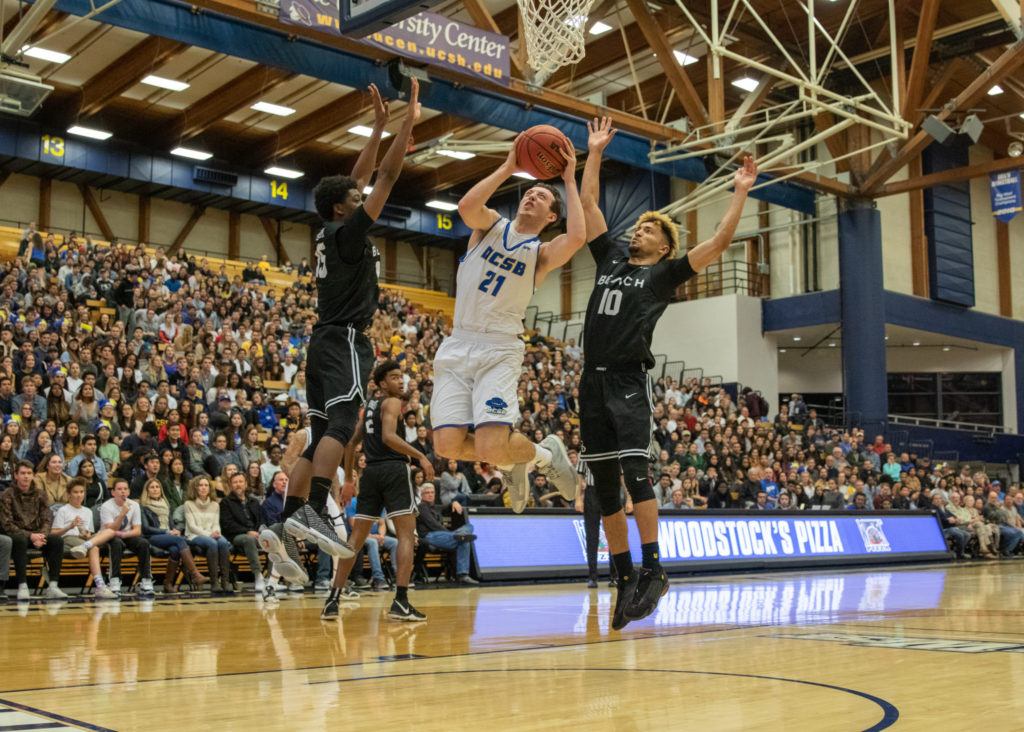 It’s three wins in a row now for the men’s basketball team, as late drama favored UCSB during yesterday’s conference quarterfinal against CSUN. As it stands, the Gauchos will be taking on Cal State Fullerton in the next round of the Big West Tournament.

News from around the league includes first-seed UC Irvine’s dominant performance in its 63-44 win over UC Riverside. In addition, a lower seed upset also occurred as No. 5 Long Beach State just edged out No. 4 Hawaii after a close 68-66 win; per the Big West Tournament bracket layout, UC Irvine will be facing Long Beach State in the other semifinal match.

UCSB’s overall record on the season now improves to 22-9, only a win away from tying the team record for most wins in a single season. This same record was achieved by the men’s basketball team just last season, as well as during the 2007-08 season’s campaign.

Coming off a big postseason win, the Gauchos are in inspired form that will hopefully carry them through the remainder of the Big West Tournament. As it was during their last encounter, UCSB versus CSUN once again went down to the wire. This time, however, the Gauchos managed to erase a 12-point deficit, late in the second half, as the team mounted a comeback win of 71-69.

Cal State Fullerton, meanwhile, will be eyeing postseason glory as well as a .500 win percentage in this upcoming match versus UCSB. The Titans’ overall record on the season now improves to 15-16, while their 10-6 conference record, the same as the Gauchos’, seeds them as the No. 3 team in the Big West.

Cal State Fullerton’s quarterfinal matchup against UC Davis proved to be an overtime affair as the Titans earned their hard-fought win by a score of 75-71. This is the Titans’ first win in the month of March, and they will be looking for a second if they hope to keep their season alive.

The Gauchos split their two confrontations versus the Titans during the regular season, with a loss on the road before winning at the Thunderdome in late February. In terms of the history between these two sides, UCSB has the slight advantage in leading the all-time series by a record of 48-40.

In UCSB’s corner, sophomore guard JaQuori McLaughlin and graduate guard Ar’mond Davis will be the ones to watch for this upcoming postseason matchup. Gaucho Head Coach Joe Pasternack started off proceedings a bit differently in the quarterfinals by employing a starting five made up of four guards, instead of the normal three or two, and this paid off immensely. In their last game against CSUN, McLaughlin and Davis combined for 31 points, along with five rebounds apiece. Both players have played a significant role for the Gauchos all season long, and their presence in the postseason is a testament to the depth of UCSB’s star-studded roster.

On the Titan end, the usual catalysts of senior guards Khalil Ahmad and Kyle Allman Jr. were once again responsible for their team’s success. Both the top two scorers for their team in terms of total points, Ahmad and Allman Jr. were the only Cal State Fullerton players to finish with double digits in scoring for the quarterfinal bout against UC Davis. It would be in UCSB’s best interests to find a way to halt this dynamic duo’s offensive production.

This installment of the Big West Tournament semifinals is shaping up to be an exciting one,  the second-seed Gauchos take on the third-seed Titans at the Honda Center this Friday, March 15, at 9 p.m.