The Daily Nexus
Fine Arts
The Joffrey Presents: Not Your Grandma’s Ballet
March 12, 2019 at 3:26 pm by Hannah Jackson

When rattling off her list of people to thank for bringing the famed Joffrey Ballet back to Santa Barbara, Executive Director of UCSB Arts & Lectures Celesta M. Billeci makes one very poignant shout out: “Thank you to the UCSB students! I’d never forget you,” she said to a light smattering of applause.

However, a look around the audience reveals anything but students. The crowd is majority wealthy Santa Barbaran retirees and the occasional mother and her young dancer daughter. Every once in a while, a college-aged face will stand out in the crowd — but more often than not, they’re attending under obligation to the Dance 45 overlords and the desire not to fail one of the easiest GEs on campus.

Ballet does not traditionally have a good standing amongst the collegiate demographic for whom the Joffrey was brought to culturally enlighten. It is traditional, rigid and caters to a very slim margin of people. But Wednesday night’s performance by the prestigious Chicago-based company was a far cry from the slow classical music and bygone choreography long associated with the highbrow. The company performed four short works: Justin Peck’s In Creases, Nicolas Blanc’s Encounter, Alexander Ekman’s Joy and Annabelle Lopez Ochoa’s Mammatus, all of which — save for Peck’s — were created as original works for the Joffrey. Each piece challenged the conventional notions of ballet as an art form and left smiles plastered on the faces of the attendees (even that of the most chagrined Dance 45 student).

Peck’s In Creases was an appropriate opening to set the mood for the evening, as at its core it is a dynamic celebration of human form. Created in 2012 as his inaugural work for the New York City Ballet, where he is currently a soloist and serves as Resident Choreographer, Peck manipulates conventional conceptions of ballet into a geometric sequence of bodily distortions. Set to Philip Glass’ “Four Movements for Two Pianos,” eight dancers interact with each other as well as the pianists to break the traditional mold of separation between dancers and musicians.

Peck’s love of powerful lines emerged throughout the piece, as his dancers would frequently strike strong 90 degree angles with both arabesques more familiar with traditional ballets, as well as sharp, angular arm movements more in line with contemporary works. In spite of his youth, 31-year-old Peck is one to watch; many consider him one of the great up-and-coming choreographers of this century. The Joffrey’s choice to perform an experimental work by a wunderkind perfectly reflects their self-awareness as a progressive company struggling against the tide of antiquated norms and scandals in American ballet companies.

Immediately after came Nicolas Blanc’s Encounter, a sultry duet created specifically for the company. Blanc’s use of a sole prop and sparse costumes allowed the audience to immerse themselves in the narrative expertly woven by the dancers who performed it. At times it is unclear whether the presence of the female dancer is an apparition or whether Blanc intended for her to be a tangible figure, but this ambiguity does not deter from the feelings of raw, spine-tingling yearning evoked in the piece. Encounter was jazzy, sexy and smooth as the dancers effortlessly glided through jaw-dropping lifts, penchés and acrobatics.

A brief intermission allowed the audience to catch their breath, only to have it quickly stolen back by Alexander Ekman’s show-stopping Joy. The curtain opened to a dancer in a headstand, guiding the curtain up with his feet as other dancers emerged in various styles. One slid “Risky Business”-style in her pointe shoes (which, if you’ve ever worn a pair of pointe shoes, is incredibly fun) across the stage. A voice emerged through the speakers, pondering the meaning of joy, as more dancers filled the stage. “What if this piece is 30 minutes of this?” he asked to laughter. The piece transitioned as one female dancer strutted confidently onstage, pointe shoes in hand, and announced, “This is a shoe drop,” before releasing her shoes to the floor below. 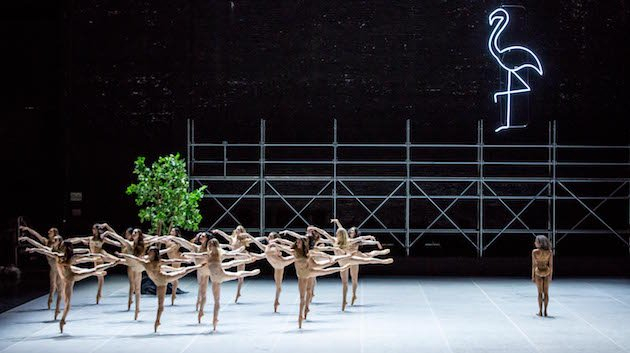 All female members of the company joined her to drop their shoes — a symbolic yet direct defiance of all structural norms of ballet — each shouting into a cacophonous void, “It feels sooooo good!”, “This is my favorite pair!” and “It’s cathartic!” As the women dropped their shoes in unison, they were joined by the introduction of a funky beat and a neon flamingo sign. At this point the dancers tied their pointe shoes at lightening-fast pace while the audience waited patiently, bobbing along to the rhythm.

The female ensemble portion of Joy was just that: joyous. The women danced like a pack of wild gazelles, letting their hair fly and their personalities shine. They balanced on their pointe shoes and grooved to the beat (reminiscent of Homer Bryant’s hiplet) and evoked the strongest aura of fierce, uninhibited girl power ballet has seen in a moment. Yet another highlight of Joy was the full company portion performed in heels (yes, even the men). The dancers fearlessly challenged conventions of gender and sexuality — one notable moment included the impossible-to-miss Fabrice Calmels lip-syncing to Tiga’s “Shoes.” In spite of the theatrics of Joy, its wholesome message prevailed: we find joy within doing what we love and the people who surround us.

Annabelle Lopez Ochoa’s Mammatus was likely the most aligned with the audience’s preconceived notions of contemporary ballet. Using the company to personify the formation of clouds, the piece exemplified a sense of organized chaos that so aptly explains the zany weather patterns Santa Barbara itself has been facing lately. However, one aspect of Ochoa’s piece that I couldn’t help but knit-pick was the costume: a high-necked black leotard and gloves paired with black knee socks, leaving only an awkward area of upper thigh exposed. The costumes hindered the beauty of Ochoa’s piece, as the confusing decision not to cover the entire leg truncated the dancers’ lines. The piece closed out the show on a breathtaking note, as principal dancers Dylan Gutierrez and Victoria Jaiani danced a stunning grand pas de deux through the lowering of the curtain. 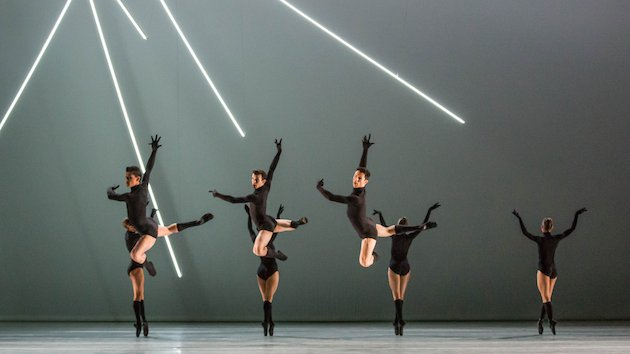 A moment of symmetry from Ochoa’s ‘Mammatus’. Courtesy of Cheryl Mann.

Following the performance, artistic director of the Joffrey Ashley Wheater spoke onstage with Professor Christopher Pilafian from the Department of Theater and Dance. In spite of the numerous scandals that have recently struck the dance world in conjunction with the #MeToo movement, Wheater believes that “dance is having a moment right now.” It was evident that while ballet still very much tailored to an older, wealthier audience, the Joffrey is leading the charge toward a more progressive and accepting future for the art form: starting with bodies.

“Robert Joffrey said, ‘A great dancer comes in every shape and size,’ and I believe that is true if you look at our company today,” Wheater said. And he’s right: throughout the performance I was pleasantly surprised by the (relative) diversity; the presence of breasts and strong thighs more common than that of alarming skinniness.

While acceptance of the human form as it comes seems like a small step, seeing attainable body standards on the stage of one of the world’s most renowned companies is no small feat. This permissiveness, in conjunction with the Joffrey’s confidence to embrace the funk and the spunk of experimental dance will lead them into the 21st century — now it’s time for a young audience to follow in suit.