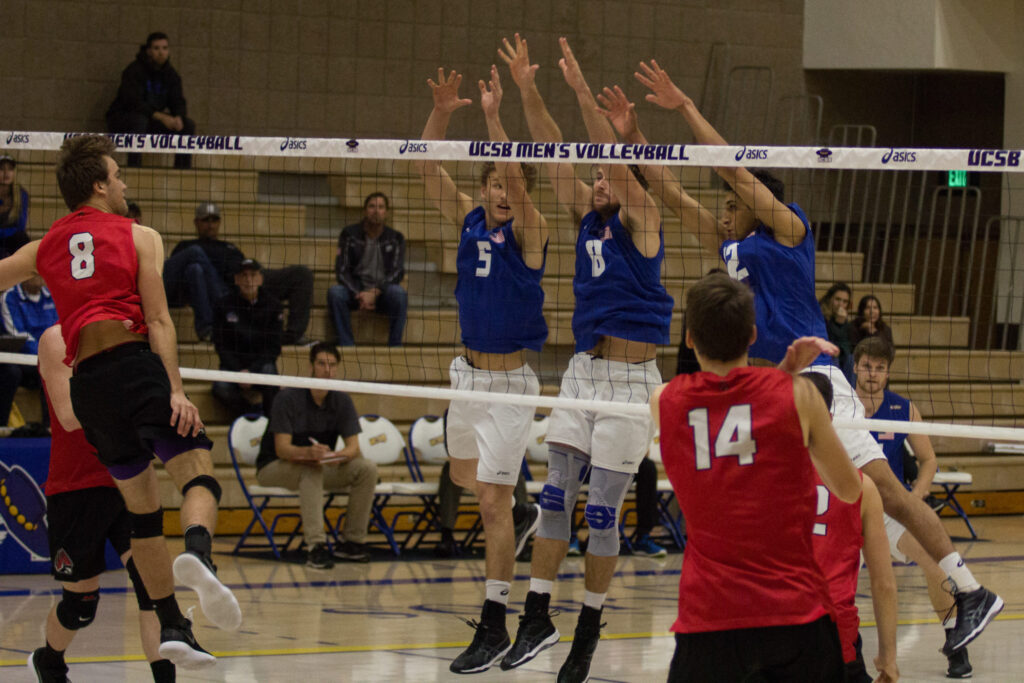 Coming into the night, the No. 4 UCSB men’s volleyball team had a lot to gain but a lot to lose.

The victory gives the Gauchos its longest win streak since 1980 and they also improve to 15-3 on the year, more specifically 10-1 at home. Lindenwood, who to its credit is one of six teams to take a set from UCSB during its 12-game run, falls to 7-12 on the year and has now lost three-straight contests.

Looking at the stats, however, one would probably not be able to imagine how the Lions were able to win a set.

For the night, Santa Barbara shot just a mediocre .248 shot percentage but in the first two sets was especially dominant. As a team it also had an impressive eight service aces, three of which came courtesy of Keenan Sanders. It also held Lindenwood to a much worse .68 mark on Friday.

Freshman Ryan Wilcox again paced the offense for the Gauchos earning a match-high 11 kills. This marks the third time in the last four matches that Wilcox has had double-digit kills.

In the first set, UCSB took control after the match was tied at 5-5. The Gauchos would go onto five of the next six points to take a 10-6 lead.

At 14-10, UCSB would finish off the set on an 11-6 run to win 25-16. In the first, it was a very evenly paced match for Santa Barbara. Both Wilcox and junior opposite Fredrick Spencer had four kills with Wilcox also having an ace.

In the second, it was more of Lindenwood’s mistakes that allowed UCSB to coast to another easy win at 25-14. The Lions had nine errors and show -.111 compared to the Gauchos .318 shot percentage.

The third set saw the roles completely reverse, however, as Lindenwood shot .267 and had a team-high 13 kills on the night. The team jumped out to an 8-4 lead and really never looked back.

In that set, Junior Connor Hipelius was the leader for of the pack for the Lions tallying four kills.

For the most part, even in the fourth set, Lindenwood played better. After taking a 2-0 deficit to the break, the Lions responded to hold the Gauchos to .111 and .136 attack percentages in the third and fourth sets, respectively.

However, the fourth set saw Lindenwood have many of the same problems as it did in the second. The Lions had 10 errors in the set and shot -.38 as the Gauchos took the last set pretty easy 25-20.

Senior outside hitter Corey Chavers, who for the second straight match did not have double-digit kills, finished with nine strikes, five digs and three total blocks. And, for the fourth-straight match, junior setter Casey McGarry had over 30 assists totaling 33, a team high.

With the win, UCSB got past the opponent it should have beat. Now, it will turn its attention to the toughest team in the country, No. 1 Long Beach State.

12 straight wins is impressive, especially considering the teams Santa Barbara has beaten along the way, but a 13th straight win would go a long way in helping UCSB show that it is for real.

The Big West Conference currently houses the four top teams in the country according to ranking. League play is now in full effect so everyone will see who are the pretenders and who are the ones that will compete for a national title.