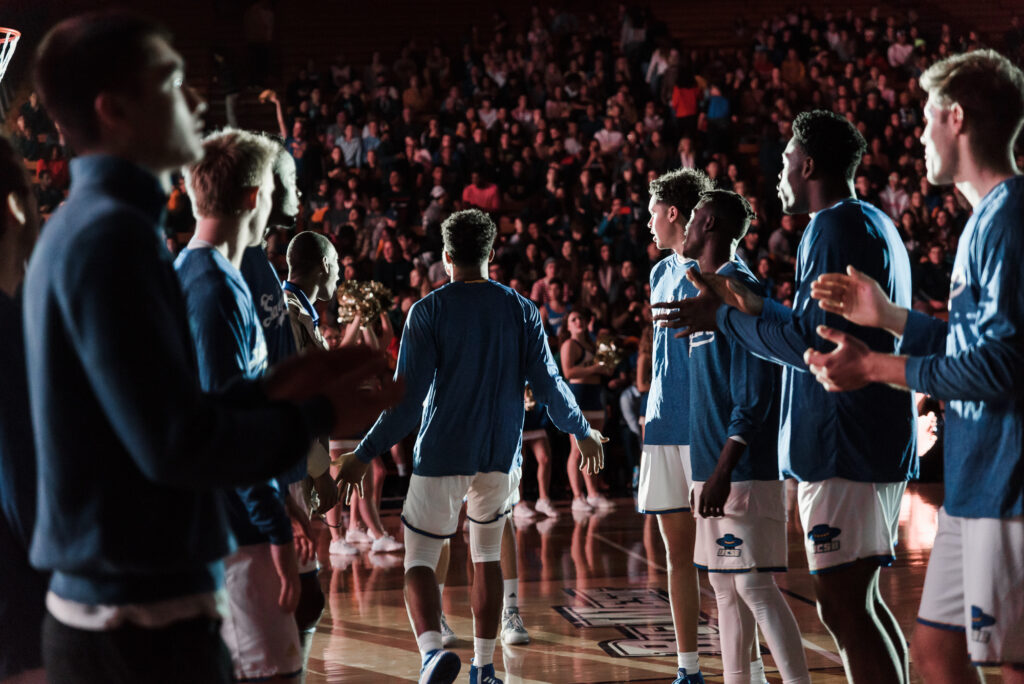 With 3.8 seconds to play, star junior guard Max Heidegger drilled a flamethrower three from 30 feet out to take the lead and propel the UCSB men’s basketball team over the CSUN Matadors with a 76-74 win in crunch time.

Not only did he deliver the game-winner, but in his third season with the Gauchos, Heidegger reached the 1,000 career-point milestone within the first minute of action. He became the 29th Gaucho in program history to reach that feat and moved into 28th place on the all-time Gaucho scoring list.

Heidegger produced 23 points, eight rebounds, three assists and one dagger jumper in the win over Northridge to move the Gauchos within one game of second place in the Big West with a 9-6 conference record, 20-9 overall.

On a night in which CSUN’s redshirt freshman forward Lamine Diane posted 34 points and 13 rebounds, it was Heidegger and the Gauchos who had the last laugh.

In the last meeting between these two teams, CSUN started off on an 11-0 run to burst out of the gates, but Head Coach Joe Pasternack had different plans in mind the second time around.

Santa Barbara opened up with a quick 7-2 run just minutes into the game as it looked to take an early lead over Northridge and set the tone immediately.

The Matadors swiftly retaliated with a 10-0 run of their own with production from the two top scorers in the Big West Conference in Diane and sophomore guard Terrell Gomez who combined to account for all of CSUN’s first 12 points.

Diane, currently ranked No. 4 on CBS’s Frosh Watch list, is on pace to become the first player in Big West Conference history to win both Freshman of the Year and Player of the Year in the same season while averaging 24.5 points and nearly 11 rebounds.

The Senegal native is one of only two freshmen in the country averaging a double-double, and neither of them are named Zion or RJ.

Gomez — the Big West’s reigning Freshman of the Year — and Diane are the cornerstones in this uncommonly concentrated Matador offense. The pair of young stars combined for 20 of the 26 field goals CSUN made all game.

The Gauchos found themselves down 19-11 with 12:33 in the first after Gomez opened up shooting 3-5 from beyond the arc. However, Heidegger came alive to lead the comeback.

With a seven-point tear of his own, the junior vaulted SB into the lead with 15 first-half points to ultimately close out on a six-to-nothing swing for UCSB and take a 44-38 lead into halftime.

Pasternack stormed off the floor heading into the break unhappy with the final possession, but come second half, the Gauchos were locked in.

Gritty play from UCSB inflated the lead to 58-46 with 12:34 in the second after a put-back tip-in from sophomore forward Robinson Idehen who added 13 meaningful minutes off the bench with six points on 3-4 from the field and five rebounds on top of a stout defensive performance throughout.

Down by 12, Diane and Gomez caught fire and led a hearty comeback of their own with help from junior guard Rodney Henderson, Jr., who hit three blast-off triples within the span of four minutes to take the lead 68-66 with five on the clock.

Henderson’s three makes from deep were the Matadors’ only points in the second half that weren’t contributed by either Gomez or Diane.

CSUN remained on top, but a Heidegger trey pulled the Gauchos within 72-71 with 90 seconds to play.

Freshman forward Amadou Sow made the most of a trip to the line and knocked down a pair of big-time free throws to put UCSB back on top, but a foul on Gomez caused another lead change in favor of CSUN who found itself in the lead, 74-73, sparing just 30.1 seconds.

UCSB had a full possession to scheme up the right attack, and after moving it around the horn, graduate guard Ar’mond Davis drove to the rack but came up short on a lay-in.

A loose ball was tipped up and sophomore guard JaQuori McLaughlin made an incredible hustle play to leap on the floor and save it before the ball rolled out of bounds.

With a second chance in store, Davis got the pass from McLaughlin fired out to Heidegger who released a desperation three in no-man’s-land and absolutely stuck the landing to deliver the win for UCSB.

You can run, but you can’t Heid. Max Heidegger had the Superman “S” on his chest with his late game heroics, and the Gauchos held off CSUN 76-74 in the epitome of a late-game thriller.

For the final game of the regular season, the UCSB men’s basketball team heads to San Luis Obispo to take on the 2-14 Cal Poly Mustangs for another chapter of the Blue-Green Rivalry on Saturday, March 9 at 7 p.m. in Mott Athletic Center.