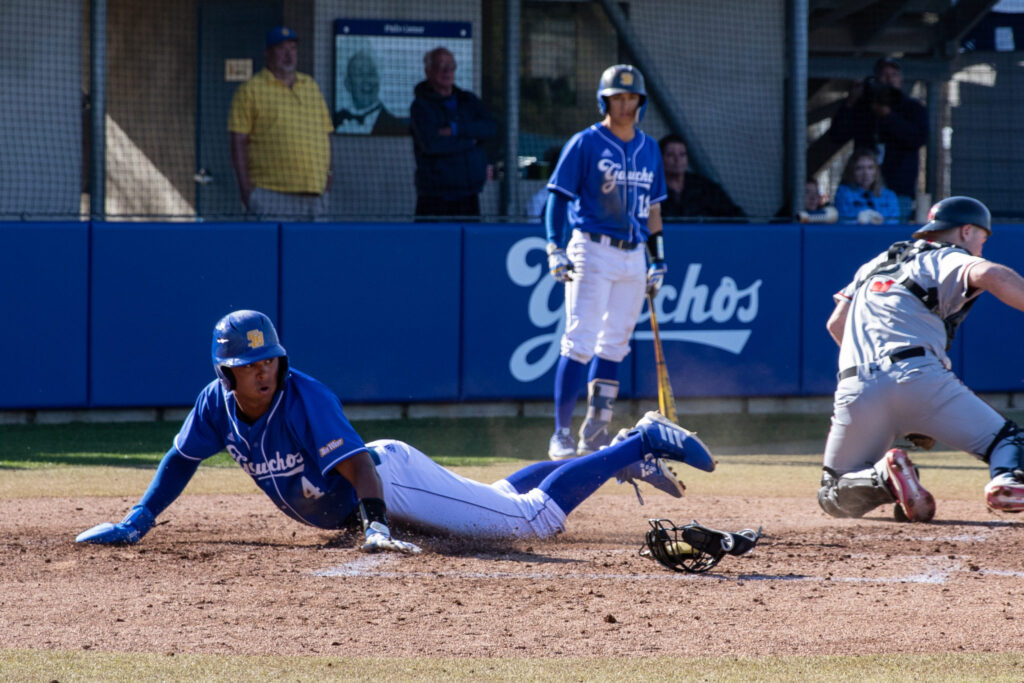 The UCSB baseball team pounced on Tulane early in Friday’s non-conference tilt jumping out to a 7-0 lead and despite a great effort from the Green Waves, the Gauchos held them off to earn a 7-4 win.

With the victory, Santa Barbara has now won seven straight matches and improves to 9-2 overall. As for the home team, Tulane drops to 10-4 and has now lost two of its last three games for the second time this season.

The Gauchos had its best offensive performance since its 14-0 win against Hartford with its seven runs on 11 hits. On the mound, junior lefty Ben Brecht was also spectacular for the majority of the night.

Both teams were tied at zero heading into the third when the UCSB hitting took off.

A single from senior Tevin Mitchell followed by a double from junior Tommy Jew gave the Gauchos runners on second and third.

Sophomore infielder Andrew Martinez then brought in the first run of the evening with a sac fly.

After back-to-back walks, UCSB had the bases loaded for junior Armani Smith who singled right up the gut to bring in two runs and give his team a 3-0 lead. A big hit for the outfielder as he was 0-10 in his previous three games.

Santa Barbara proceeded to keep the pressure adding two more in the fourth, one in the fifth and one in the sixth to give them a 7-0 lead.

Jew, who had his sixth multiple-hit night of the year going 3-6, added two of those four runs with RBI singles in the fourth and fifth while junior catcher Eric Yang earned his team-high 13th RBI of the year with a single in the fourth as well.

On the day, four UCSB batters would go on to earn multiple hits in the contest.

While the offense was finding its groove, Brecht was pitching a gem. Tulane had one hit in both the first and second innings. After that, the UCSB southpaw shut them down retiring at one point 16 straight batters spanning from the second to the seventh inning.

In that time, Brecht also struck out a career-high 11 Green Waves adding to UCSB’s Big West-leading 10.86 K’s per nine innings.

Of course, the hard thing for any coach is knowing when to retire a pitcher with a hot hand. And the Gauchos might have waited a bit too long as in the eighth inning fatigue caught up to Brecht.

After walking the first batter, Brecht got next batter to fly out and everything looked like it would be okay. That was until Tulane’s Kobi Owen crushed his first home-run of the year to bring his team within five.

After getting his first batter to ground out, Steigerwald gave up a single then another moon shot, this time by Tulane’s best hitter junior Kody Hoese, bringing the score to 7-4.

From there, however, freshman standout Michael McGreevy came in for his sixth appearance of the season and was spectacular not allowing for any hint of drama as he retired all four batters he faced, two of them being strikeouts, to earn the first save of his career.

In his limited experience, McGreevy has proven has proven himself to be a reliable arm out of the pen allowing just nine hits and one run in his 13.1 innings pitched. He has also struck out 15 batters.

Ultimately, UCSB’s win on Friday showcased the immense talent it has on both sides of the field. However, it also showcased the Gauchos not taking full advantage of their opportunities as they left 15 batters on base.

They also struck out a total of 14 times, but, they did enough to earn a hard-fought road win. Those are always hard to come by and they are good to pick up in the early parts of the year.

UCSB will continue its series against Tulane at noon on Saturday, March 9 at Turchin Stadium.