“New freak, had to cut my other lil’ bitch off” – Rich the Kid

“Fuck his baby mama, tryna sneak diss. I took her to my penthouse, then I freaked it” – Future

Since the day I got into music, hip hop was always my primary interest — the fast-paced flows and mesmerizing beats paired with complex lyrical ingenuity were incredibly appealing. I was never fazed by the way rappers talked about sex, drugs and money; I always figured this was just a part of the genre and never thought twice about it.

Finally, at the age of 20, I began to question the nonchalant objectification of women through the demeaning lyrics I listen to almost every moment of my day. Women become the object of an image that these rappers frame, and their listeners are completely desensitized to it.

What has made it so normalized for rappers, who lead today’s most popular musical genre, to generalize and sexualize women as much as they desire?

When I first heard Chance the Rapper’s 10 Day, and then a year later Acid Rap, hip hop was the genre that I continued to fall in love with. By the time I was in high school, I was digging through SoundCloud looking for new rappers in a very male-dominated space of music. I stumbled upon some of my favorite rappers like Kanye West, GoldLink and Kid Cudi, all of whom still remain among my most beloved musicians. I was a teenagr listening to women being called “hoes,” but it somehow didn’t matter to me — it was just a part of the norm of a genre that I chose to be interested in.

I frequently attend rap concerts when I get the chance. The room, mostly filled with men, chant in unison: “I fuck yo bitch for the irony.” And, without thinking, I sing along to these lyrics as well. That’s something that likely won’t ever change and it’s part of the fun of it for me, despite how unorthodox it sounds. 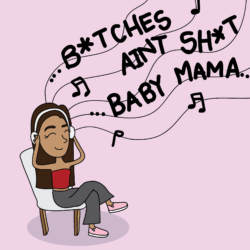 But as a woman myself, am I a part of the issue? Should I be condemning the lyrical weaponry of almost every contemporary rapper and stand up for the rights that women deserve and are fighting for in our society? Am I a part of the perpetual cycle of objectification by allowing men to demean women and bolster their masculinity in the world of hip hop? I’m not entirely sure why I happily listen to this music while dismissing the way men talk about women.

Hip hop is just supposed to be tough, right? The more badass you are the more you fit in — even the most revered of figures, Dr. Dre, has rapped about his aggression toward women. “Yo, I tied her to the bed, I was thinking the worst / But yo, I had to let my n*ggas fuck her first, yeah / Loaded up the forty-fo’, yo/Then I straight smoked the ho,” he raps in N.W.A’s “One Less Bitch.”

And now, up-and-coming rappers who are molding a new era of rap, such as Kodak Black and Famous Dex, continue this detrimental image of women and have also been accused of abuse in their personal lives. All the while, these artists maintain millions of streams and vastly large fanbases – ones that even include those who fight for women’s rights and equality.

Women have always been a central focus of degenerative rap lyrics. Rappers are constantly telling women how to present themselves or act to their pleasure, portraying women as solely objects of their sexual gratification and depicting them as nothing more than “gold diggers” and “cheaters.”

Kendrick Lamar, one of the most cherished rappers, has been criticized for saying, “Show me somethin’ natural like ass with some stretch marks.” While giving attention to natural female aesthetics other rappers dismiss, he continues to set certain expectations for women and instruct them how to express themselves to fit his own desire.

The hegemonic structure of hip hop has always made assertive the hyper-masculinity present to any listener. This cycle persists as men try to fit in with others by treating women as a marginality in the world of rap. Here, violence and mistreatment are OK. It’s OK to mumble slanders of how women are nothing more than vehicles for sex.

Historically, being a man meant being powerful: having the most women, money and drugs. And it was difficult to move beyond this trend. Rap has now stretched so far past this, yet we still hold rappers’ words about women to the same standards as we did before.

Because of this, female rappers, who are already quite marginalized in this genre, seemingly play to the hyper-sexuality that male rappers depict women to have. From my perspective, Cardi B and Nicki Minaj, two of the most known female rappers of this generation, play into this trope. Instead of helping other women in the genre, they reinforce the idea of the limited female space in rap and have even gotten into physical and verbal fights with each other. This disappoints me, as these talented female rappers are overshadowing the beauty of having women in rap in the first place.

Women should have an expanded space in rap music, and women should support each other in the genre instead of allowing for male domination to continue. In the past, when I heard unfavorable lyrics in rap music, I did not take it personally, as it just seemed like an established right for men to disrespect women in this context. I now think there should be a change in what is considered acceptable. Young girls should not be listening to their favorite rappers call women “hoes” and their favorite songs shouldn’t be about “bitches.”

Yet, Famous Dex, Dr. Dre and Kendrick Lamar were all in my Spotify 2018 top streamed songs playlist. And honestly, that probably won’t change next year. By listening to these artists, I am not supporting rappers’ misogyny. Instead, I hope and advocate for change while still appreciating rap music as my favorite genre.

I think a lot about how easy this trope has progressed in the genre, the convention of humiliating your foes in rap comes at displaying your bars, but by weaving your bars at the expense of someoneone else, usually your male foe, and degrade his partner while you’re at it? Easy points in a rap battle.
Now it’s transgressed to such a natural component of modern rap, it’s definitely worth further analysis and discussion amongst artists.
Great piece!

Thank you , Neha. I’m glad someone said it.

Fact is it’s about Black Women as objects of disgust for rappers and your society of universal listeners are okay with that. Clearly. Strangely it’s only media are where you don’t have to label blacks to know that it’s a black person. Now if you add the adjectives White, Jew, Chinese or Latina to Whore, bitch or pussy and you got a problem. Since most of this trope comes from black rappers, the consensus I sense is that the subjects of their disgust is black females and everyone is okay with that as long as it stays that way. White… Read more »

Thanks so much for this, Verd! I couldn’t agree more.