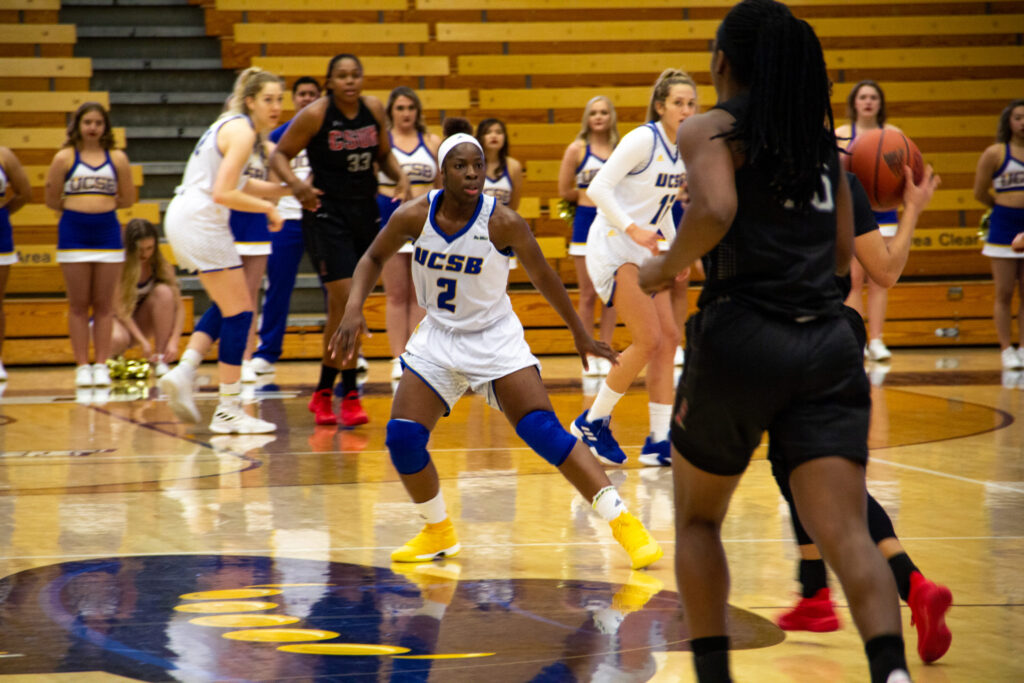 After a tight win against rival Cal Poly, the UCSB women’s basketball team was able to get their second consecutive win on senior night against UC Riverside with the final score being 61-44, improving to 8-20 overall (5-10).

Santa Barbara honored their only senior, redshirt Paris Jones, before the game. Jones averaged two points and a rebound in a little more than 10 minutes of play on the season as well as provided veteran leadership for the young ‘Chos.

It was a hot start for both teams as they each shot 47.1 percent from the field. Redshirt junior guard Coco Miller led the way for the Gauchos with five quick points, as she helped create a three-point lead at the end of the first quarter. Miller has been the squad’s most reliable scorer as she is averaging a team high 13 points per game this year.

Sophomore guard Keilanei Cooper was the early spark for Riverside as she had eight points, including two three-pointers.

The second quarter would be a defensive battle between both squads, which was a stark contrast from the first quarter. Senior forward Malou De Kergret for UCR struggled mightily in the period as she went one for eight from the field. UCSB would head into halftime with a one point lead, as they looked to make their second half adjustments to extend their lead.

Santa Barbara ended up dominating the third quarter as they outscored the highlanders by nine points. Miller was on fire as she knocked down three three-pointers, giving her 16 points.

Although she has been inconsistent at times, Miller has been huge for the ‘Chos in their wins. As the group’s best scorer, she has shown the ability to not only knock down three-point shots but also attack the basket. With the season coming close to the end, many fans will look forward to seeing her take her game to another level next season.

UCSB would carry this momentum into the fourth quarter and win the game fairly comfortably by 17 points. Sophomore guard Danae Miller was able to find her rhythm late in the ball game as she scored nine points. Jones checked into the game with two minutes remaining but was unable to score on her layup attempt.

This may have been the Gauchos best defensive quarter all season as they held the highlanders to just five points and 14 percent from the field. UCR was unable to find any rhythm on offense due to the consistent ball pressure and good defense by Santa Barbara.

Despite this being a rebuilding season for UCSB, there is much to be excited about for next season. Everyone from the team except Paris Jones will be returning, allowing the team to grow together with little turnover.

The Gauchos have shown flashes throughout the year but have not been able to string together victories. With the squad continuing to develop their chemistry, they will surely make an impact in the Big West Conference for the next couple seasons.

It would have been easy for Santa Barbara to stop giving their best effort during their tough stretches but head coach Bonnie Henrickson was able to keep the team on course. By continuing to play hard, the team has started to be rewarded by getting more wins.

In their past five matchups, UCSB has been able to win three of them, showing that they have taken major strides from earlier in the year.

They will put their two game winning streak on the line this upcoming Saturday in their last game of the regular season at 2:30 p.m against UC Davis.