The Daily Nexus
Sports
UCSB Knocks Off Mustangs in Biggest Game of Season
March 1, 2019 at 4:32 pm by Brandon Victor 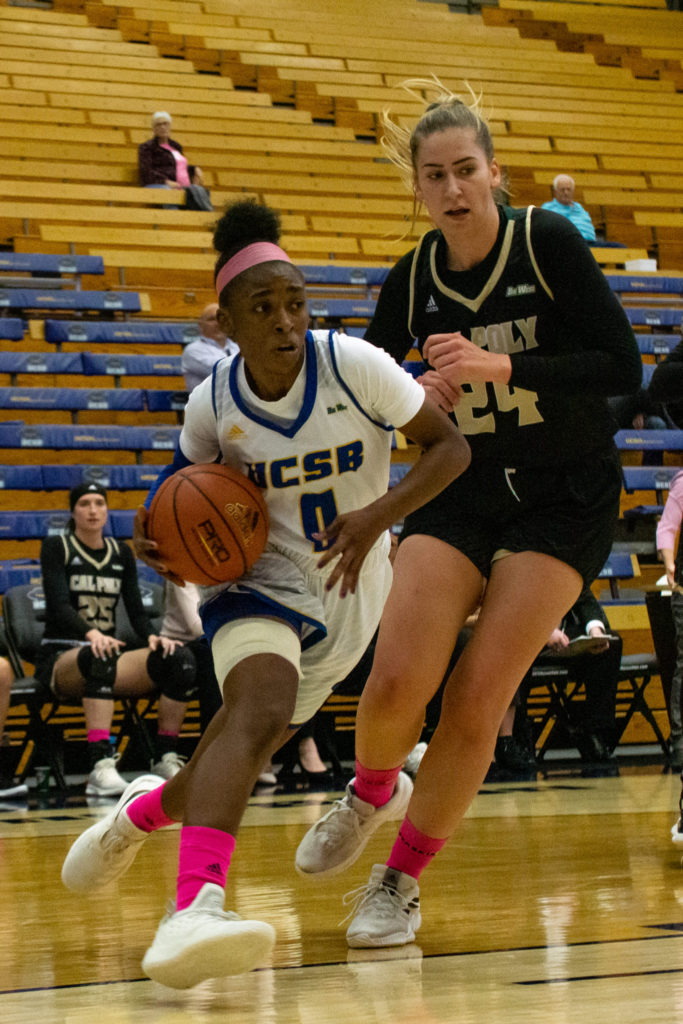 For the UCSB women’s basketball team, any victory over rival Cal Poly is a good victory.

With both teams fighting tooth and nail for the last spot in the Big West tournament, Wednesday’s 44-42 Gaucho win feels even sweeter than usual. In arguably their worst offensive performance of the season, Santa Barbara’s defense did just enough to pull off a potentially season-defining victory.

The Gauchos and the Mustangs entered Wednesday’s game tied in eighth place in the Big West with a 3-10 conference record; with only two more conference games left, both teams were well aware that Wednesday’s game could decide the last spot in the postseason.

The result was a defensive slugfest between two sides that have struggled offensively all season. Offensively, Santa Barbara made only 12 field goals the entire game — tied for its lowest in a game this season. With Cal Poly often employing a full-court press on sophomore point guard Danae Miller, the Mustangs forced the Gauchos to speed up their offense. When junior center Natalia Bruening was forced to sit after picking up her second foul, the Santa Barbara offense became largely stagnant and perimeter-based. At the half, UCSB found themselves with only 18 points.

“In that first half, we really needed to calm down the offense,” Head Coach Bonnie Henrickson said. “We had 11 turnovers in the first half, and we were missing our open looks.”

Despite offensive struggles, Santa Barbara’s defensive intensity remained intact throughout. Against a Mustang side that opted to play three bigs at times, Henrickson opted to use a 2-3 zone, forcing Cal Poly into three pointers; on the game, the Mustangs only hit five of their attempted threes. Even with an anemic offensive output, Santa Barbara only found themselves down three points at the half.

“When we couldn’t score, we still defended,” Henrickson said. “Oftentimes, when a game is that ugly, it’s easy to just give in on [defense] and let it happen.”

By keeping the game close, the Gauchos gave themselves the opportunity to adjust at halftime. Rather than continuing to rely on inconsistent jumpshots, Henrickson implored the team to be more aggressive and force Cal Poly to foul. Although they didn’t make up any ground on the scoreboard in the third quarter, UCSB got four of the five Mustang starters into foul trouble during the quarter, with senior point guard Dye Stahley picking up three fouls in the quarter.

That aggressive approach would prove to pay dividends in the fourth quarter, with sophomore guard Hannah Peterson and junior star center Devin Stanback both fouling out for Cal Poly.

More importantly, Santa Barbara was able to get to the free-throw line at will during the quarter, with the team scoring 10 of their 15 fourth-quarter points from the line. UCSB finally took the lead with 3:14 left in the fourth when Danae Miller made two free-throws, and the team would never relinquish the lead the rest of the way. The Gauchos ended up scoring their last seven points from the charity stripe, including two from junior guard Coco Miller with one minute left that would ultimately prove to be the difference.

Despite their foul trouble, Cal Poly refused to give up; with 1.5 seconds left, the Mustangs found themselves down two and with the ball near half-court. Following a timeout, Cal Poly attempted to inbound the ball to junior Hana Vesela, who was fouled by Danae Miller. With less than a second on the clock, Vesela headed to the line looking to tie the ballgame.

But after missing the first free-throw long, Vesela was forced to miss her second attempt and hope for an offensive rebound. Alicia Roufosse corralled the rebound for the Mustangs but was unable to get a good look off before time ran out. In dramatic fashion, the Gauchos had held on for their most important victory of the season.

“It’s hard to believe that we won with 44 points, but we’ll take any victory we can get,” Henrickson said.

Now, the Gauchos find themselves one game up on Cal Poly in the standings with two games remaining on the schedule. With an away game against first-place UC Davis still left, Santa Barbara will hopeto close out their home schedule with a victory over UC Riverside on Saturday.