The Daily Nexus
Opinion
Brown Privilege: Fighting Against Anti-Blackness in the Latinx Community
February 28, 2019 at 5:10 am by Omar Hernandez 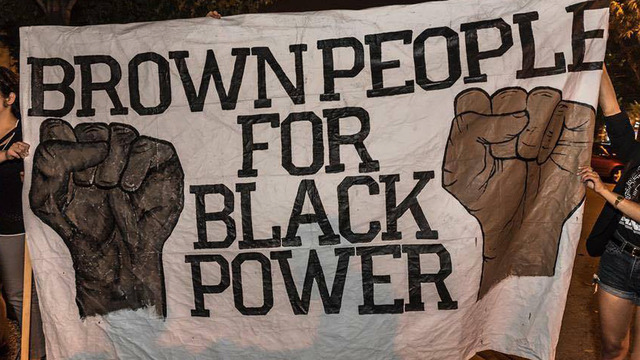 I don’t remember the moment I first realized I was Black.

It might have been when I was five, and my dad explained that the small shrines he had around the house were how he paid respect to the Orishas, the gods our ancestors brought over on the slave ships to Cuba.

It could have been when I broke down crying in class in the fourth grade after recounting how my dad was profiled and berated by the manager at the Piedmont Market over an imaginary stolen pack of cigarettes.

It very well may have been only two years ago when I was sitting on the curb in handcuffs with a couple of friends right down the street from Cal, listening to the Berkeley police officers who detained us brag about how efficient and effective their new handguns were.

I do remember one of the first times I realized I was brown, however.

My friend’s dad had picked us up from school one day after there had been some sort of fight. “It was probably those mayates (a derogatory term for Black people),” he claimed. “They’re always out here causing trouble.”

I was confused by this blatant display of anti-Blackness. The first thoughts that crossed my mind were, “How could he say that in front of me without feeling bad? Doesn’t he know who I am, who my family is? Is he talking about us?”

But I stayed silent. And that’s how it went as I grew older.

Brown and white folks would feel comfortable either saying or doing something anti-Black in front of me, and I stayed silent or my objections were waved away.

I began to wonder how I could be Black when I knew the world didn’t see me that way, when I knew I personally didn’t have to bear the burden of anti-Blackness. I couldn’t reconcile what my dad always told me about my African roots and culture with the tangible privileges and access I got due to my phenotypic brownness.

And so for a long time I was confused.

The breaking point came when my high school organized a walk-out over a racist message posted in the library cheering for the return of the KKK, and I wrote in the school paper about the importance of Black people leading the march and for there to be room for brown Latinx to also be there in solidarity.

For some reason the piece I wrote didn’t quite sit right with me. Solidarity is important, but how could I call for Black people to put in the energy to accommodate and form a coalition with brown folks when most of the anti-Black comments or actions that I experienced were actually from brown Latinx themselves?

Why did a lot of the Mexican or brown Latinx people I know harbor such anti-Black thoughts?

How could I change this?

I decided the best way would be to educate myself.

I read about the Casta system that Spanish colonists enforced all over Latin America, a hierarchical social structure which prized proximity to whiteness with capital and punished Blackness and Indigeneity into servitude.

I learned how media and political power structures in Mexico still reflected anti-Black ideologies to this day. How the conflation of brownness with Latinidad during the nation-building that occured post-colonization in Latin America served to erase the contributions of Black Latinx and Indigenous peoples, and how immigrants coming here maintained these ideals of who is and isn’t Latinx, even in the United States.

My family invited me down to Chiapas and I saw for myself the horrors that Black Central American immigrants had to go through. Many brown and white Mexicans silence and abuse them and the Tzotzil and Tzetzal Indigenous people who live there in the same way that the U.S. abusively deals with undocumented immigrants here.

I learned just how big of a problem internalized anti-Blackness is in places like the Dominican Republic, and how this often manifests in violence toward outwardly Black peoples and cultures such as Haitians.

So I realized that that’s where the problems started, but where were the solutions? Would we just always be bound by these stereotypes and structures set upon us by colonizers?

Just like the problems, history has these solutions as well.

The coalition between the Black Panthers and Zapatistas, as documented in Zapantera Negra by Marc James Leger and Emory Douglas, is one example of how vastly different groups could still strive to find middle ground. Through genuine respect and keeping an open mind, a group of Indigenous revolutionaries from Chiapas and Black community leaders from Oakland were able to learn from each other and help in the fight for sovereignty for oppressed peoples worldwide.

You could also look to independence leaders such as Jose Marti in Cuba, who put his own privilege and status on the line for the liberation of all people, as an example of what white and brown Latinx are going to have to sacrifice to form these coalitions.

Understanding this history opened up the world for me and changed how I perceived myself. I’m not insecure about being mixed, nor do I feel like I have to choose one side of my identity.

I now see myself as a bridge between two worlds.

I get to enjoy the beauty and vibrancy of both my Black and Spanish heritages, but I also have a responsibility to facilitate ideas and solutions between the two as well.

I’ve devoted myself to fighting against anti-Blackness in the Latinx community and also to highlighting the fact that there is no Latinidad without Blackness in the first place.

I hope that other brown folks can take a look at their histories, confront anti-Blackness in their communities and ultimately work toward building solidarity amongst all people of color. Only then will we truly be able to attack the systems of oppression that keep us all down.

Thank you for saying it. Blessings…

Omar: proud to read your piece! I graduated from UCSB and teach there now
I was born in New Orleans and my mom was a Villavaso but we never said we were white, though my mom presented as white. Our family was all shades. I say I’m black to honor my whole family. Junot Diaz was addressing these timely issues. Let’s get coffee soon. I direct Litfest Pasadena and your essay would make a great topic for a panel

Omar thank you for sharing your experience, it is very complex to understand the racism of Latin America, the ideas that the European Conquerors have very efficiently intruded into the mind of the conquered and that sense of rejection and shame for their own ethnic heritage and an obsession to praise and prefer everything that is white and European, I have called it “The Chains of the mind”, and it remains to this day so present in the expressions and way of thinking, even Brown mothers discriminate against their own children within the family … very difficult is to remove… Read more »

i love the quote “There is no Latinidad without Blackness in the first place” yeeesssss!!!!!