The Daily Nexus
Sports
Battle of the Beach: Gauchos Host Long Beach for Senior Night
February 28, 2019 at 5:30 am by Max Kelton 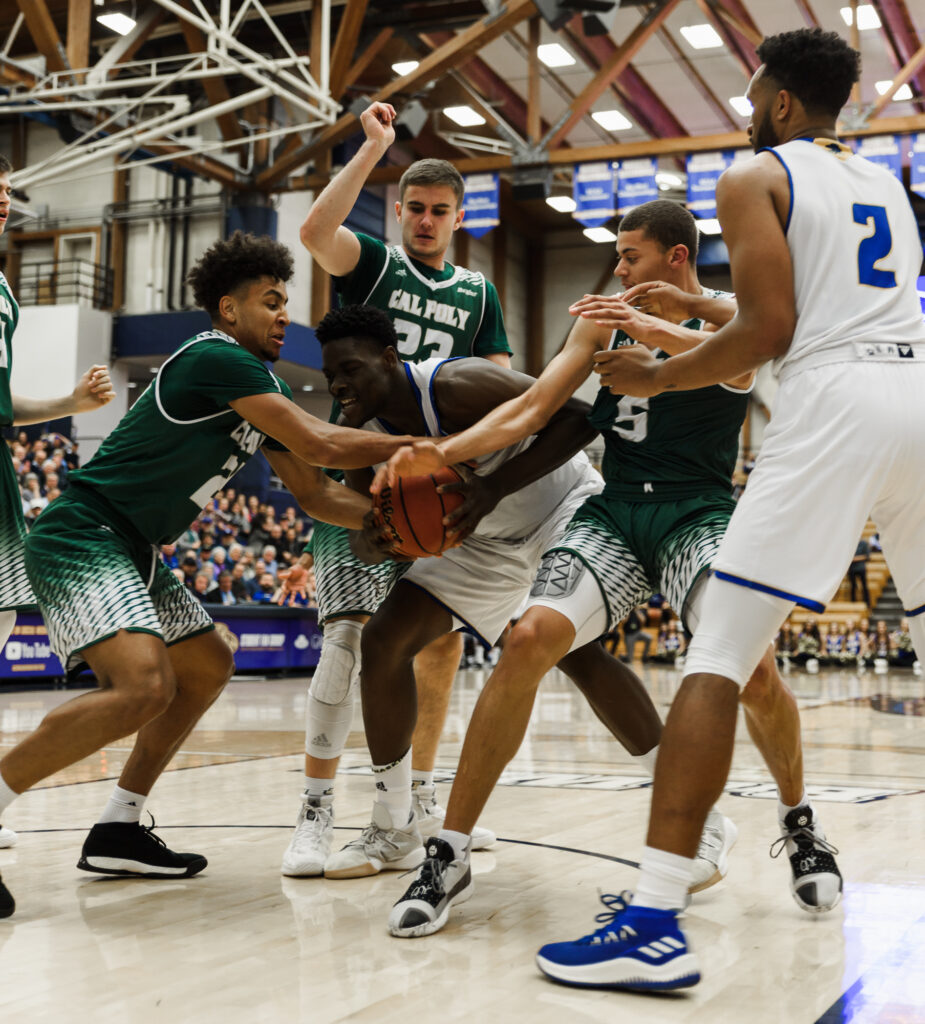 Ami Lakoju trying to secure the ball and put it up. Siavash Ghadiri / Daily Nexus

As the UCSB men’s basketball team inches closer to the Big West Tournament, the Gauchos find themselves in a battle for the second seed in the conference when Long Beach comes to town for Senior Night.

“It’s going to be electric,” said junior forward Andrew Pickles. “It’ll be a bittersweet night for every single one of them, but I’m definitely going to miss playing with them every day.”

The last time these two teams met, the ’Chos stole one in Walter Pyramid with an 82-71 win behind 24 points and a career-high 11 rebounds from graduate guard Ar’mond Davis to propel SB to the win down the stretch, the one of only two televised conference wins that UCSB has delivered on the year.

On top of that freshman sensation Amadou Sow added 14 points on 6-7 shooting with four rebounds despite significant foul trouble early on.

Santa Barbara finds itself placed third in the Big West with a 8-5 conference record, 19-8 overall, with three games remaining in the regular season.

Following a pair of comfortable wins over the then-third-seeded Hawai’i and second place Cal State Fullerton, UCSB is sandwiched in between the two with a single game advantage over Hawai’i who is 7-6 and just one game behind the 9-4 Fullerton Titans.

Davis has accounted for the bulk of UCSB’s scoring this season while averaging 13.4 points and 5.6 rebounds per. Nonetheless, the Gauchos have relied on their depth all season as anyone of the five starters can pop off on a given night.

All five concurrent starters are averaging double-figures while seven different Gauchos have led the team in scoring during a single contest.

As for Beach, it’s been a somewhat disappointing season, although there is one silver-lining. Senior guard Deishaun Booker has carried the Niners with 18.1 points per contest, currently third in the Big West, and has surpassed Leon Wood’s single-season free-throw record, previously set at 211 in 1984, with three regular season games left on their schedule.

Not only has the Las Vegas native made the most single-season free throws in Big West history, but he’s knocked them down with an unprecedented 90.4 percent from the line this season, the top mark in the conference.

Booker has made the most of his senior campaign, despite only five conference wins for Long Beach who currently sits in the seventh spot of the conference standings.

In their last meeting, Booker posted a compelling 25 points, nine rebounds, and seven assists while shooting 12-15 from the stripe.

The 49ers rely on scoring from Booker, redshirt senior Temidayo Yussuf, and redshirt senior guard Bryan Alberts, and although Booker has had a career year, this was not the season that Long Beach stated with all of its top scorers out the door at the end of the year.

To make matters worse, Booker hasn’t been himself from the field as of late. Beach is coming off of two late-game wins against sixth place Northridge and eighth place UC Riverside, but its star senior has shot just 8-29, a disheartening 27 percent from the field in those contests.

With Long Beach coming to town, this is the Gauchos’ last home game of the year as they face three of the bottom four teams in the Big West to close out the regular season.

During handshakes against Long Beach in their last matchup, things got chippy between UCSB and the Niners, so things are expected to get chippy with Beach playing with its season on the line.

If that wasn’t enough to convince you to support, all fans are entered into two raffles with chances to win either a pair of Coachella tickets or a pair of AirPods.

Tip-off is set for 7 p.m. on Thursday evening in the Thunderdome as Santa Barbara hosts Long Beach State in a battle of the beach during the Gauchos 2019 senior night.