The Daily Nexus
Virtual Reality
Separating Artists From Their Art: When Are They #Canceled?
February 25, 2019 at 1:16 pm by Alysha Agarwal

With the historic emergence of the #MeToo movement in 2017 came an unforeseeable consequence: the blowing up of “canceled culture.” Canceled culture as a concept has been around since the start of time, but in the last year has been taken to a whole new level. In the last year, we’ve seen celebrities accused of sexual assault be “canceled” and all their work invalidated and boycotted. But it doesn’t stop there: celebrities that make just about any mistake fall into the same category of “canceled” as these accused celebrities. Although the boycott is sometimes completely justified, people seem to often take it too far or too seriously, not realizing that there is a difference between an artist and their art. 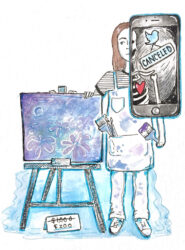 Allow me to drop a mind-blowing fact real quick: celebrities are human too. Humans make mistakes. They learn from them and they grow. I’ve done it, you’ve done it and every celebrity has done it. The only difference is that celebrities have to do it with the whole world watching them, with no room at all to mess up in the slightest without everyone turning on them.

There’s a wide range of actions that can make a celebrity fall victim to the hashtag, and what irks me is that no matter where you fall on this spectrum, you get sentenced to #canceled for life.

Last year, it was announced that Kevin Hart was going to host the 2019 Academy Award ceremony. However, as soon as this was announced, old homophobic tweets he had posted between 2009 and 2011 resurfaced. Twitter blew up in outrage at these rediscovered tweets, and Hart was #canceled as quickly as he was appointed to host. His past tweets caused so much controversy that Hart withdrew from hosting the award show.

However, as Hart explained in his interview with Ellen DeGeneres, he had already apologized for these old tweets and had been trying to learn from his mistakes and move forward with his life. Twitter didn’t take a second to breathe and do background research before exploding on Hart for his mistakes. This is where the debate of whether or not art should be viewed as separate from the artist comes in: should Kevin Hart be allowed to perform given his problematic past?Before the internet fad of canceling celebrities at the snap of a finger, it was much easier for consumers to draw a line between an artist and their art. In modern society, however, that line is blurred and sometimes nonexistent. Picasso was misogynistic, yet his art is still considered some of the best in the world. William Golding was an attempted rapist, but his book Lord of the Flies is still taught in high schools across the nation. J.D. Salinger was a pedophile, yet he is considered one of the greatest American authors of all time, and his book The Catcher in the Rye is one of the most widely-read novels.

Recently, consumers of entertainment have decided to take more responsibility for holding celebrities accountable for their actions, but it has gotten to the point where celebrities can’t take a single step out of place without risking everything. I’m in no way condoning the previously mentioned artists’ behavior; I’m just stating that these artists are different from their art and their work, and that their personalities should be considered separately. Supporting an artist’s work is not equivalent to supporting their actions, to a certain extent.

This line gets a little hazy with artists who haven’t just made small mistakes. On one end of the spectrum of #canceled celebrities are celebrities like Kevin Hart and on the other end are celebrities like Tekashi 6ix9ine, R. Kelly and Bill Cosby. For the latter artists mentioned, it becomes harder to support their work without feeling like you’re condoning their actions. Although there is an extreme difference between Kevin Hart’s eight-year-old homophobic tweets and Bill Cosby’s multiple sexual assault charges, both have fallen victim to canceled culture. Making the separation between an artist and their art was definitely easier before the Internet, and although I believe it’s still important, it becomes more difficult with celebrities on the extreme end of the spectrum.

There’s a wide range of actions that can make a celebrity fall victim to the hashtag, and what irks me is that no matter where you fall on this spectrum, you get sentenced to #canceled for life.

I think a good middle ground that society can take on this issue is to be more accepting and lenient towards work from artists who have made active efforts to learn from their mistakes and move forward. Let me be clear: this doesn’t apply to the Bill Cosbys or R. Kellys of the world, but it does apply to the Kevin Harts. Kevin Hart has made a public and conscious effort to right his wrongs and move on with his life, and we should not judge his comedy in light of his personal mistakes. We’re putting too much pressure on ourselves as consumers to evaluate what should and shouldn’t be appreciated due to the actions of their creators. Instead, we should appreciate art for what it is, rather than blaming ourselves for “supporting” an artist’s slightly problematic past.

Alysha Agarwal urges people to discern between an artist’s actions and their work.

Maybe free speech is a good thing? how dumb are these college liberals jesus h christ

“cancelled” is spelled wrong in every use in this article. I know this is a school newspaper, but also, it’s college and you guys have an editor? how did no one catch this