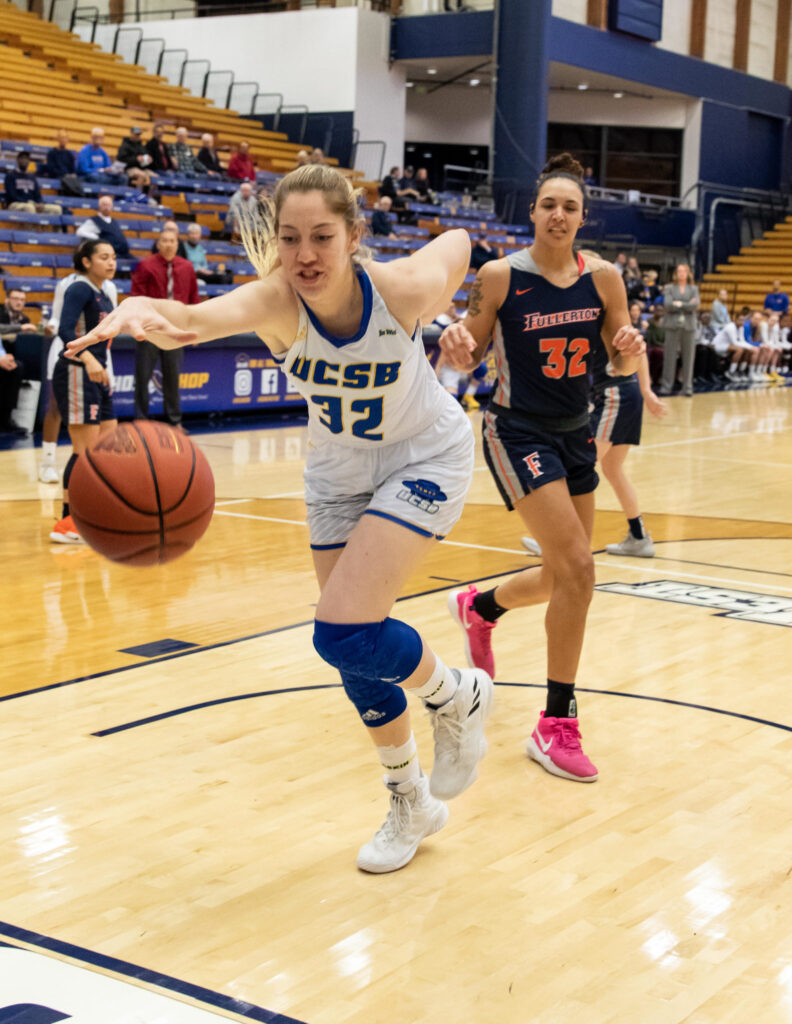 Following their biggest win of the season over UC Irvine, the UCSB women’s basketball team will look to build on its newfound momentum when it takes on Cal State Fullerton and Long Beach State this week.

For the first time all season, the Gauchos were firing on all cylinders in their 71-52 victory over the 16-6 Anteaters. Led by 21 points from junior guard Coco Miller and 20 points from sophomore point guard Danae Miller — in addition to 19 points from the bench — Santa Barbara was able to knock off the second-place squad.

With the victory, the Gauchos leapfrogged Cal Poly into eighth place in the conference. If the postseason started today, UCSB would be the final team in the Big West tournament, while Cal Poly would fail to qualify.

With five games left, however, there is more work to be done starting this Thursday when the Gauchos travel to Fullerton.

After starting conference play 3-1, the Titans have dropped their last six games, leaving them in seventh place in the conference.

With a victory, UCSB would jump Fullerton in the conference, making the matchup crucial to both teams’ postseason hopes.

Much of Fullerton’s conference struggles have stemmed from their at-times anemic offense; after averaging more than 67 points in non-conference play, the Titans have merely scored 58 points a game during conference play.

In that first matchup, Smith dominated for the Titans, scoring 18 points and also grabbing ten boards.

If the Gauchos hope to beat Fullerton on their home court, they will need continued production from their backcourt. In that first matchup, Coco Miller struggled heavily, scoring only six points on 2-14 shooting.

Santa Barbara will also need their bench to step up to keep pace with the Titans.

While junior Tal Sahar didn’t play in the first matchups between these teams, the Gauchos merely scored nine points off the bench. With Sahar, the Gauchos’ best playmaker off the bench, back in the fold, look for UCSB to be more explosive with the reserve unit.

The Gauchos will have a quick turnaround after their last match, with their game at Long Beach State on Saturday at 4 p.m.

As another team that has struggled for much of conference play, the 49ers are only one game up on UCSB in the conference standings, sitting in sixth place with a 4-7 conference record.

LBSU will be looking for revenge on Saturday after Santa Barbara knocked them off the first time around, 60-54.

The Beach has also struggled offensively this season, with the team averaging fewer than 57 points per game.

A major component of UCSB’s success in the first matchup between these teams against the 49ers was shutting down sophomore guard Shanaijah Davison, who leads the team with 14 points per game. Santa Barbara’s defense frustrated Davison all throughout the game, with the star guard scoring merely seven points while turning the ball over six times before ultimately fouling out.

With Long Beach lacking size in the paint, look for the Gauchos to feed junior center Natalia Bruening heavily.

On the season, LBSU has been outrebounded by an average of almost 11 rebounds per game — a huge factor behind why the team has struggled so much in conference play.

While Bruening has often grappled with foul trouble this season, she has proven to be an efficient rebounder when on the floor, averaging nearly six rebounds per game in only 24 minutes per game.

Against the two teams directly above them in the standings, Santa Barbara can make up serious ground this week in conference play.

While both games will be on the road — where Santa Barbara has only won one game all season  — the Gauchos will look to ride their momentum from their huge upset win against UC Irvine.

UCSB will take on Cal State Fullerton on Thursday at 5 p.m. before traveling to Long Beach to take on LBSU on Saturday at 4 p.m.