As an avid eavesdropper, catching tidbits of conversation as I eat my lunch might just be my favorite form of entertainment. I tune into people’s chit-chat like my grandpa tunes into “Judge Judy” at 6 p.m. Sometimes, a stranger’s funny anecdote from her Friday night is enough to make my day.

Other times, these tidbits of conversation are jarring reminders that people still use “retarded” as a synonym for “stupid.”

This was my reality last week as I ate my salad in Carillo, acutely aware of a stranger’s ignorance by his usage of a single word. His carelessness made me cringe, as hearing the word always does, and then I started to think about why I felt the way I did.

I attribute my immediate loss of respect for anyone who flings around the “R” word to growing up with my 17-year-old brother Nicolas, who has Asperger’s syndrome. Asperger’s is often characterized by obsessive interests, challenges with reading social cues and delayed information processing. It is considered a type of high-functioning autism, so it falls on the less-severe end of the spectrum. Realizing I’ve never actually spoken at length with my brother about how he perceives derogatory language, I called him last Saturday morning.

When I asked my brother how he feels when he hears the “R” word, he replied, “Asperger’s doesn’t make someone stupid. You can be very, very smart and have a learning disability.” Nicolas also noted that some of his strengths can be attributed to his diagnosis. “I’m very detail-oriented. That’s a big part of Asperger’s.” 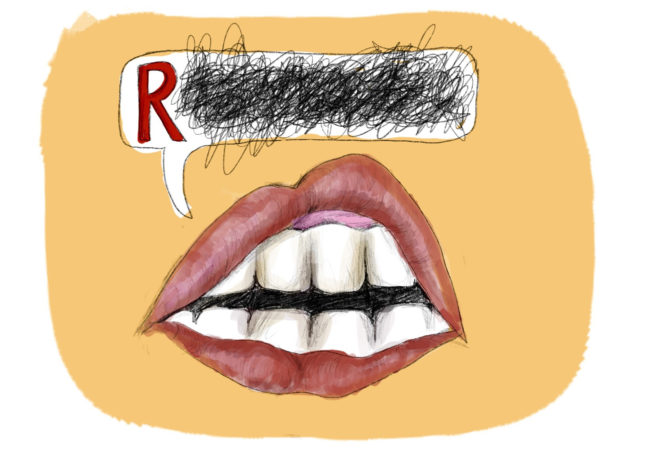 Nicolas was being humble about his talents. He is an avid reader, an excellent writer and one of the funniest people I know. Intelligence is certainly not only a neurotypical trait, and to equate autism with stupidity is to dismiss the talents of every person on the spectrum.

I asked Nicolas what he wished other people understood about having a learning disability, hoping he would provide a perspective that I couldn’t. “People should just try to understand,” he said. I pried for a deeper answer, but after taking a moment to think, I realized what he meant. My question was unfair. People don’t have to relate to the experience of a learning disability to be respectful. Showing empathy is easy, but using the “R” word demonstrates a refusal to understand.

Luckily, my brother has learned to choose his friends wisely. He told me that they did not make him feel alienated. They treat him with kindness, and they never use the “R” word. Not once. None of them know about his diagnosis, and Nicolas does not believe it is important that they know. “It doesn’t matter. You should treat everyone with the same respect,” he said.

Socially, Nicolas feels no different from his peers, because his close friends are respectful. He avoids people who use the “R” word, because he says this language makes him feel different.

“People don’t say it very much anymore, but I still hear it,” he said.

Showing empathy is easy, but using the “R” word demonstrates a refusal to understand.

I still hear it, too, on a college campus — a space supposedly rife with social awareness. I doubt very much that my fellow Gauchos wish to spread hostility. That being said, regardless of intent, casual usage of the “R” word is hate speech.

For those of you who are still using the “R” word in 2019, you are alienating people — on and off the spectrum — who associate the word with ignorance and intolerance. You’re also missing out on dozens of wonderful synonyms for stupid! Why use hate speech when you can sprinkle words like dense, vacuous, half-witted or obtuse into daily conversation?

So, for all the times I have clammed up after hearing the word from a stranger at Carillo, an ex-boyfriend, a girl at the bus stop and countless high school jocks, I hope to raise at least one conversation about the implications of our language. Words are powerful, and though it is possible to attack someone’s very existence in a couple syllables, kindness is just as easy. Be courteous; you never know who might be trying to enjoy their lunch in the booth behind you.

Alyssa Long implores Gauchos to look beyond the “R” word and to embrace people of all abilities.

Would you ever refer to your brother or anyone else with any impairment as a “retard”? Of course not, as that would be incredibly mean, as well as wrong. So, what is the word “retard” being reserved for? I use it to refer to things I find completely absurd.

Example: I believe someone saying “regardless of intent, casual usage of the “R” word is hate speech” is absolutely retarded. Sorry.

Just use the word absurd then. The “R” word is far outdated and prejorative. Using it is harmful to the people who work every day to combat the nagative stereotypes of autism. You ask what the word is reserved for, but not for whom, and it’s certainly not your word to use. Follow the author’s advice and expand your vocabulary.
Example: I believe the author of this comment is ignorant and half-witted. Not sorry.

You are correct. It’s not my word, but guess what: it’s not YOUR word either. Words aren’t “real” objects capable of being owned. I get to say anything I want, when I want to say it, not matter how some may deem it “offensive” or “hate speech.” Maybe the word “dim-witted” is offensive to me, could I demand that you stop using it? I can request that you not use it around my presence, but I can’t force you to stop entirely. My advice to you and the author of this article to grow a thicker skin, people are going… Read more »

Hm yeah no your argument about how “dim-witted” can be offensive to ONLY you is a slippery slope argument…at that point you can just say any word is off-limits. The reason the “R” word is highly offensive is due to the stigma around disabilities and its context in society today. Of course you have the right to say whatever you want, but just repeating that you have a right to say something doesn’t justify it in any way. But I suppose if you don’t care about morals then you wouldn’t care about the meaning of your words anyway.