The Daily Nexus
Opinion
A Field Guide to Introversion
February 21, 2019 at 3:58 pm by Jordan Curiel

Hi. I’m an introvert. No, I’m not sitting alone in the corner of a musty bookstore wearing a sweater covered in cat hair and peering at you like a deer in headlights from behind two-inch thick coke-bottle glasses. Nope, not locked in my room with the shades drawn and emo music blasting through the headphones under my hood while I hate the world and everything in it, either. Yes, I’m still sure I’m an introvert. Let me tell you how I know. 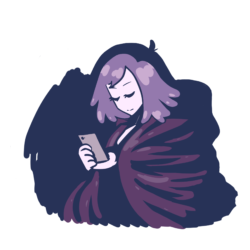 My mouth doesn’t run non-stop, and if you approach me you may only get a weak smile in return. Public attention rattles me and encounters with strangers are a terror. I’m socially anxious, I’m shy and I’m weird — that is all true. But plenty of people are all of those things and still constantly want, practically need, to surround themselves with human interaction to feel whole and happy. I feel no such draw. Throw as many “wallflowers” and “shrinking violets” and other odd floral metaphors out there as you’d like, but being me means that even in the most comfortable of company I will still eventually crave my precious time alone.

Introverts aren’t inherently skittish little creatures who experience full-body paralysis upon eye contact. The distinction lies in how the mind wears out and is subsequently recharged. If an extrovert draws on other people’s energy to elevate their own, introverts find their own energy receding as it’s expended on those around them for too long (which by no means is to say that they don’t like spending time with you). Where an extrovert can fall into loneliness, introverts often find serenity. In the absence of company introverts can replenish social abilities, getting ready and even excited to go back out into the world, but the alone part needs to happen first.

Introversion versus extroversion isn’t a stereotype or a fashion sense. There’s no neon sign hanging above your head that tells people which personality persuasion you belong to — unless you count shirts emblazoned with Greek letters as the uniform of social butterflies (which you shouldn’t). Socializing can be as draining mentally as exercise is physically. In a party-heavy setting like Isla Vista, that means there’s a limit to how many consecutive weekend excursions I can handle. If one more person pitifully tells me to “have a fun night-in, sweetie,” as they trapse out the door on their way to Sigma Alpha Dillhole or whereverthefuck, I’m gonna throw up.

Now, let me say this once: Please do not mistake the desire to be alone with an attempt to blow you off.

The sad fact that our brand of homeostasis often gets passed off as avoidance is a glaringly obvious reason why introverted people struggle to enter and maintain relationships. Worrying about the choice between a sound mental state and a friendship is way more stress than anyone needs. Few things are more anxiety-inducing than someone misconstruing the fact that you don’t want to spend every free minute of your day with them, and becoming offended. I am tired of jumping into damage control mode every time I’m struck with the inclination to spend a night in my own company.

You may not understand the things I do, and that is simply because human beings are wired differently. Just because you laid in bed watching Netflix last Sunday doesn’t mean you immediately relate to every loaded interaction or social turmoil that introversion imposes. Even the whole introvert construct presents itself differently. Recharging by being alone with your laptop, your headphones, a book, or taking a nap, studying, going for a run — everything is valid. The key to introverted behaviors lies in the environment that’s most often favored. Being alone.

You may not understand the things I do, and that is simply because human beings are wired differently. Just because you laid in bed watching Netflix last Sunday doesn’t mean you immediately relate to every loaded interaction or social turmoil that introversion imposes.

Not everything turns into sunshine and daisies as soon as everyone goes away. There’s the freak-factor, imposed by a social connectivity-driven world in which avoiding interaction by choice attaches the stigma of “weird loner girl/guy” to your back. There’s the FOMO, which the college party culture constantly reminds you isn’t just a stupid acronym because everyone and their mother hung out at that dayger last weekend based on the over-saturated fake-candids all over your Instagram feed. And, to the delight of therapists everywhere, there’s the inevitable bottling-up of every emotion you have.

I know I tend to prefer popping these bottles in the comfort of isolation, to avoid accidentally spraying other people in the face with the pressurized emotions that come shooting out. This is paramount to most introverts. I’m not knocking the therapeutic aspect of voicing your problems to an appropriate audience, but there are some people who just tackle the big stuff better on their own. I’ve told you, now let me show you.

Last summer I faced the biggest trauma of my 20 years on this earth when I almost lost someone more dear to me than life. With my usual resolve exponentially weakened, some friends could persuade me into attending a party I was by no means ready to handle. Festivities in full swing, music blaring, red cup in hand, I lost my shit and ran for the back door. The person who followed me outside and found me hyperventilating in the bushes was someone I trusted — and I don’t use that word lightly. So I spilled my guts, gave every sordid detail and cried with abandon.

We were close before then, and now it’s uncomfortable to eye contact. That sucks.

I have trouble talking to them because they know too much about me and about what I want no one to see, and I hate that my innate fear of being exposed won’t even let me appreciate the extraordinary kindness they treated me with.

Now that I’ve thoroughly bummed out all my readers, I’ll make my point: when someone like this wants to be alone, let them. I can’t speak for all the introverted souls out there, but what I do know is that it’s not being depressed. It’s not an emo phase. It’s not because they don’t like you (well, no promises). Some of us are just a little introverted, and quite comfortable staying inside our shells, thank you very much.

Jordan Curiel promises that she doesn’t hate you, she’s just shy and has resting bitch face.

This was a really good read, and personally quite relatable!