The Daily Nexus
News
Overheard At UCSB Commemorates First Anniversary
February 14, 2019 at 12:04 am by Sean Crommelin

In just one year, the Facebook group “Overheard at UCSB” has grown to over 15 thousand members.

“I just want to know how it’s Week Six again,” a relatable Gaucho on the fourth floor of the lib said.

“You can’t treat them like people. Don’t even make eye contact,” a Gaucho who is tired of CALPIRG asking them to save the bees said.

The Facebook page has become a go-to platform for students attending UC Santa Barbara, a place for them to put a spotlight on fellow Gauchos expressing their frustrations, failures, joys and triumphs that define the college experience, but also the little things that make living in I.V. the unique experience that it is. It has become a part of the campus’s culture. 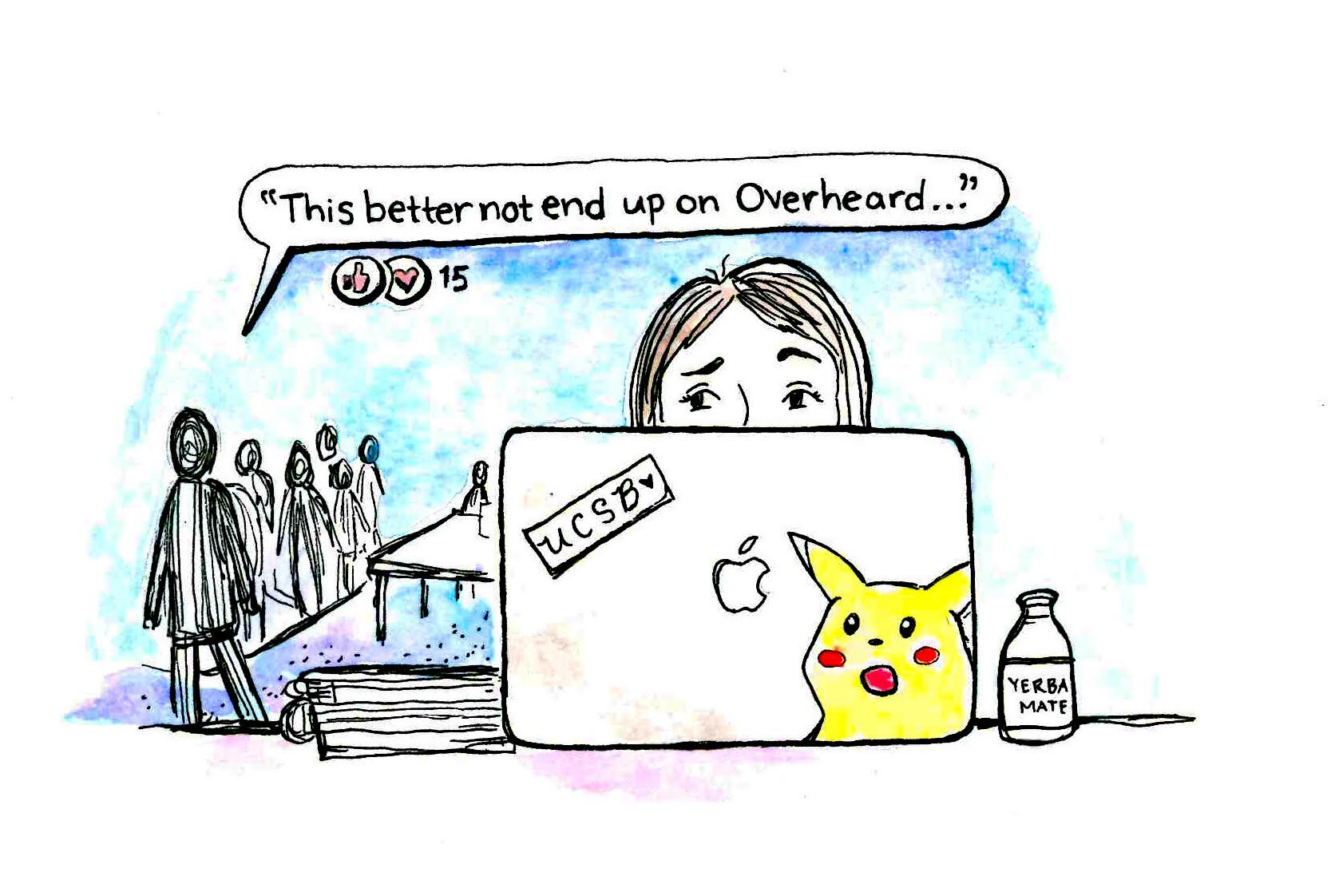 As the page celebrated its one-year anniversary, the founders and current administrators of the group took time to reflect on how large the group has become and how an active community has sprouted within it.

“It started with the cultural clubs, which were comfortable with us, and [they] started posting. Then once it passed a certain size, other people were like, ‘Oh, this is for everyone,’ and they felt more welcome to post,” Truong said.

From the start, the page grew quickly.

“It didn’t take long at all; we advertised it immediately on the other memes page, so everyone just came over,” Vu said.

“It was like a snowball effect; even people from other schools wanted to join,” Ocampo added.

The admins found that certain periods of the quarter, like midterm season, saw peaks in activity   because a lot of people were going through the same hardships that come with being a UCSB student.

“More people are likely to complain about the same thing, and because of that people are able to relate to [Overheard at UCSB] more, which contributes to the popularity,” Chen said.

Overheard at UCSB quickly adopted a unique flavor in line with the campus itself and the community of I.V.

“Each Overheard page has its own culture that kind of, like, reflects the culture of the college … at UCSB it’s kind of like a bit [of a] party school. You hear a lot of really inappropriate pieces of conversation,” Chen said.

While Overheard at UCSB has grown organically with its community, the admins have had to exercise judgment in moderating content from certain users who have tried to hijack the page to sell products or simply commandeer the group.

“There are rules in place for a reason. Sometimes people try to make it their own page … it’s not ‘Overheard from Someone Else,’ it’s Overheard at UCSB, and we want it to be about the campus, not a specific person,” Ocampo said.

“There was a person on Overheard who posted multiple times a day, so we checked him out, and he doesn’t even go here. He, like, looked up facts to make the posts more relatable, and then he tried to sell them on apparel. We’ve blocked him twice,” Vu said.

Still, the admins believe that the page has flowered into a thriving community.

“I think, as long as people are willing to share their experiences, Overheard at UCSB has a place,” Chen said.

Sean Crommelin is a copy editor at the Daily Nexus and can be reached at news@dailynexus.com.