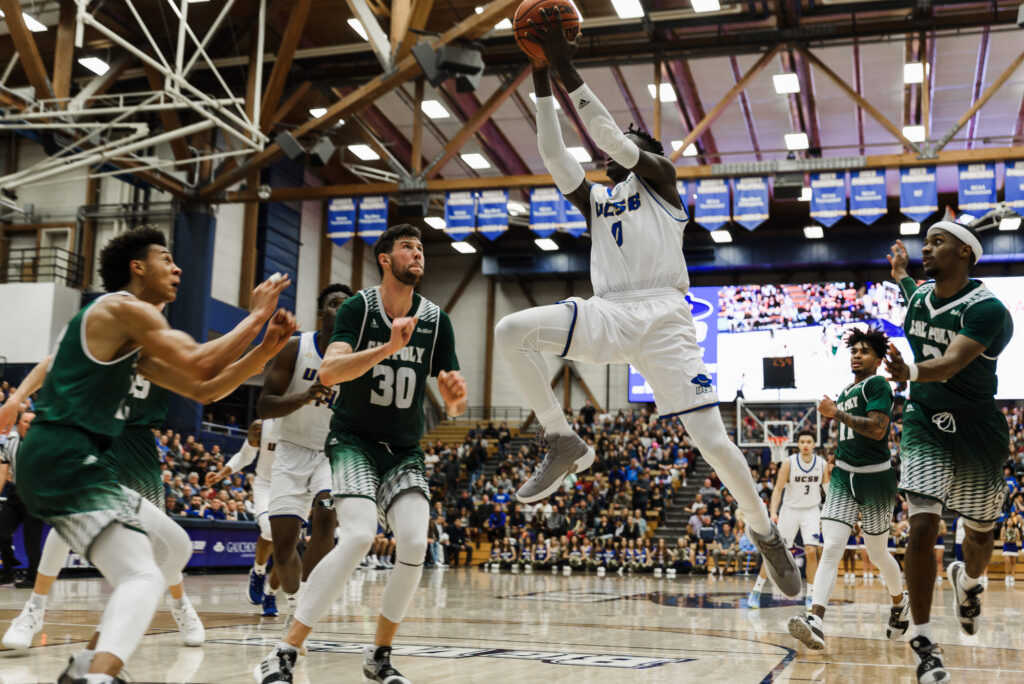 Late turnovers led to opponents’ capitalizing on these mistakes, as the Gauchos fall 57-61 against UC Davis during weekend conference play.

With the loss, the Gauchos now fall just under the .750 win percentage mark. On the season, UCSB currently stands at an overall record of 17-6 after splitting last week’s Big West doubleheader, which included a 70-64 home victory Wednesday night against CSUN. Following these results, the Gauchos still remain in second place of Big West league standings, with a conference record of 6-3. Meanwhile, fifth-place CSUN and sixth-place UC Davis continue to feature as middle-of-the-table teams with each side at a 4-4 conference record.

Early into Saturday night’s match, everything seemed to be going the Gauchos’ way. At the 12:12 mark, a mid-range jump shot from freshman guard Sékou Touré put UCSB up by seven points. Shortly after, UC Davis would respond with a three-pointer of its own, which brought the score to 8-12. Following an exchange of two-point jumpers, junior guard Max Heidegger brought the difference back to seven after draining it from behind the arc.

About halfway through the first half of play, things began to go more in favor of the Aggies. A made layup by UC Davis’s Stefan Gonzalez, which included a free throw at the foul line, was all it took for the Aggies to bring the score all level once more at 17-17. Each team swapped the lead several times before the score was all tied again, at 25-25, by the 1:57 mark.

By this point, the visitors controlled all the momentum and sought to find a comfortable lead entering halftime. A made layup in the final seconds of play, by TJ Shorts II, earned UC Davis that very lead as the Aggies held a 31-25 advantage over the Gauchos.

The halftime talk and coaching readjustments must have helped the Gaucho players plenty, as the team began the second half of play with a three-point jumper from sophomore guard JaQuori McLaughlin. By the 16:00 mark, the hosts had only needed four minutes until they found the lead once more at 33-32.

Unfortunately for the Gauchos, the Aggies did their best to halt any more momentum past this. A couple more lead changes were experienced in the following minutes, and by the 12:45 mark the score was all level at 36-36, then at 38-38, and again at 43-43. At this point the game was seemingly unpredictable as neither team was truly able to pull away.

With less than three minutes left in the final half of play, a two-point jumper from Heidegger tied the game for the Gauchos at 53-53. In response, UC Davis’s Joe Mooney scored a devastating deep three that essentially would keep the Gauchos at bay for the remainder of the game. A clutch pair of free throws from UCSB’s Devearl Ramsey, which brought the score to 57-60, still kept the team in the game for the final seconds of play. However, needing either a steal or a foul on the game’s final possession ultimately resulted in free throws for the Aggies. The visitors went on to take this upset victory by a score of 61-57.

Stat leaders for the Gauchos were Heidegger and freshman forward Amadou Sow. Heidegger led his side in scoring, with 11 points, and had a game-leading five assists on the night. As for Sow, he finished with a game-leading seven rebounds to go along with his stat line of eight points in 22 minutes.