With the arrival of Girl Scout cookies on UC Santa Barbara’s campus, hungry students are gravitating toward colorful boxes piled on make-shift stands that are sprawled throughout campus.

Across the nation, Girls Scouts are selling their treats on street corners, busy storefronts and college campuses. They recently set up shop at UCSB in late January and will be selling through the next four to six weeks. 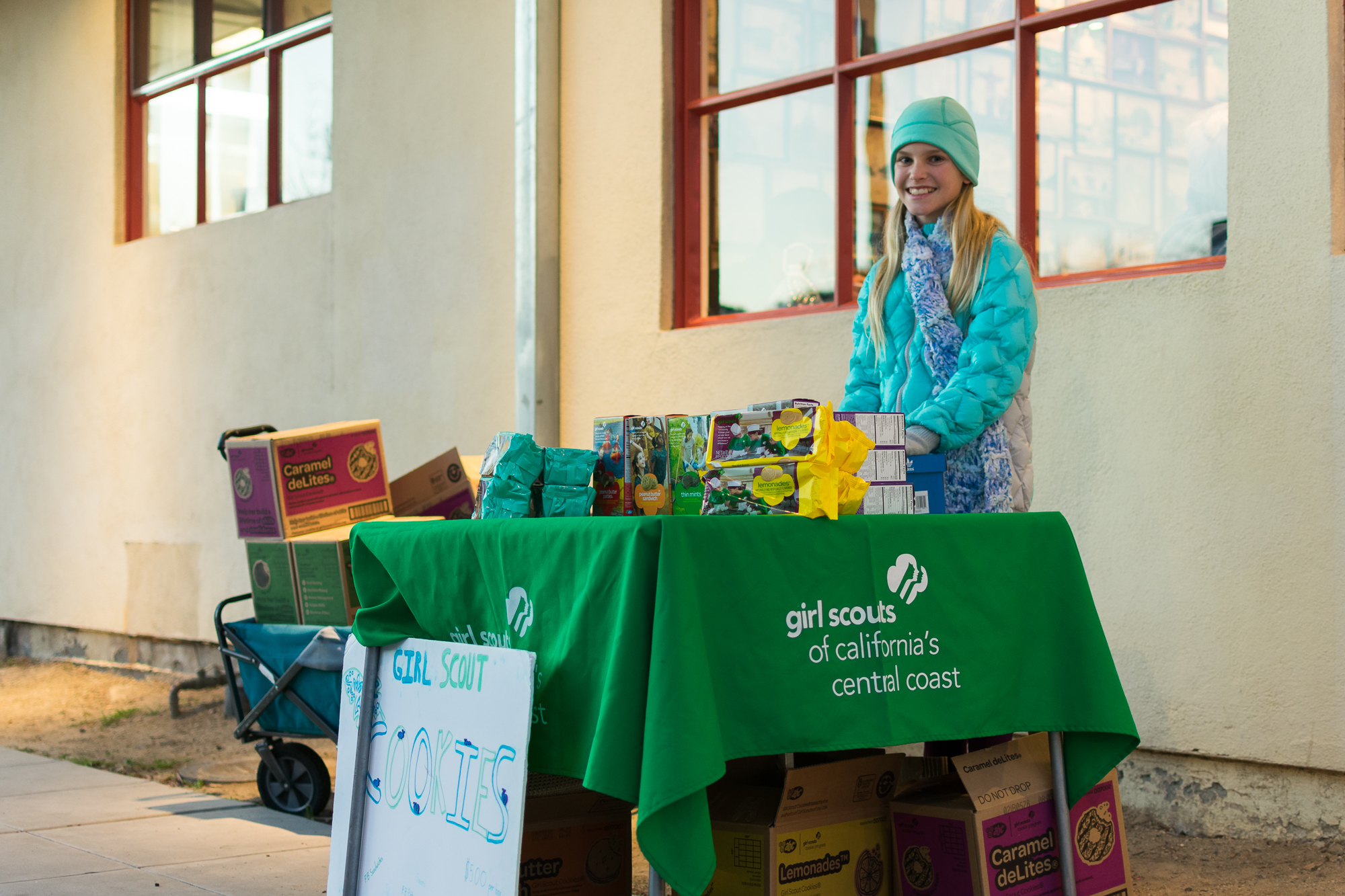 The Girl Scout Cookie Program is the largest girl-led entrepreneurial program worldwide, according to the Girl Scout website.

Cookie profits go toward leadership programs and “supporting girls” success but also the “success of [the] community,” according to the Girl Scout website. The cookie program is also the country’s largest financial investment in girls annually.

This year, Girl Scouts sell cookies across campus in prime locations near the University Center, Pardall Tunnel and Davidson Library.

Skyler, a local 13-year-old, set her stand in front of the library last Monday night. She said she has been selling cookies on the UCSB campus for the past two years.

“There are a lot of really enthusiastic people and it’s always a treat to be here,” Skyler said.

Skyler experimented selling cookies at a variety of locations on campus and decided on the location based on where she found the most people.

“As it gets later and people start to go to bed, I migrate over there,” Skyler said as she pointed toward the freshmen Chi-5 dorms.

Thin Mints, Caramel Delights and Peanut Butter Patties are especially popular this year, according to Skyler. This year, Skyler’s goal is to sell 3,000 boxes of cookies.

Lilly Rodriguez, the sister of two local Girl Scouts, posted on the UCSB Free & For Sale Facebook page offering pre-orders for cookies. Within a day, she received over 50 messages.

“I enjoy helping my sisters out so they can go on trips with their troop. My older sister is planning on going to San Francisco and my little sister will use the money for activities,” Rodriguez said.

Many Girl Scouts are now accepting payment through Venmo, a mobile payment app, in an effort to increase sales to college students who may not carry cash.

Sixth grader Olivia F. is excited by the increased profits from the usage of Venmo.

“We love Venmo. We took over $1,000 on it at our UCSB cookie booth. Not all troops use it but we think it is a must,” Olivia said.

“[Students] get very excited when they hear us yell ‘We take Venmo.’”

Olivia is aiming to sell 500 boxes this year, enticed by the pair of narwhal slippers that she would win as a prize. She is optimistic about where the profits from this year’s sales will go.

“We are using some of the money to go to Kaleidoscope, a large Girl Scout camping trip at Live Oak Campground. We haven’t voted how to spend the rest but last year we did horseback riding,” Farley said.

UCSB students welcome the Girl Scouts to campus, as they bring back childhood memories and offer delicious cookies.

“I was a Girl Scout for many years, and it reminds me of my days of selling cookies,” Anika Ahlstro, first-year communication and art history major, said.

“The cookies bring me happiness whenever I eat them, especially Thin Mints and Tagalongs.”

Ashley Rusch and Amira Garewal are staff writers at the Daily Nexus and can be reached at news@dailynexus.com

Geez, dude, chill out. It is only once a year.

Now THIS is news