The Daily Nexus
Sports
Gauchos Return Home, Look To Get Season Back on Track
February 7, 2019 at 5:20 am by Brandon Victor 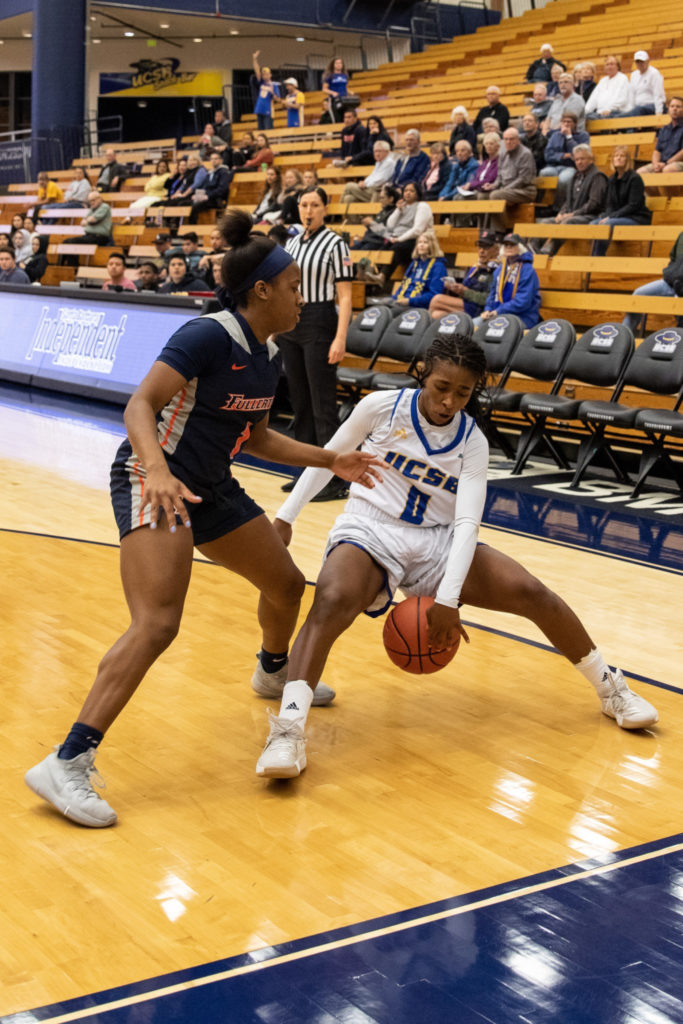 After a 1-6 start to conference play, the UCSB women’s basketball team are in a battle to qualify for the Big West conference tournament. With only the top eight teams in the conference eligible for postseason play, the Gauchos currently find themselves on the outside looking in.

In their last game against UC Riverside — a 73-60 loss — the Gauchos once again struggled from the field, hitting only 33 percent of their shots on the night while allowing the Highlanders to shoot almost 50 percent. As has been the case all season, Santa Barbara just can’t seem to find a rhythm on the offensive end. While the bench stepped up and scored 31 points on Saturday, UCSB’s starters merely made 10 of their 41 field goals on the night. So far in conference play, the Gauchos have yet to have a game where their whole offense has been firing on all cylinders.

Unfortunately for Santa Barbara, the sledding won’t get any easier this week when UC Davis and Cal State Northridge come to town.

The Aggies start the week with sole possession of first place in the conference after blowing out both Northridge and Long Beach State last week. With six straight wins and a 15-6 overall record, Davis is the last opponent a struggling Gauchos side wants to see on the schedule.

Davis’ dominant defense has been the key to their recent run of success; during their six game win streak, the Aggies have yet to allow more than 57 points in a game. Perhaps most impressively, UC Davis held an offensive-minded Fullerton squad to only 39 points two weeks ago.

Offensively, everything Davis does runs through redshirt senior forward Morgan Bertsch. One of the most talented individual scorers in the conference, Bertsch currently ranks fourth in the entire country and leads the Big West with 23.6 ppg. Perhaps just as impressively, Bertsch has incredibly efficient shooting splits, shooting over 50 percent from the floor, 57 percent from deep and 83 percent from the free throw line.The 6’4 forward also contributes on the defensive end, leading Davis with almost 1.5 blocks per game and chipping in 5.7 rebounds per game.

While the Gauchos have played relatively decent team defense all year — giving up only 67 points per game to opponents — they don’t have a lockdown defender that will be able to take Bertsch. Junior center Natalia Bruening won’t be quick enough to stop the shifty forward, while the rest of the team won’t be big enough to get in her way. In lieu of that, look for Head Coach Bonnie Henrickson to double team whenever possible and force the other Aggies to step up.

Outside of Bertsch, Davis relies on senior point guard Kourtney Eaton to facilitate the offense. The savvy guard is averaging 7.2 ppg, but leads the team with almost five assists per game and a 2:1 assist to turnover ratio.

Things will get slightly easier for UCSB on Saturday when Cal State Northridge comes to the Thunderdome. CSUN currently sits in third place in the conference, although they only sport an 11-11 overall record on the season. In the first conference matchup between these teams earlier this season, UCSB fell behind big early, but made a late run to come within eight of Northridge.

Similarly to the Aggies, Northridge relies on its big for the bulk of its production. Stud senior center Channon Fluker — the conference player of the year last season — has produced another outstanding season for the Matadors, leading the team with 15.2 ppg and a resounding 10.8 rebounds per game. In the first matchup between these teams, Fluker proved to be the difference, grabbing a game-high 14 rebounds to go along with 17 points.

Outside of Fluker, however, the Matador’s offensive has been ineffective, with the team only averaging 60 points per game on the season. Like Santa Barbara, Northridge struggles to stretch the floor, shooting less than 30 percent from beyond the arc.

Unfortunately, none of that will matter if Santa Barbara can’t get their shots to fall on Saturday. With UCSB shooting 35 percent from the field and 25 percent from deep, a strong defensive effort can only go so far.

Junior guard Coco Miller — who leads the Gauchos with 13.5 ppg — has been in a shooting slump of late, making only six of her last 42 field goal attempts. Without Miller stretching the floor, defenses have been able to key in on Bruening, with Riverside keeping her scoreless in her 14 minutes on the floor.

In Big West play, anything is possible, especially at home. Still, UCSB will need to be hitting their shots this week if they hope to crawl out of last place in the conference.