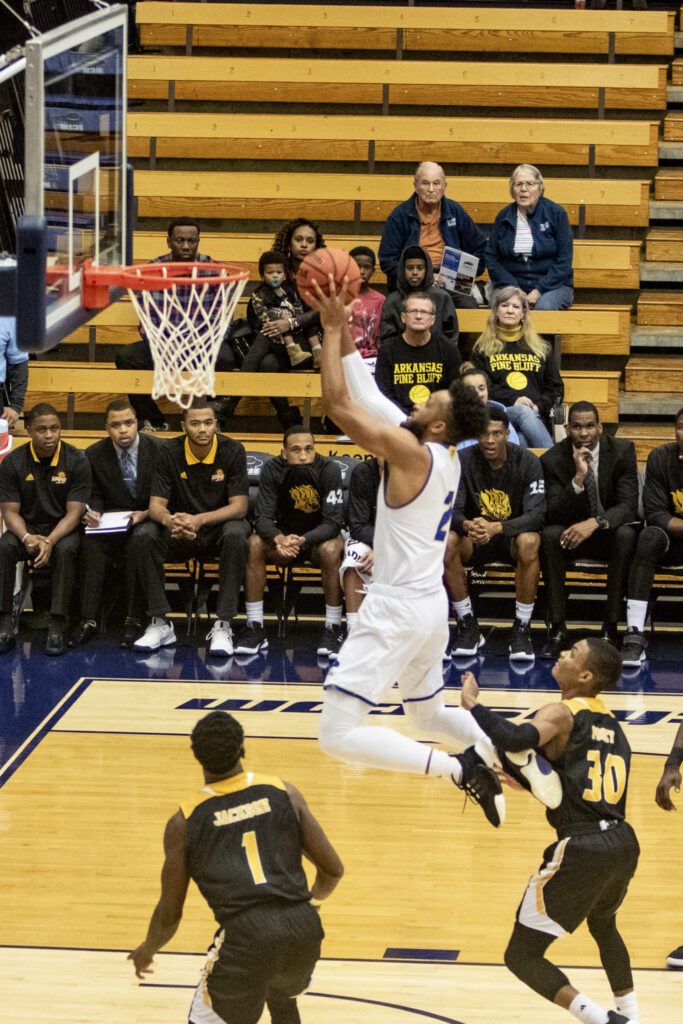 Following this week of matchups the regular season of conference play will have reached its halfway mark for the Gauchos, as the men’s basketball team is set to host Big West opponents CSUN and UC Davis.

UCSB will stay at home for this week’s conference double header, as it first welcomes the CSUN Matadors on Wednesday, then the UC Davis Aggies on Saturday.

After splitting their pair of matches last week, with the former being a heartbreaking 66-62 overtime loss to UC Irvine at home and the latter an imposing 75-54 road win against Hawai’i, the Gauchos will be looking to continue their winning ways through this week’s Big West doubleheader.

As the team’s impressive season ensues, UCSB currently stands at an overall record of 16-5; with at least 10 guaranteed games left this year, this performance is on a record-breaking pace considering 23 wins in a single season is the best finish the men’s basketball program has ever had.

Following the most recent loss to UC Irvine, the Gauchos are unfortunately no longer undefeated at home. However, UCSB’s 9-1 home record still demands respect from opponents as the team looks to successfully defend the Thunderdome through this week.

Wednesday’s opponent, CSUN, will want to flip the script as the Matadors inch closer and closer to a .500 win percentage. On the season, CSUN maintain an overall record of 10-13; with their away record standing at 3-6.

Entering this one, the Matadors will be coming off a most recent home win against Cal Poly, which resulted in a final result of 83-65. CSUN is, historically, a familiar foe for UCSB, as this week’s confrontation is soon to be the 57th time that these two sides have ever faced off; the Gauchos hold the advantage, however, in the all-time series with a 37-19 record.

As for UC Davis, the Aggies’ situation hasn’t been quite as kind. On the season, UC Davis barely reaches the .300 win percentage mark, as the team find themselves at an overall record of 6-14. With a decent home record of 4-3, the Aggies can blame their struggles on their consistently poor road performances; UC Davis’ away record currently stands at a 1-10 on the season.

With a favorable Cal Poly matchup on Thursday, before they meet with UCSB on Saturday, the Aggies might be in inspirational form considering they’re coming off a most recent 84-71 win over UC Riverside. Historically, this will be the 39th time that this side has faced the Gauchos; UCSB also leads the all-time series record in this one, with a 29-9 advantage.

For this week’s conference doubleheader, a player to watch for the Gauchos would be freshman forward Amadou Sow. After tying for a game-leading 20 points, Sow also added 11 rebounds to his name during his spectacular performance against Hawai’i.

Junior guard Max Heidegger was the other Gaucho to have scored 20 points that night and he’ll be another player to watch considering his return to the starting five was alongside sophomore guard Devearl Ramsey; head coach Joe Pasternak’s decision to start both of these guards is a scenario that should be closely monitored, as the two may simultaneously feature again this week.

For the Matadors, one to watch would be sophomore guard Terrell Gomez. Leading his team in total minutes, Gomez plays a crucial role in CSUN’s strategy. At 5’8”, Gomez runs his side’s offense by averaging almost 20 points a game and earning the second most assists with 65 to his name.

It’s the TJ Shorts II show for UC Davis, as the senior guard takes on the role of scorer and playmaker for his side. Shorts II seemingly covers the entire court at times, considering that he leads the Aggies in scoring with 292 points, rebounds with 101, assists with 82, and in steals with 35; it’s within the Gauchos’ best interests to find a way to limit his game.

A Big West update is in order, as UCSB continues their fight for that top of the table spot, as the team currently stands at second place in league standings with a conference record of 5-2; UC Irvine remains in first with their 7-1 conference record, whilst a game ahead of the Gauchos. Meanwhile, CSUN is the middlemost team in the standings, at 4-3, and UC Davis is in sixth place, at 2-4.

UCSB is set to host this week’s Big West action at the Thunderdome, starting with CSUN at 7 PM this Wednesday, February 6th, then against UC Davis at 9 PM on Saturday, February 9th.