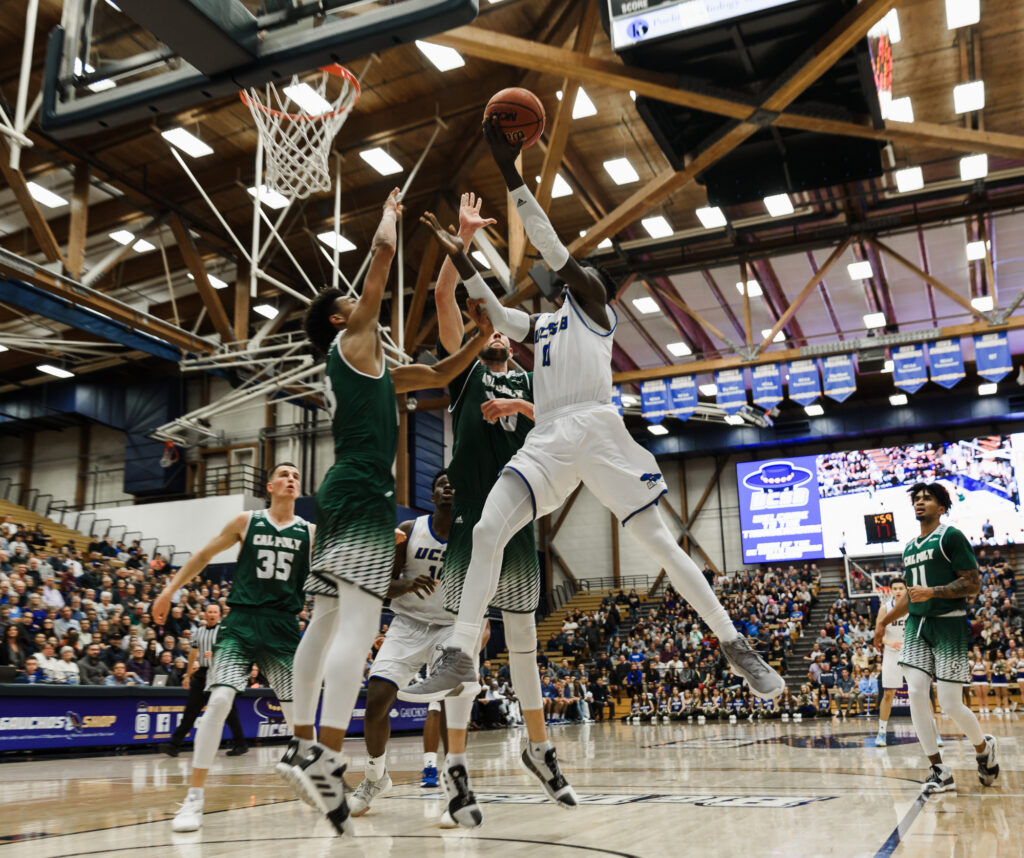 In the midst of its most difficult stretch of the season, the UC Santa Barbara Men’s Basketball team bounced back with a 75-54 blowout over the Rainbow Warriors of Hawaii to improve to 16-5 overall this season with a 5-2 record in the Big West Conference.

The Gauchos fed off the persistence of freshman forward Amadou Sow who had 20 points and tied a career-high 11 rebounds for his second career double-double. Sow shot 9-15 from the field for his fourth 60 percent performance in the past five games.

How about a coming out party for junior Max Heidegger? This was Heidegger’s game of the year with 20 points on 5-9 shooting including three of five from deep. The 2018 first-team All-Big West guard was a perfect 7-7 from the stripe and added three rebounds and three assists without a turnover in his 30 minutes on the floor.

Santa Barbara went blow for blow with the Rainbow Warriors through the first 13 minutes of the first half before graduate guard Armond Davis fed Amadou Sow a pass in the restricted area for him to muscle in with a right-handed hook to take a 19-18 lead.

Heidegger tagged along on the ensuing possession on a drive from the far baseline to draw contact at the rack and get the bucket to go while falling to the floor.

Of the final 11 points scored in the first half, Heidegger accounted for eight of them while accruing two separate three-point plays off of fouls from juniors Eddie Stansberry and Zigmars Raimo to put UCSB on top 30-26 heading into the break.

Stansberry is tenth in the Big West in scoring efficiency with 12.7 points per game, but only managed to score six against the Gauchos with a pair of three-pointers. Raimo, on the other hand, knocks down a second-best 57.6 percent from the field, but shot well under that tonight going 4-9 with 10 points and four rebounds.

Coming out of the break, Santa Barbara broke away with eight straight points in the paint including a spiral finish from Amadou Sow against Raimo from the left block before the senior forward tip-toed the right baseline for an up-and-under finish.

The Gauchos preceded to go on a 16 to nothing tear as Davis and Sow contributed for five and six points respectively over the four-minute frame to put UCSB in the lead 54-33 with 9:54 on the clock.

Heidegger followed suit with 12 of the next 13 points to close this one out for the Gauchos with a monster 21-point win over fourth ranked Hawaii who falls to 13-7, 4-3 in conference play following just their third loss at home this season.

The win for SB consisted of productive and efficient shooting throughout the night including 65.4% of field goals in the second half.

Hawaii struggled from the field shooting 38% for the game while connecting on just 5-22 from beyond the arc.

The win comes after a nail biter that fell through the cracks as No. 1 UC Irvine handed UCSB its first home loss of the season in the Thunderdome as the ‘Chos fell 66-62 in overtime.

Irvine came out on top after an off-shooting night for Santa Barbara who hit just 33% of their attempts from the field in a loss to the best defensive team they’ve faced all season.

It was graduate forward Jonathan Galloway and junior Tommy Rutherford that bullied the Gauchos in the paint with a combined 17 rebounds and five blocks while Rutherford supplied 11 points and Galloway added nine on 4-6 shooting.

Collin Welp was unstoppable in the first half with 10 of his 12 total points off the bench, but it was redshirt junior who came away with eight of Irvine’s 10 overtime points to secure the victory and first place for the Anteaters.

Following a split over the weekend, Santa Barbara will host Cal State Northridge on Wednesday, February 6 at 7 p.m. before UC Davis comes to town on Saturday, February 9 for a 9 p.m. tip-off time in the Thunderdome broadcast on ESPNU.