I was told that the first rule in surviving sharing a room with two other girls is to master the art of getting ready without knocking into everything and waking up your roommates. And as a stereotypically loud Jewish girl, this posed to be a difficult challenge. As I buzzed around the two square feet of space in Santa Cruz Hall that I call home, dancing to tunes in my earbuds and getting ready for my first day of college, I hit my head on the bunk bed, knocked elbows with the closet door and ultimately ended up with my wire tangled around my blouse.

Omnipresent tech giant Apple is extremely adept at creating solutions for problems that I didn’t even know I needed fixed. This was no different with the release of the legendary creation AirPods, an idea so fresh and innovative that even as I type this article my computer adds an ugly, red squiggly line underneath the name. As normal wire headphones are still relevant and functional and the tiny Tic Tac-esque pod carries a not-so-tiny price tag, there have been legitimate questions over whether this Bluetooth upgrade is worth the craze it has created. 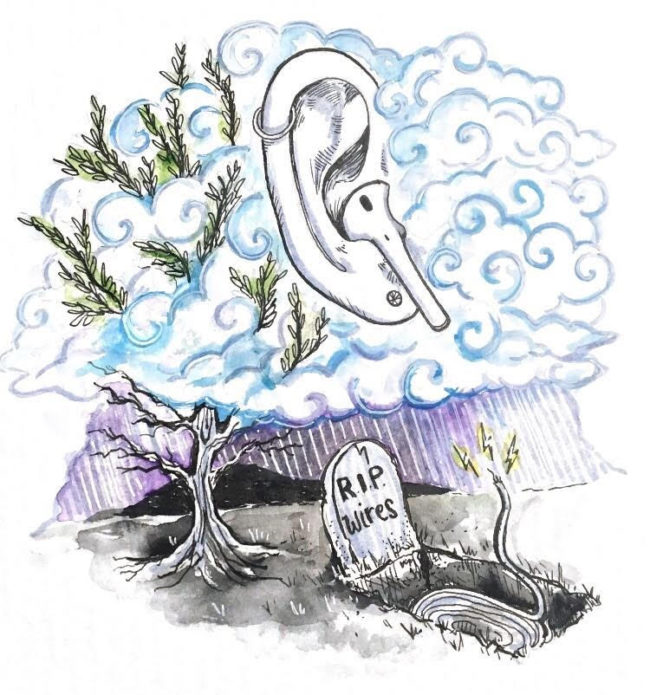 Since their release, these headphones have become a cultural phenomenon, taking center stage in the thousands of memes created about them and their owners, who shove the white pods into their ears with an almost cultish ferocity. The gist of these images is that the general public is mocking those who forked over the $159 for acting like owning the white pods has allowed their socioeconomic status to skyrocket.

Though I had never thought about buying myself a pair of AirPods, I somehow ended up with a pair. During my first few weeks of school I would be biking around, one-handed, and chatting with my dad on the phone when I would suddenly lose control of my bike — as inexperienced freshmen tend to do — and tumble and crash. The whole experience was so dramatic, my phone would go flying and my cheeks would flush with embarrassment. This happened on multiple occasions, each time with my dad freaking out, screaming into my abandoned phone and praying that I hadn’t broken a bone this time.  When my parents came to visit for Parents Weekend, my dad got me the telltale white box, and thus I was drafted into the ranks of the bougie.

I was constantly paranoid that everyone around me would hear the Britney Spears blaring in my ears. However, once I got over my paranoia, I discovered the fabulous and practical uses of my new toy.

At first I was so paranoid. Being the astonishingly forgetful person that I am, I was terrified I was going to lose them or accidentally flush one down the toilet within a week. On top of that, I was constantly paranoid that everyone around me would hear the Britney Spears blaring in my ears. However, once I got over my paranoia, I discovered the fabulous and practical uses of my new toy.

Now, I dance around getting ready for my day and not getting tangled. I bike through I.V. while gossiping to my mom and don’t even have to pull my phone out of my backpack. The technology on the device blows my mind. Pulling one out of my ear pauses my music. Double tapping a pod allows me to ask Siri to put on a different playlist or shoot out a text.

Though they are ridiculously expensive, I try and calm myself by thinking about how much more often I use them than I used my wire headphones in the past. I argue that I spent more on my phone and even more on my computer, the other items in my life that I cannot live without. And though people with AirPods continue to be judged and poked at, after winter break a suspiciously increased amount of people were walking around campus with the telltale white pods in their ears.

Time will only tell if it will become mundane to see folks walking around seemingly having conversations with themselves. Until then, this girl firmly declares herself a member of the AirPod cult.

$159 for earbuds? Stop whining about tuition costs, while you are making frivolous purchases for things you really don’t need.