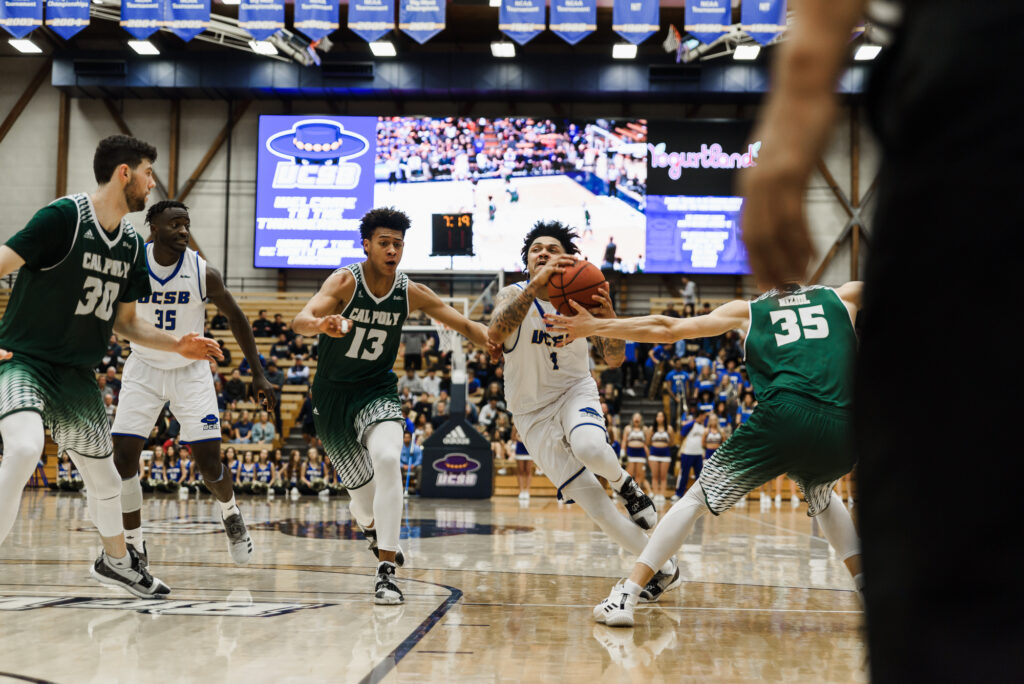 The Gauchos’ recent loss to Fullerton seemed to be a distant memory on Saturday evening as the UCSB men’s basketball team returned to its dominant ways with a convincing 82-71 victory over Long Beach State.

In his groove once again, graduate guard Ar’mond Davis ran the Gaucho atack and detonated for 24 points and 11 rebounds, his second double-double performance of the season. This was Davis’s sixth 20-point contest of the year, as 17 of his 24 points and nine of his 11 boards were recorded in the first half.

While 49ers’ star senior guard Deishaun Booker accounted for a near triple-double with 25 points, nine rebounds and seven assists, the majority of Booker’s points resulted from trips to the line.

Booker alone shot 12-15 from the stripe while Long Beach State as a whole had 36 shots at the line, compared to just 22 for UCSB.

The 11 shots taken by Booker were his least amount of field goals attempted through conference play, since he was considerably tied down by sophomore JaQuori McLaughlin from start to finish.

McLaughlin has received the toughest defensive assignment year in and year out, and Booker was no different. The 2016 Washington Mr. Basketball honoree ran for 39 minutes to put the clamps on a dangerous 49ers attack. He also added 15 points on 6-12 shooting with five rebounds in the process.

Davis and McLaughlin carried the bulk of the first half scoring for the Gauchos a combined 24 of the first 38 points in the former 20 minutes, while UCSB captain point guard Devearl Ramsey accounted for the majority of the helpers.

Yet, much like Fullerton, which relied on a triple-trap in the second half to shut down the ’Chos, Long Beach did its homework, and, immediately out of the break, ball handlers were met by a three-man ambush when they crossed the timeline in the second half.

However, this time around, Coach Joe Pasternack had an answer for the smothering defense in no man’s land — his name was Max Heidegger.

Heidegger has struggled through conference play thus far, but his sharp intuition proved crucial to the Gaucho charge in the second as he stretches the floor with swift ball movement and active passes to the paint.

After Heidegger faked left and drilled a trey from the right wing, he returned and fired to wide-open Gaucho big men Robinson Idehen and Amadou Sow in the restricted area to stretch the floor and beat the triple-trap, which was detrimental to Santa Barbara’s attack against Fullerton.

Preseason first-team honoree Max Heidegger finished with 10 points, six assists and zero turnovers, as his second-half effort was essential to UCSB’s success down the stretch.

With Heidegger back in his quarterback role to break the press, freshman Amadou Sow came alive with 12 points, shooting 5-6 from the field in the second half on his way to 14 points in just 15 minutes as he strived with foul trouble the entire night.

Sow picked up two quick fouls within the first two minutes of the game, which limited him to minimal minutes in the first, but since all of the Gaucho bigs were frequently whistled throughout the contest, Sow saw minutes toward the end of the second half although he had already been called for four fouls.

Six Gauchos were piped for three or more fouls while Mclaughlin, Sow and senior Jarriesse Blackmon each picked up four fouls.

After Deishaun Bookers cut the lead to 58-54 with 7:14 to play in the second, Max Heidegger, Devearl Ramsey and Ar’mond Davis delivered a triad of triples to inflate the the lead to eight, with the Gauchos on top 67-59 with five minutes to play to knock off the Niners.

After three straight on the road, the Gauchos head back home to host UC Irvine for a battle of first place in the Big West on Thursday, Jan. 30, with an 8 p.m. tip-off in the Thunderdome.