The pain is pulsating, knocking me with the light-headed high of nausea. My stomach screams and I clench myself in hopes that no one will hear.

The whole-wheat pasta is not gluten-free. The non-GMO apple is still laced with neurotoxic pesticides. The hormone-free hardboiled egg came from a disease-infested cage. The Arbor disappoints yet again.

There is a new eating disorder sweeping the nation and UCSB in particular. Orthorexia nervosa is the condition of having an unhealthy obsession with healthy eating. 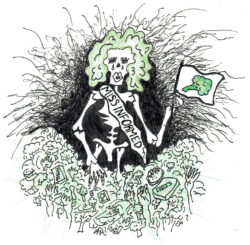 Closely linked to Anorexia nervosa and Obsessive-Compulsive Disorder, orthorexia nervosa is marked by an obsession over checking nutritional labels, analyzing the health value of what others are eating, planning out daily meals and excessively scrolling through diets online.

Orthorexia starts with the development of a theory about health food and manifests into “a self-punishing relationship with food [in which] a progressively shrinking universe of foods is deemed acceptable,” according to Dr. Steven Bratman, an American physician who identified orthorexia in 1997. The more restrictive the diet, the more likely the diet will spur the psychological factors igniting the eating disorder.

Chances are you or a loved one is a vegan. UCSB is a hotspot for herbivorism with a vegan studies course, vegetarian Mondays at campus dining halls and coalitions like “Vegans of UCSB.” The interplay of environmental and health benefits associated with “going vegan” has inspired significant numbers of our student body to make this dietary shift. However, pure intentions can quickly turn sour.

“Many people who develop orthorexia begin as raw foods vegans,” Dr. Bratman notes. Veganism can be difficult to manage safely since exclusively plant-based food options are not always accessible. Finding these foods for every snack and meal requires special attention, which can foster uncertainty, anxiety and consequently, orthorexia.

While the diets of gluten-free gurus and Paleolithics seem just as restrictive as veganism, Dr. Bratman has found that raw foods vegans have the greatest likelihood of developing orthorexia nervosa. However, it is worth noting that even someone with the most scientifically sound diet can suffer from this disorder, as it predominantly affects mental health rather than physical health.

While orthorexia is closely linked to anorexia, the motivations behind these two eating disorders differ starkly. Orthorexics avoid foods that would violate their theory of health and fast to detox. Anorexics avoid foods that would make them gain weight and fast to lose weight. Orthorexics seek to broadcast their health habits while anorexics attempt to camouflage their condition.

The line between orthorexia and anorexia is quickly blurred when the thin ideal takes over. The vegan diet, for example, happens to involve foods low in caloric density. A new vegan with the intention of eating healthy and sparing animals from pain can easily drop his or her weight to dangerous levels. At this point, the vegan notices, whether consciously or not, that his or her body is looking increasingly like the cultural ideal. Dr. Bratman calls this weight loss, correlated with many cases of orthorexia, “emotional heroin” which can fuel the crossover from orthorexia to anorexia.

Haha! I knew diets were stupid. Time to eat my Twinkies in peace.

Not exactly. Life is too short for stressing over sugars, but life will be really short if you don’t take care of  your body’s physical needs. Supermarkets are just one bike ride away which makes finding food easy. The difficulty comes in choosing from the shelf.

The American food industry is highly lucrative and therefore constantly worthy of question. Capitalism creates the incentive for food producers to compromise health and safety for profit. More than 90 percent of the corn and soy on the market is genetically modified (GM), which the Institute for Responsible Technology has identified as the cause of numerous ailments including liver problems, allergic reactions and reproductive sterility.

In 1992, the Food and Drug Administration (FDA) claimed it had no information proving GM foods are significantly different from conventional foods. Uncoincidentally, the creator of a policy protecting the production of GM foods was Michael Taylor, the former attorney for the infamous agrochemical bio-tech company Monsanto. With a vulnerable and dubious FDA, we have to be conscious consumers in America’s for-profit food market.

So is it better to live a life consumed by consumption?

Life is too short for stressing over sugars, but life will be really short if you don’t take care of  your body’s physical needs.

When I was only seven years old, I developed anorexia. I suffered the pains and consequences of this disorder throughout my life and used healthy eating as a way out. Yet, my obsession with healthful moderation blemished my vital body with a crippling mind.

The alternative is scary — to stop caring, to be okay with gaining weight, to consciously subject oneself to health risks. I guess I am writing to warn you about something close to home, something I deal with, and something I am certain my colleagues also know very well.

Orthorexia nervosa has yet to be formally noted in the Diagnostic and Statistical Manual of Mental Disorders…maybe because it’s silly. How do you distinguish between enthusiasm and obsession over a health theory?

If there is one thing to be learned from orthorexia, it is the power of belief. How desperate we are to believe in something, to find purpose and seek spirituality, all at the expense of our sanity.

Food, the essence of life, seems like the perfect vessel to use in transcendence. Diet dogmatists invest their delicate bodies, minds and souls into their theories on health. Yet, as with many theories, they rest on speculation and are unable to be universalized. Each body is unique, so each digestive experience is also unique.

Recognize the imperfection in the theories you swear by and use that uncertainty as motivation to stop swearing. Whole-grain foods have gluten. Apples have carbs. Hormone-fed cows might make you grow taller. But hey — that’s tough to prove.

Miranda de Moraes dares you to drop the labels.

As a recovering orthorexic, I was so happy to see this being talked about. Next step is getting it into freshmen orientation so students can be more informed about how self-control and obsession with healthy eating can so quickly escalate.

Excellent and thought-provoking article Miranda! Thank you for bringing this very real issue to light!