The Daily Nexus
Sports
Gauchos Seek First Consecutive Wins of the Season
January 24, 2019 at 5:30 am by Brandon Victor 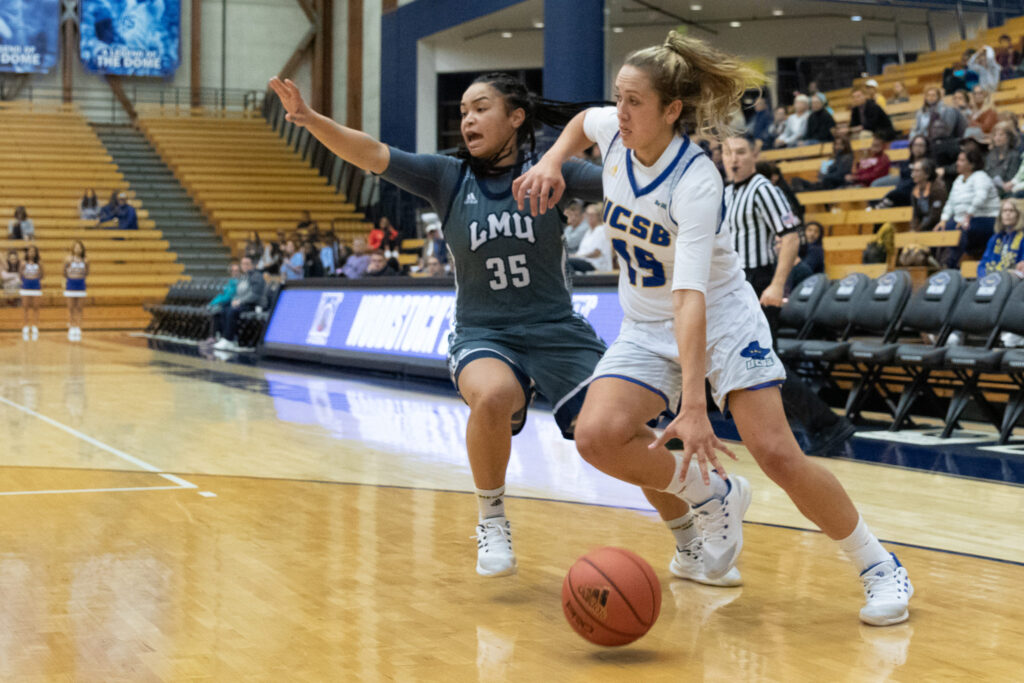 One week ago, the hopes of the UCSB women’s basketball team hung by only a thread. Following their second consecutive conference loss — a defeat at the hands of struggling rival Cal Poly — the Gauchos found themselves at the bottom of the Big West standings.

But in sports, one win can change everything. Following Santa Barbara’s home victory over Long Beach State, the Gauchos find themselves only one and a half games behind first place in the conference. With home games this week against Cal State Fullerton and Hawaii, anything is possible.

“It’s always great to get a win in your rivalry game, and it was very important in confidence and momentum for us,” Head Coach Bonnie Henrickson said. “I thought we did a good job of cleaning up things that we have struggled with this season, and it showed on the floor.”

Perhaps most importantly for the Gauchos, junior center Natalia Bruening was finally able to get going in conference play, dropping 16 points on an efficient 7-8 from the floor. Bruening’s ability to box out also helped UCSB dominate the glass, with Santa Barbara out-rebounding Long Beach by a massive 17 rebound margin.

“We defended better, something we have talked about as a team [all year],” Henrickson said. “If we aren’t scoring, we have to be better defenders. We forced Long Beach into some tough two’s, and it was one of our better rebounding games on both ends of the floor.”

Impressively, UCSB pulled off the victory despite making only one three-pointer the entire game — a shocking stat considering the emphasis on three-pointers in the modern game.

This week, UCSB will face a massive test when Cal State Fullerton (11-6,2-1) comes to town on Thursday. The Titans feature one of the most consistent offenses in the entire conference, with the team averaging nearly 68 points per game on the season. Much of the team’s success on that end can be attributed to its elite ball movement: CSUF averages nearly 16 assists per game and has four players averaging double figures on the season. This movement allows the Titans to get open looks, with the team as a whole shooting almost 44 percent from the floor on the season.

Fullerton is led by sophomore guard Raina Perez — a floor general who leads the team both in scoring (13.9 ppg) and assists (5.4 apg). Perez has been a workhorse all season, averaging nearly 36 minutes per game while still remaining efficient.

Perhaps the biggest surprise for CSUF this season has been freshman guard Amiee Book’s scoring off the bench. Arguably the best sharpshooter in the entire conference, Book is shooting 50 percent from beyond the arc despite taking four three’s a game.

“Fullerton has a very good post and they surround her with good playmaking guards who can shoot the three,” Henrickson said. “They do a good job of manufacturing offense, and they can score on every level. We need another strong team defensive effort on Thursday night.”

Despite its gaudy offensive numbers, Fullerton averages almost 17 turnovers per game — a fact that has at times proved to be its achilles heel. The Titans also give up almost 66 points per game, meaning the Gauchos should have plenty of room to operate their offense on Thursday.

If the ’Chos are to keep pace with Fullerton, they will need junior guard Coco Miller to be on her game. Santa Barbara’s leading scorer this season with 14.6 ppg, Miller dropped a career-high 33 points against Cal Poly earlier this month. In the win against LBSU, however, Miller struggled to find her shooting touch, going 0-5 from downtown.

The sledding should be slightly easier for UCSB on Saturday, when a struggling Hawaii team comes to town. Antithetical to CSUF’s offense, the Rainbow Wahine feature a rather anemic offense that has struggled mightily in conference play. In their last conference game against Cal State Northridge, Hawaii scored only 29 points in the entire game.

Still, Santa Barbara can’t afford to overlook a squad that has already knocked off first-place UC Davis during conference play. What Hawaii lacks in offensive firepower, it makes up for with a defense that holds opponents to 40 percent shooting from the field. Even in its blowout loss against CSUN, Hawaii only gave up 49 points the entire game.

The Rainbow Wahine are led by junior Makenna Woodfolk, a jack-of-all-trades forward who averages 11.8 points per game while also grabbing 5.9 rebounds per game — both of which lead the team.

Similarly to Long Beach State, Hawaii has struggled on the glass all season — an area that should pay dividends for the Gauchos on Saturday. Look for UCSB to try to feed Bruening inside and play out of her to break apart the stout Hawaii defense.

With momentum on its side and two home games this week, UCSB has a golden opportunity to jump back into the conference title race. The Gauchos will host the Titans on Thursday at 7 p.m., while their game against Hawaii will tip off on Saturday at 4 p.m.