The Daily Nexus
News
Two Candidates Declare in Third Attempt To Elect EVPSA
January 17, 2019 at 12:01 am by Evelyn Spence

The Declaration of Candidacy period for the External Vice President for Statewide Affairs Winter Quarter special election closed at 4 p.m. on Wednesday, leaving two candidates in the running for an executive position that has remained vacant for over nine months. 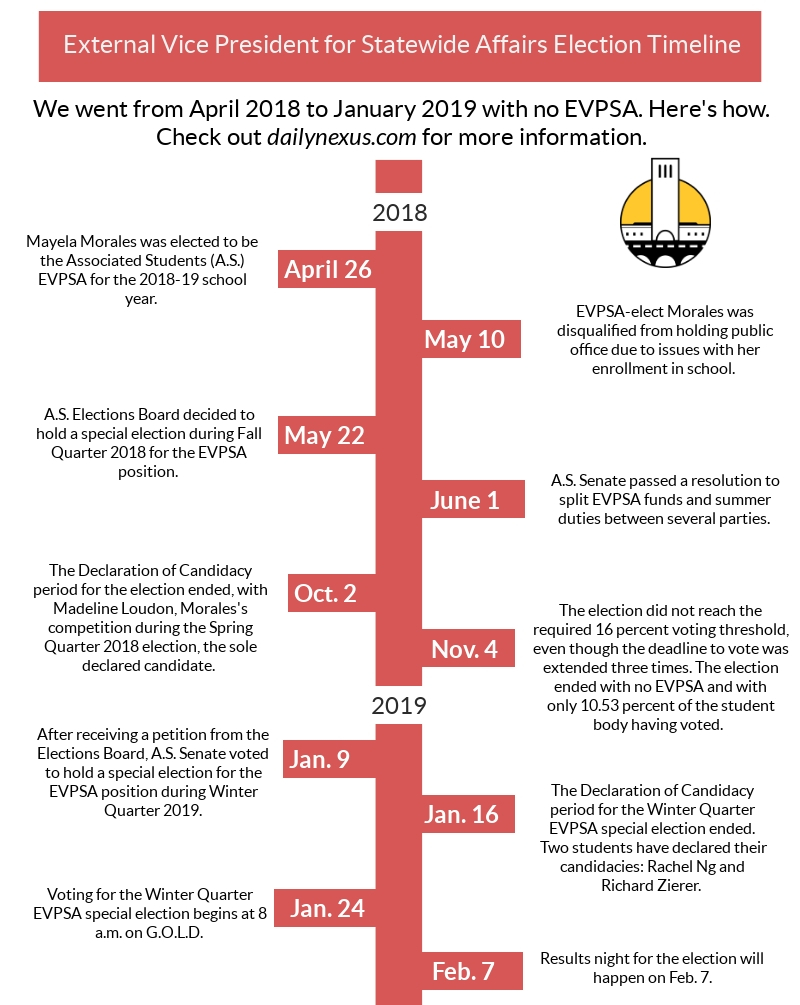 The two declared candidates – Richard Zierer and Rachel Ng – are newcomers to the External Vice President for Statewide Affairs (EVPSA) election. Neither have previous experience in Associated Students (A.S.) Senate and did not run during either the Spring Quarter 2018 election and the Fall Quarter 2018 special election.

In the first, she lost to her competitor, Mayela Morales; in the second she was the sole candidate, but the election did not reach the 16 percent voting threshold required for it to be valid.

This is Election Board’s second attempt to fill the position following the disqualification of EVPSA-elect Morales during the Spring Quarter 2018 election.

The board discovered that Morales, a fifth-year global studies and Chicana and Chicano studies major, was not enrolled during Spring Quarter 2018, disqualifying her from the position.

Following the failure to meet the minimum voting threshold for the fall election, the board petitioned to hold a Winter Quarter special election. The Senate initially tabled the petition over winter break but eventually passed it the week before school resumed.

On-Campus Senator Lea Toubian expressed concern about voter burnout during Wednesday night’s meeting – because the board has held an election every quarter this school year unlike the typical one-election-a-year system – but Elections Board Chair John Paul Renteria said he did not think it would be a problem for the upcoming spring elections.

Voting for the election opens on Jan. 24, 2019. Results will be announced on Feb. 7. More than eight percent of the student body must vote in the election for it to be valid.

richard is a pos republican. he cannot become evpsa

Richard is one of the most respectable, intelligent, and driven men I have ever met in my life. I 100% (and non-anonymously) couch firnhis character with the highest of esteem.