The Daily Nexus
News
I.V. CSD and STESA Finalize Agreement for Resource Center in I.V.
January 17, 2019 at 12:10 am by Arturo Martinez Rivera 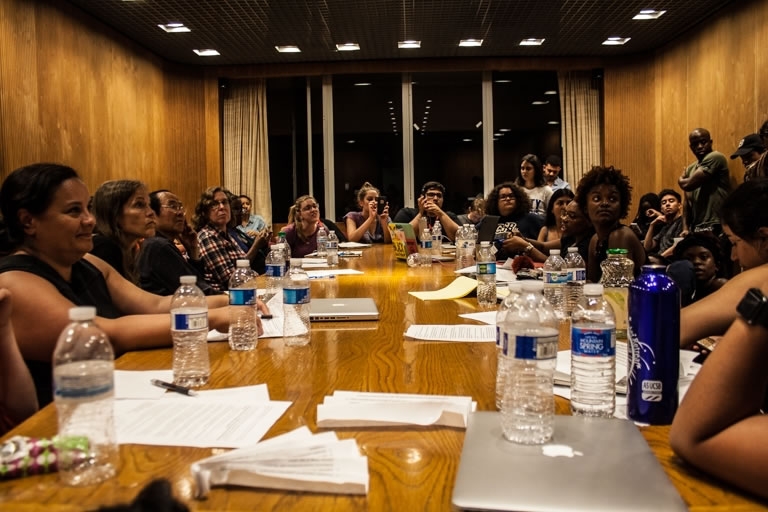 Students proposed a survivor resource center in May 2017 as part of a series of 12 demands that would increase comunity safety regarding sexual assault. The center would provide legal assistance for survivors of sexual assault and would receive support from A.S. Jose Ochoa / Daily Nexus

The Isla Vista Community Services District finalized an agreement during its Jan. 8 meeting to open a survivor resource center in Isla Vista in collaboration with Standing Together Against Sexual Assault, a organization addressing sexual assault in Santa Barbara.

Students Against Sexual Assault (SASA) President Emily Montalvo-Telford said the new center would make it easier for survivors to meet with a Standing Together to End Sexual Assault (STESA) representative and receive immediate counseling. The center will be open 24 hours a day, seven days a week.

The center will provide a place in I.V. where survivors can receive medical attention, make a police report and obtain an emergency protective order. Previously, survivors would only have access to these services at STESA’s location in downtown Santa Barbara.

Survivors will also be able to obtain emergency services such as food, shelter and transportation. The center will also have the resources to help survivors apply for U Visas and T Visas, Montalvo said.

U visas are non-immigrant visas designed to aid victims of crime who have suffered physical or mental abuse in the U.S. and are assisting the investigation of the crime. T visas provide the same service to those who have suffered from human trafficking.

The idea for a Survivor Resource Center in I.V. began with Ro’Shawndra Earvin’s 2017 Demands, a list of 12 demands presented to Chancellor Yang after a 13 hour sit-in.

STESA, along with SASA and the I.V. CSD board members, have been collaborating over the past year in order to make the center a reality.

Spencer Brandt, board president of the I.V. CSD, said work on the project first began in Spring 2018 when he was approached by Montalvo and Madeline Loudon, I.V. Community Coordinator for SASA. They presented to Brandt the lack of services for survivors of sexual assault provided by UCSB and said that the resource center would be a quick solution to the problem.

“We want to be a voice for survivors when there are injustices in the system,” Brandt said. “So this, in particular, is an example of a supporting service.”

Funding for the center primarily comes from the Measure R tax that was passed last year, granting the CSD a source of revenue for their projects.

The survivor resource center will be located in a central location in I.V. and will be easily accessible for residents of the community, Montalvo said. To access the center, a survivor would need to call STESA’s hotline at (805) 564-3696, where they will be directed by an advocate to the center for aid.

“During our budgeting process this year, it was a big priority for the budget committee to make a line item specifically for renovating this space so that it could become the survivor resource center,” Brandt said.

Montalvo and Brandt both mentioned how rewarding it was to work with the various groups dedicated to resolving the issue of sexual assault in I.V. and UCSB.

“Honestly, this project was one of the smoothest that I’ve ever seen, especially when it comes to projects where I’ve worked with student groups on it, and that is really a testament to SASA and everything they’ve done. The same would go for STESA,” said Brandt.

Arturo Martinez is a reporter at the Daily Nexus and can be reached at news@dailynexus.com.