The Daily Nexus
Science & Tech
Microbial Assassins: Changing the Face of Modern Antibiotics
January 17, 2019 at 10:38 am by Sunidhi Sridhar

Looking back at the scientific advancements throughout the history of medicine, it is evident that these past decades have transformed the way humans approach the treatment of infections and diseases. From the breakthrough discovery of antibiotics in the early 20th century to the latest developments in targeted cancer therapies, new research continues to progress at warp speed.

Here at UC Santa Barbara, a team of researchers has detected a mechanism by which various strains of bacteria target and destroy rival strains.

The widespread use of antibiotics in treating bacterial infections has resulted in widespread resistance of these antibiotics, and this may lead to difficulties in controlling illnesses that are now easily preventable. As Kiho Song, a fifth-year doctoral candidate and graduate researcher, explained, the human microbiome is composed of tremendously diverse microorganisms; antibiotics that are commonly administered can at times be ineffective at identifying and eliminating bacteria that carry the infection.

This study, however, reveals a procedure in which bacteria will recognize other bacteria, often of the same species, and deliver a toxin to destroy them. The reason for this is that bacteria of the same species often compete against one another for the same niche, and this will eliminate any competition for limited resources.

When a bacterium identifies a molecule on the surface of another bacterium in close contact, its sensor filaments will bind to it. The bacterium will then secrete the destructive toxin. These findings are of great promise to the scientific community, Song pointed out, as “we can equip helpful bacteria with a toxin-delivering system to target and destroy harmful ones. Such specificity could give us more control over our microbiome and our health.” 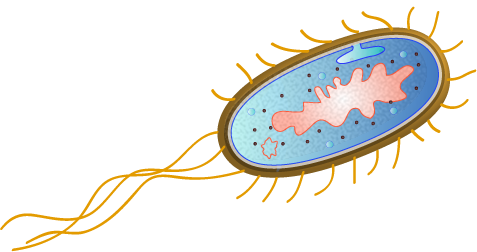 The researchers studied the toxin delivery system by which a strain of E. coli, EC93, inhibited the growth of rival E. coli strain K-12. This model system sheds light on how this mechanism is wielded against specific cells, which could have significant implications in addressing the increasingly worrisome issue of antibiotic resistance. / Courtesy of Wikimedia Commons

The presence of such toxin delivery systems has been known to researchers for some time and is quite common in pathogens. Contact-dependent growth inhibition systems, referred to as CDI, were first observed in a strain of E. coli present in rat intestines. This strain, EC93, inhibited the growth of a different strain of E. coli called K-12.

The results from this study, however, significantly increase our understanding in regard to how these systems generally work.

The model system, developed under the supervision of faculty member Dr. Christopher Hayes, uses electron cryotomography, a high-resolution imaging technology, to take a closer look at the proteins that form the filament as well as the infiltration of the cell periplasm, the gel matrix between the inner cytoplasmic membrane and the bacterial outer membrane, by the toxin.

These extracellular filaments measure a mere 33 nanometers and are located on the N-terminal end of the effector molecule. On the C-terminal end of the molecule, there is a programmed secretion arrest so that toxins are not released in the absence of a target cell. When the bacterium is in close proximity to a target cell, the filaments on the N-terminal will bind to a receptor protein and the C-terminal will activate secretion. In order to be destroyed by sibling cells, the bacteria carry immunity proteins, which neutralize toxins that may be delivered into their periplasm.

When asked about any major challenges or complications that arose throughout the research process, Song responded that, as with most research, the question he and his team sought to address required the contributions of many intelligent and innovative minds.

“Our discovery is built on collaboration and group effort. Being a young grad student at the beginning of the project, I especially needed more help from the team. I owe much to my advisor, Professor Christopher Hayes, and my co-author, Dr. Zachary Ruhe, for their guidance. Our findings wouldn’t be possible without the other co-author, Dr. Poorna Subramanian, and her expertise.”

This study comes at a time when scientists and researchers across the world are searching for ways to further improve the effectiveness of antibiotics, and its findings may lead to improved drug delivery technologies. With the rise of antimicrobial resistance posing a major threat to people’s health and wellbeing, there is an urgent need for new developments within the industry in order to contain the spread of infectious diseases.