The Daily Nexus
Opinion
Guns Trump Lives: Is It Even Worth Living In America Anymore?
January 17, 2019 at 12:01 am by Hannah Jackson

If you had asked me a few years ago where I’d want to live after college, I would tell you Los Angeles without a moment’s hesitation. Leaving my home state, or even my hometown, had never crossed my mind — that is, until now. As I consider more and more the growing insecurity and increasing frequency of mass shootings in our country, I don’t even know that I want to live in America at all.

Having spent Fall Quarter abroad in the United Kingdom, I experienced two major mass shootings — Pittsburgh and Thousand Oaks — from beyond the confines of the American border. Living in a country outside the U.S. has opened my eyes to how truly broken our political system is — one where the right to own a gun clearly trumps the right to live. 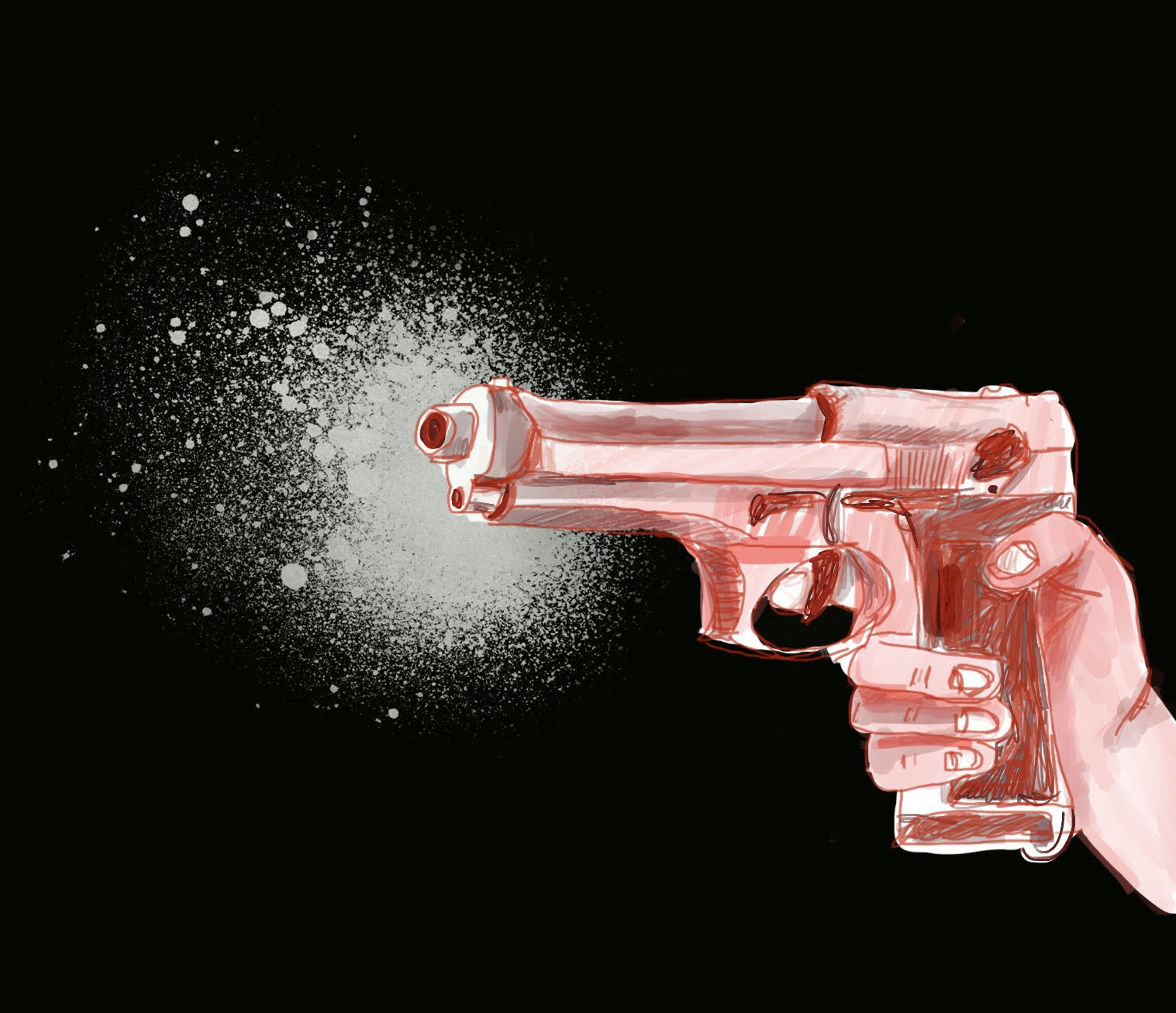 Going abroad always raises concerns, mainly of safety. The United Kingdom has seen a meteoric rise in anti-Semitism (as has the U.S.) and has since greatly tightened domestic security amid mounting threats of terrorism. But guess what it doesn’t have? Seemingly daily reports of horrific and preventable mass shootings.

Both the Tree of Life Synagogue and Borderline shootings hit incredibly close to home for me, as they targeted communities with which I consider myself affiliated. The Jewish community of Pittsburgh was targeted when a man opened fire using an AR-15 during a morning service at the Tree of Life Synagogue. Before his rampage, he allegedly shouted, “All Jews must die!” Amongst his victims were family members, a pioneering doctor and a Holocaust survivor. When one manages to escape the horrors of the Holocaust, it is such a cruel irony to die at the hands of an anti-Semite in a country previously viewed as a safe haven.

The Borderline shooting was another instance of a community close to my heart that was rocked by tragedy. While the country was still reeling from the Pittsburgh shooting, news soon broke that an ex-Marine fired into a crowded college night at the Borderline Bar & Grill in Thousand Oaks, California. The man used a legally-obtained Glock with an illegal extended magazine, though the illegality of said magazine is at odds with views typical to gun rights activists.

Trying to explain mass shootings to the friends I made abroad was incredibly frustrating, mostly because I couldn’t completely wrap my head around them myself. In no world does it make any sense for guns to take precedence over any human life. In the UK, the value of a human life over that of a gun is considered common sense. After a mass shooting in 1996, the UK banned several types of guns and strictly controlled background checks. Presently, the rate of gun ownership in the UK is 6.5 guns for every 100 people. The U.S., which has had a mass shooting for practically every day of the year, has a rate of 101 guns for every 100 people.

That being said, I felt at ease while out for the first time in a long time; like I could breathe at the club, at the movies, at school or on public transportation. While living in a big city certainly was unpredictable and unnerving things did happen, I never once worried about what I would do if someone pulled out a gun and started shooting. For the first time, I genuinely considered leaving America after college.

California has taken a very small yet important step forward toward greater gun control by raising the age of purchasing a firearm to 21, but we are far from full reform. As a community rocked by gun violence, it is Isla Vista’s responsibility to remain at the forefront of demanding better gun laws and what comes with it. Vote for representatives who will vote for common sense gun laws. Vote out the NRA’s puppets. And, in the meantime, remember that we have a long way to go before we see change.

I’ll leave you, then, with one quintessentially American takeaway: The right to own a semi-automatic assault weapon is somehow enshrined in the constitution, but you know what isn’t? Healthcare — something you’ll desperately need if you’re lucky enough to survive being shot.

Hannah Jackson thinks that the right to live is exponentially more valuable than the second amendment.

The English are extremely violent… ask soccer viewers in continental Europe. Or, the Irish.

If it was up to the average (stupid) Californian, guns would be banned outright.

You’re free to move out of the US if you please. Go to Turkey or South Korea if you think the US is so “bad”

You said “… the right to own a gun clearly trumps the right to live,” but did not expand on what notions “clearly” put guns over lives. How can a statement like that be throughly valid if it is not properly reinforced? I understand that this is an opinion piece, but to leave a statement hanging in such a manner without proper reinforcement seriously discredits the merits of its intended meaning.

“Is it even worth living in American anymore?” Ask the millions who have come here illegally

I agree that you probably would be better off in England. You can nurse your anxieties with their security theater until one day you come to realize just how other rights they don’t have.

Hannah, can you tell me what types of guns you think people should be able to own and under what conditions can they leave their house with those guns?

After the Second Amendment has been turned into a privilege and then revoked, for how long does government tolerate an unrestricted press?”

If you  think that the right to life is exponentially more valuable than the second amendment, how do you feel about the hundreds of thousand abortions (babies lives killed)?

Hannah Jackson, as in Hannah Beth Jackson? Bitch, you are so outed!

Oh so getting attacked with a knife or acid is cool with you? By all means, please leave. We have too many people as it is.

How convenient that you ignore the thousands of lives saved by firearms every year with numbers from as low as 80,000 to over a million dependent upon what sources one uses.
But it’s far easier to blame the object instead of the person who has misused the object, as trying to figure out and explain why human beings do stupid things like kill others.
It’s not the weapons but the person, and don’t say that if guns were banned the killings would stop, they won’t.
The use of vehicles has shown that bad people will find ways to kill.

Hannah, your ability to accurately gauge risk is being clouded by your emotions. In 2017, 37,144 people died in car crashes in the United States (NHTSA). In that same year, the highest year on record by far (Mother Jones), about 118 died in mass shootings. Based on that one year, you’re over 300 times more likely to die in a car crash than a mass shooting. If the perception of safety is your overriding concern–which incidentally, is common to the iGen (Lukianoff, Haidt)–then it makes more sense for you to relocate to a place without cars, like, say, North Sentinel… Read more »

While in the UK did you happen to look into all the knife violence is so bad that people are calling for knife ban. UK citizens are encouraging to turn them all in.
Like all good Leftist…..its the Knife not the criminal

Banning guns to stop mass shootings is like banning cars to stop drunk driving. The problem is one of culture; if you actually want to address the root cause of drunk driving, you need to address the culture of binge drinking and find ways to counter it. In the same way, banning guns won’t address the root causes of mental illness and the glamorization of serial killers in popular culture, which I think are the real reason for mass shootings these days. People like you, however, would rather tout easy solutions that align with your party politics and even ABANDON… Read more »

I came here 43 years ago to escape a Communist country. My neighbor’s family came here in 1947 to escape antisemitism in Europe. Both of which are embraced at UC. The USA has its problems, but is still the best place to be.