Nowadays it seems impossible for young adults to completely have their lives together, as we struggle to juggle friends, family, dating, self-care, academics, jobs, extracurriculars, etc. Despite the glaring difficulties we young adults face, the adults in our lives expect us to both survive and thrive. 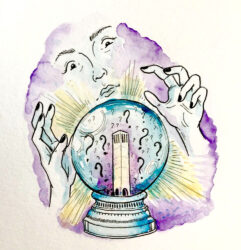 This expectation of having it all figured out hit the majority of us even harder when we first entered into college life, alone and without guidance. Thousands of students in the class of 2022 enrolled in UC Santa Barbara with no set of rules on how to navigate college life — and I was one of them.

I never could have predicted that I’d end up at UCSB, but it seemed like fate seeing as I’m interested in pursuing a major in environmental studies and the university happens to have one of the best and oldest programs for this in the country. I was ecstatic that I was going to be studying at the beach, and I had no choice but to imagine and map out my future at UCSB for the upcoming year.

I made many decisions in order to give myself a feeling of security entering college. I decided I was going to rush a sorority, get an environmental job and join intramural tennis. The fact that I could plan and thus see my future college self granted me a sense of ease. However, the activities I chose posed a dichotomy between my perception versus my reality. Rushing a sorority came with the expectation that you would feel as though you belonged, a feeling that never actually came for me. The environmental job I applied to did not work out and intramural tennis was discontinued at UCSB.

I planned my extracurricular life around a schedule of goals I could feasibly accomplish and, ironically, none of it panned out. And so, naively I decided to try again.

I rushed a business fraternity, thinking I would end up in a community where I could make friends while exploring my entrepreneurial interests. During the process, I’m not exactly sure how I ended up in a rush group with virtually all economics and accounting majors. When I did not end up joining, I was again back to square one and researched my next option: becoming a writer at the Daily Nexus.

This research was followed by a job opening I saw for the social media manager of the Nexus. I applied enthusiastically for the job and (spoiler alert) was eventually hired.

Journalism has been one of my dream careers since the moment I saw Rory working at the Yale Daily News on “Gilmore Girls”, but I’d have never thought I would work at my very own college newspaper — one of the most important organizations on campus.

In a way, this allowed me to identify a place for myself here at UCSB. The stigma surrounding young adults and having to figure out their entire lives before it even starts needs to end. I did not go into UCSB planning to double major in communications or be employed by a newspaper out of college. Now this is an exciting part of my reality and, possibly, my future. Overall, I discovered this was just one piece in the bigger process of identity formation in college.

The most exhilarating thing about being a college student is that you never know what is going to happen next or where your life will take you in a few months. Contrastingly, in high school, there is at least some degree of predictability: football games, homecoming dances, AP classes, static friend groups. I set myself up for success by being involved in as many leadership opportunities as I could, while simultaneously not really being sure why. In high school, I did what I thought was necessary to get accepted by a good college.

This secured my acceptance, for sure, but at what cost? Being too engrossed in school instead of the outside world and not really being sure of what I wanted to major in, prompting me to default into the negatively stigmatized “undeclared” major upon entering college. I wrote vague college essays on activities that I (and many, many other students in the world) enjoyed doing. These activities included volunteering, traveling, etc. But I found that most essays asked for that one passion you had developed and honed overtime, subsequently leading to an identity crisis no teenager should have to face at that young of an age.

Previous generations should realize that college needs to be less about fulfilling the expectations of the people in our lives and more about finding our passions at our own rate. Liberal arts majors should not have to worry about the backlash of widespread prejudiced views which hold that S.T.E.M. majors work harder, will inevitably earn more or are objectively better in some way. Each person at UCSB is unique and should be able to grow their respective skills and dictate their involvement based on their interests alone.

Every upperclassmen I have met at UCSB has assured me they have changed their major at least a dozen times, often to their family’s dismay. Students have expressed dissatisfaction with the major-declaring process, primarily due to each departments’ hesitation to permit students a major change if they are not completely sure of their decision.

Every time I hear a story like this, I am baffled that departments within UCSB so heavily discourage students to declare their major if they are not yet certain. Is that not what college is for? Finding what you eventually want to do with your life? Instead of persuading students to choose one major and stick to it, I challenge department heads and advisors to be more sympathetic. We are a growing and multifaceted generation of students with many, many factors to consider when choosing a career — the competitiveness of the job market, the state of the economy, various gender and race biases, etc. — while still vying for jobs that genuinely interest us.

While my confusion in preparing for what is coming next in my personal, academic and work life persists today, I have discovered during my short time at UCSB that I am not supposed to prepare at all. I have met many interesting people at UCSB and feel like I am trying something new almost every week. While sometimes it seems I am wandering aimlessly, the activities that stuck with me (like the Nexus) have given me hope rather than fear for life after college.

I found some parts of myself during my first quarter at UCSB, as many freshmen do, but most importantly: at my own pace.

Joshen Mantai wants all freshmen to know it’s okay to face an identity crisis in college.